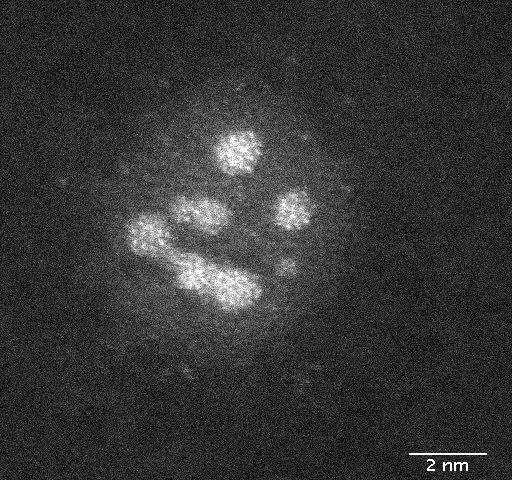 Scientists at the University of Birmingham have captured the formation of a platinum encrusted nanoparticle that bears a striking resemblance to a festive snowman. As well as providing some Christmas cheer, the fully functional ‘nano-snowman’ has applications for providing greener energy and for advancements in medical care.

At only five nanometres in size, the nano-snowman was imaged with an aberration-corrected scanning transmission electron microscope at the Nanoscale Physics, Chemistry and Engineering Research Laboratory at the University of Birmingham.

It was formed unexpectedly from a self-assembled platinum-titanium nanoparticle which was oxidised in air, and features ‘eyes, nose and a mouth’ formed of precious-metal platinum clusters embedded in a titanium dioxide face.

Despite its festive appearance, the nano-snowman performs a serious function of catalysing the splitting of water to make green hydrogen for fuel cells. In this functionality the nanoparticle demonstrates how the inclusion of titanium atoms to a platinum catalyst particle has its benefits.

Platinum is highly functional in performing chemical transformations making it a sought after metal for scientific use. It is also expensive and in critical supply. Therefore, the nano-snowman demonstrates how, by including titanium atoms, the amount of platinum needed is reduced and the existing platinum used is protected against sintering (aggregation of the nanoparticles).

Professor Richard Palmer, head of the University’s Nanoscale Physics Research Lab – the first centre for nanoscience in the UK – leads the way in research on nanoparticle science and explains how this information holds great interest for the Energy and Pharmaceutical industries:

“By combining titanium and platinum atoms in a nanoparticle, we can reduce the need to use rare and expensive platinum, and also maintain that which we have used. This could affect a number of applications where platinum is used such as creating green hydrogen for cleaner energy use; generating low energy electrons in radiotherapy that can kill cancer cells; and to perform chemical transformations to create pharmaceutical products.”

Saeed Gholhaki, one of the scientists to discover the snowman says:

“In the nano regime atoms are the building blocks of nanoscale structures. These building blocks can form wonderful shapes and structures regulated by the laws of nature. Nanoscience is about understanding the physics behind, and thus controlling these phenomenon, ultimately allowing us to design materials with desired properties. Sometimes the building blocks, in this case platinum cores, can assemble in an interesting way to resemble familiar objects like the face of a snowman!”