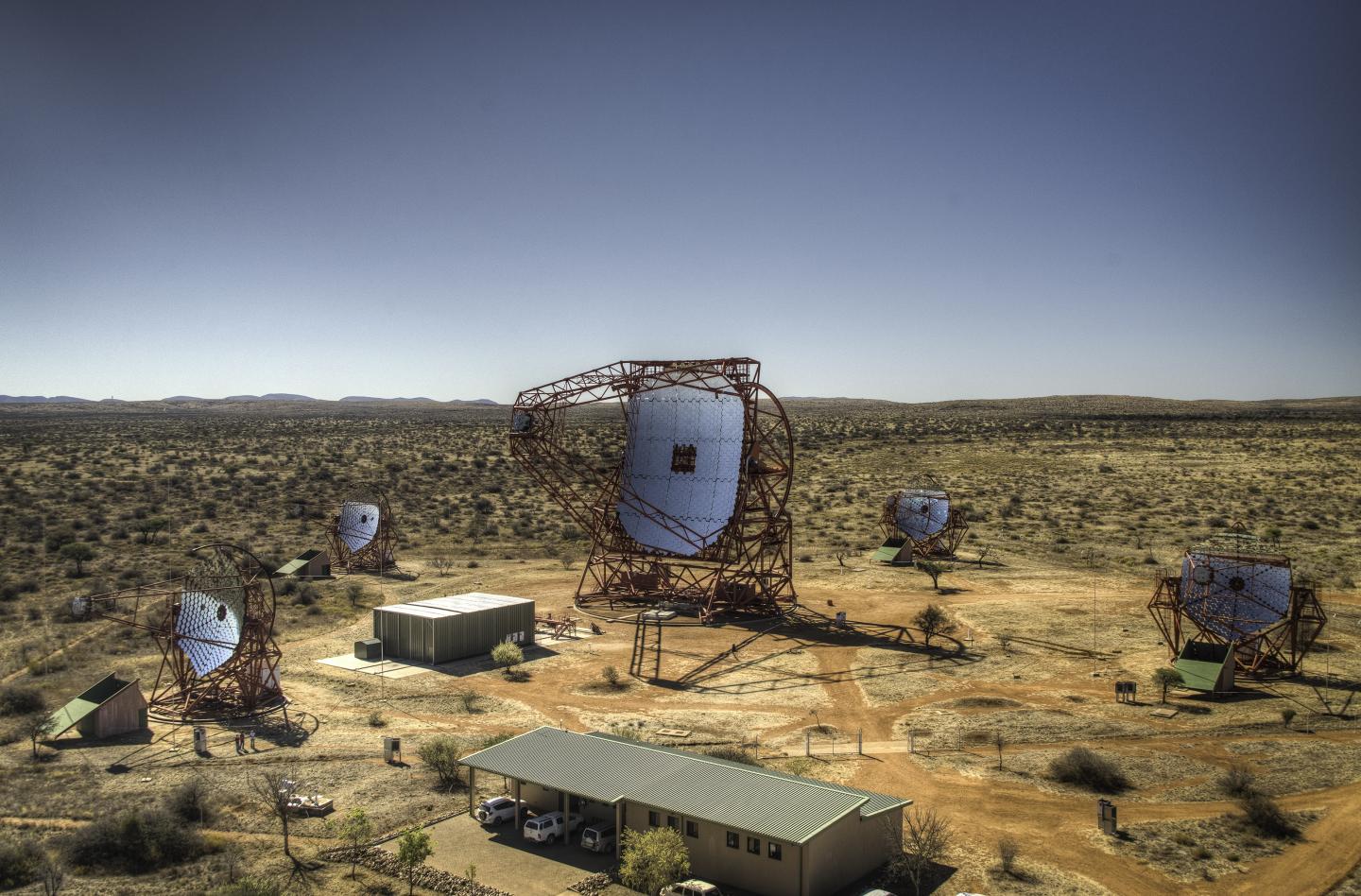 The five telescopes of the High Energy Stereoscopic System (H.E.S.S.), located in Namibia, capture faint flashes that occur when ultrahigh-energy gamma rays are absorbed in the upper atmosphere. A new study of the galactic center combines high-energy observations from H.E.S.S. with lower-energy data from NASA’s Fermi Gamma-ray Space Telescope to show that some of the speediest particles become trapped there. Source:

A combined analysis of data from NASA’s Fermi Gamma-ray Space Telescope and the High Energy Stereoscopic System (H.E.S.S.), a ground-based observatory in Namibia, suggests the center of our Milky Way contains a “trap” that concentrates some of the highest-energy cosmic rays, among the fastest particles in the galaxy.

“Our results suggest that most of the cosmic rays populating the innermost region of our galaxy, and especially the most energetic ones, are produced in active regions beyond the galactic center and later slowed there through interactions with gas clouds,” said lead author Daniele Gaggero at the University of Amsterdam. “Those interactions produce much of the gamma-ray emission observed by Fermi and H.E.S.S.”

Cosmic rays are high-energy particles moving through space at almost the speed of light. About 90 percent are protons, with electrons and the nuclei of various atoms making up the rest. In their journey across the galaxy, these electrically charged particles are affected by magnetic fields, which alter their paths and make it impossible to know where they originated.

But astronomers can learn about these cosmic rays when they interact with matter and emit gamma rays, the highest-energy form of light.

In March 2016, scientists with the H.E.S.S. Collaboration reported gamma-ray evidence of the extreme activity in the galactic center. The team found a diffuse glow of gamma rays reaching nearly 50 trillion electron volts (TeV). That’s some 50 times greater than the gamma-ray energies observed by Fermi’s Large Area Telescope (LAT). To put these numbers in perspective, the energy of visible light ranges from about 2 to 3 electron volts.

The Fermi spacecraft detects gamma rays when they enter the LAT. On the ground, H.E.S.S. detects the emission when the atmosphere absorbs gamma rays, which triggers a cascade of particles resulting in a flash of blue light.

In a new analysis, published July 17 in the journal Physical Review Letters, an international team of scientists combined low-energy LAT data with high-energy H.E.S.S. observations. The result was a continuous gamma-ray spectrum describing the galactic center emission across a thousandfold span of energy.

“Once we subtracted bright point sources, we found good agreement between the LAT and H.E.S.S. data, which was somewhat surprising due to the different energy windows and observing techniques used,” said co-author Marco Taoso at the Institute of Theoretical Physics in Madrid and Italy’s National Institute of Nuclear Physics (INFN) in Turin.

This agreement indicates that the same population of cosmic rays — mostly protons — found throughout the rest of the galaxy is responsible for gamma rays observed from the galactic center. But the highest-energy share of these particles, those reaching 1,000 TeV, move through the region less efficiently than they do everywhere else in the galaxy. This results in a gamma-ray glow extending to the highest energies H.E.S.S. observed.

“The most energetic cosmic rays spend more time in the central part of the galaxy than previously thought, so they make a stronger impression in gamma rays,” said co-author Alfredo Urbano at the European Organization for Nuclear Research (CERN) in Geneva and INFN Trieste.

This effect is not included in conventional models of how cosmic rays move through the galaxy. But the researchers show that simulations incorporating this change display even better agreement with Fermi data.

“The same breakneck particle collisions responsible for producing these gamma rays should also produce neutrinos, the fastest, lightest and least understood fundamental particles,” said co-author Antonio Marinelli of INFN Pisa. Neutrinos travel straight to us from their sources because they barely interact with other matter and because they carry no electrical charge, so magnetic fields don’t sway them.

“Experiments like IceCube in Antarctica are detecting high-energy neutrinos from beyond our solar system, but pinpointing their sources is much more difficult,” said Regina Caputo, a Fermi team member at NASA’s Goddard Space Flight Center in Greenbelt, Maryland, who was not involved in the study. “The findings from Fermi and H.E.S.S. suggest the galactic center could be detected as a strong neutrino source in the near future, and that’s very exciting.”