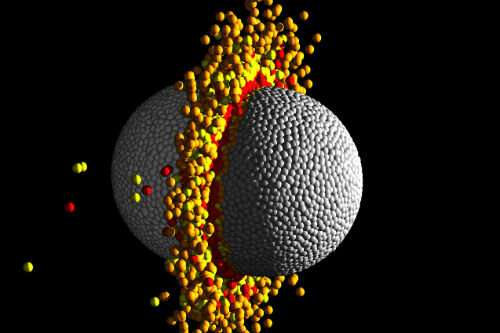 One frame from the middle of a hydrodynamical simulation of a high-speed head-on collision between two 10 Earth-mass planets. The temperature range of the material is represented by four colours grey, orange, yellow and red, where grey is the coolest and red is the hottest. Such collisions eject a large amount of the silicate mantle material leaving a high-iron content, high-density remnant planet similar to the observed characteristics of Kepler-107c. Credit: Zoe Leinhardt and Thomas Denman, University of Bristol

An international team of scientists led by Italy’s National Institute for Astrophysics (INAF) and involving physicists from the University of Bristol spent three years observing the exoplanetary system Kepler-107 via the Telescopio Nazionale Galileo in La Palma.

They gathered more than a hundred spectroscopic measurements of all four sub-Neptune mass planets in Kepler-107 – named after the NASA Kepler space telescope that discovered the exoplanetary system five years ago. Unlike Earth’s relation to the sun, the planets in the Kelper-107 system are much closer to each other and their host star (their equivalent of our sun). All of the planets have an orbital period of days as opposed to years.

It is not uncommon for the planet that is closest to the host star to be the densest due to heating and interaction with the host star which can cause atmosphere loss. However, as reported in Nature Astronomy, in the case of Kepler-107, the second planet, 107c, is denser than the first, 107b. So much so that 107c contains in its core an iron mass fraction at least twice as large as that of 107b, indicating that at some point, 107c had a head-on high-speed giant collision with a protoplanet of the same mass or more collisions with multiple planets of a lower mass. These impacts would have ripped off part of the rock and silicate mantle of Kepler-107c, suggesting that it is denser now than it was originally.

Bristol’s Dr. Zoe Leinhardt, computational astrophysicist and co-author of the paper, from the University of Bristol’s School of Physics, explains: “Giant impacts are thought to have had a fundamental role in shaping our current solar system. The moon is most likely the result of such an impact, Mercury’s high density may be also, and Pluto’s large satellite Charon was likely captured after a giant impact but until now, we hadn’t found any evidence of giant impacts occurring in planetary systems outside of our own.

“If our hypothesis is correct, it would connect the general model we have for the formation of our solar system with a planetary system that is very different from our own.”

Aldo Bonomo, researcher at INAF and lead author, said: “With this discovery we have added another piece in the understanding of the origin of the extraordinary diversity in composition of small exoplanets. We already had evidence that the strong irradiation of the star contributes to such diversity leading to partial or total erosion of the atmospheres of the hottest planets. However, stochastic collisions between protoplanets also play a role, and may produce drastic variations in the internal composition of an exoplanet, as we think it happened for Kepler-107c.”

Co-author Li Zeng, from the Harvard Origins of Life Initiative in the Department of Earth and Planetary Sciences and the Harvard-Smithsonian Center for Astrophysics, added: “This is one out of many interesting exoplanet systems that the Kepler space telescope has discovered and characterized. This discovery has confirmed earlier theoretical work suggesting that giant impact between planets has played a role during planet formation.”

Giant impacts are thought to have occurred in our own solar system. If catastrophic disruptions occur frequently in planetary systems, then astronomers predict finding many other examples like Kepler-107 as an increasing number of exoplanet densities are determined.