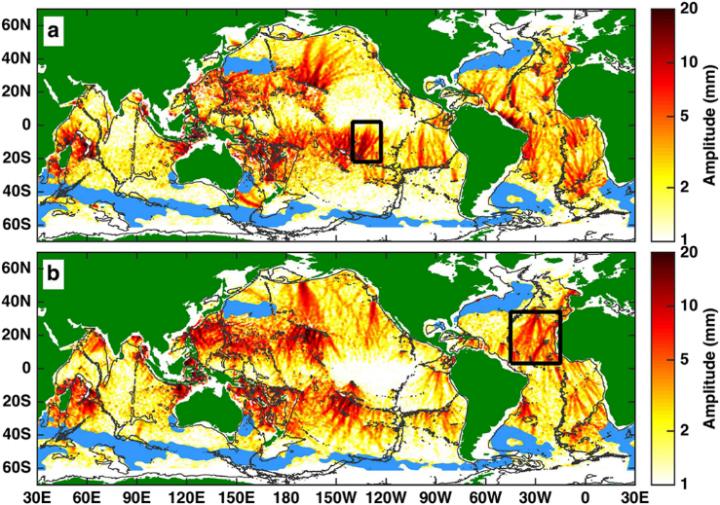 Most of the extra heat trapped by human-generated emissions is ending up in the oceans. But tracking the temperature of the world’s oceans to monitor the change is trickier than it might seem. While satellites monitor surface temperature, measuring the ocean’s interior temperature poses a logistical challenge.

A University of Washington oceanographer has proposed a method to cheaply monitor temperature throughout the depths of the world’s oceans. He improves on a similar method, proposed in the 1970s, that later caused concerns for harming marine mammals. The paper was recently published in Geophysical Research Letters.

“We want to monitor global ocean warming, not just for tomorrow or next year, but for decades,” said author Zhongxiang Zhao, an oceanographer at the UW’s Applied Physics Laboratory. “Using internal tidal waves is cheaper and more reliable than any existing method.”

Satellites can take the temperature of the ocean’s surface. Below the surface only ocean vessels and, more recently, robotic floats that travel vertically through the water can take direct measurements of water temperature. Maintaining these instruments throughout the world’s oceans, however, is expensive.

Acoustic tomography, an idea proposed in the 1970s by one of the world’s most famous oceanographers, Walter Munk, seemed to offer a solution. Sound travels faster in warmer water, so he proposed measuring the time for an acoustic pulse to travel across the ocean. Unfortunately, over time the sonar blasts caused public concern for their harmful impacts on marine mammals, and a major experiment using this method was ended in 2006.

Zhao has developed a way to instead monitor the travel time of internal tidal waves that travel silently in the middle of the ocean. Everyone is familiar with the tides that slosh on beaches at the surface. But the ocean is made up of layers of liquid with different properties that slosh around as they feel the tug of the moon.

“Internal tidal waves start from submarine bumps,” Zhao said, when tidally driven currents pass over an oceanic ridge or other bottom feature. These secondary waves then travel with a wavelength of about 160 kilometers (100 miles) and a speed of 3 to 4 meters per second (7 to 9 miles per hour) depending on latitude. Climate change is warming the upper ocean more quickly than the layers below, and this increases the speed of internal tidal waves.

Zhao’s method uses satellite data to see tiny changes in the height of the ocean’s surface that are caused by water motion deep below.

Zhao has spent about a decade perfecting his method to track these smaller bumps and sort out interference between internal waves. By analyzing the travel times over the past 20 years, he showed a 1 percent increase in speed over that time along two paths in the Atlantic Ocean. He also compared his technique with Argo observations since 2005, showing a good match between the two methods.

“The internal tidal wave is a naturally occurring ocean phenomenon, so monitoring its long-term variability is very cheap,” Zhao said. “This method offers a cost-effective way to measure temperature changes over the whole depth of the ocean.”

The popular Argo oceanographic floats only measure the top 2 kilometers (1.2 miles) of the ocean, less than half the average depth. Upcoming Deep Argo floats aim to monitor to 3 miles depth, where some human-generated heat may be hiding. But new floats would add to the program’s existing $24 million annual budget, and spatial coverage would depend on how many floats were deployed.

The new method takes a satellite’s-eye view of the Earth using tomography, the same imaging technique that is used in many medical practices.

“If you are a doctor, you are scanning the health of your patient — I am like a doctor scanning the Earth, who can see if it is getting a temperature,” Zhao said. “This method offers a long-term, cost-effective, environmentally friendly technique for monitoring global ocean warming.”