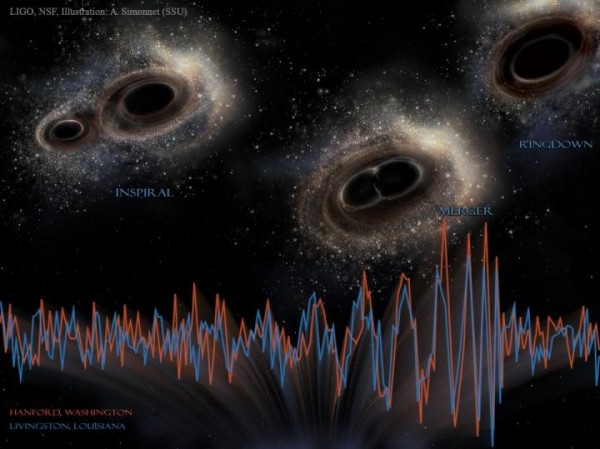 During the initial stage of the merger known as the inspiral, the black holes orbit a common center of mass gradually coming closer to one another. Then the merger proper occurs and most of the gravitational waves are emitted. The red and blue lines at the bottom of the image represent the gravitational signal associated with a black hole merger. Following the merger proper, the now single black hole undergoes oscillations referred to as the ringdown. Credit: LIGO, NSF, Aurore Simonnet (Sonoma State U.)

Scientists from MIPT, the University of Oxford, and the Lebedev Physical Institute of the Russian Academy of Sciences estimated the number of stars disrupted by solitary supermassive black holes in galactic centers formed due to mergers of galaxies containing supermassive black holes. The astrophysicists found out whether gravitational effects arising as two black holes draw closer to one another can explain why we observe fewer stars being captured by black holes than basic theoretical models predict. In their study published in The Astrophysical Journal, the researchers looked into the interplay of various dynamic mechanisms affecting the number of stars in a galaxy that are captured per unit time (tidal disruption rate). An advanced theoretical model yielded results that are even more inconsistent with observations, leading the team to hypothesize that the disruption of stars in galactic nuclei may occur without our knowledge.

Tidal disruption events, or TDEs, are the only available source of information from inactive galactic nuclei. There is at least one supermassive black hole in the center of most galaxies. Surrounded by dense central star clusters, black holes occupy regions known as galactic nuclei. As their name suggests, black holes do not emit any light. However, when matter falls onto the central massive object, it gets heated to extreme temperatures and can be observed with a telescope. Active galaxies have gas clouds that feed the black hole thus making it visible. However, most of the galaxies–approximately 90 percent of them–remain “silent” because there are no gas clouds in them and so there is no matter for the black hole to feed on, except for stars that occasionally stray too close to it. When this happens, the star is pulled apart by tidal forces, experiencing what is known as spaghettification, and astronomers detect a tidal disruption event (TDE). So far, around 50 flares of radiation linked to TDEs have been observed. It is reckoned that the average rate of stellar disruption amounts to one star per 10,000 to 100,000 years per galaxy. Based on this data, the scientists are trying to develop a reliable model of what goes on in inactive galactic nuclei.

Assume a spherical galaxy in a vacuum…

The simplest theoretical model involves a galaxy whose nucleus is spherical in shape and has a supermassive black hole at its center. The black hole is orbited by stars that change the direction of their motion as they pass by one another, the way billiard balls bounce off one another when they collide on the table. However, whereas a billiard ball needs to be moving straight toward the hole to fall into it, a star has more options: It is enough for its velocity vector to be in the so-called loss cone, to ensure that the star will eventually be captured and disrupted by the black hole’s gravity. According to this very simple model, an average of one star per galaxy should be captured every 1,000 to 10,000 years, i.e., more frequently than observed. Although the model can be improved by taking a number of other factors into account (e.g., the difference in the mass of stars), this would only further increase the predicted tidal disruption rates.

At present, there is only one mechanism discussed in published sources that could be responsible for the fact that fewer stars are captured than expected. Curiously, it requires that most of the low-angular-momentum stars vanish, so to speak. But let us first examine an analogous case involving gas diffusion. Suppose there are gas molecules in random motion contained inside a vessel whose walls can absorb the molecules. Now imagine the molecules closest to the walls have been removed. The obvious consequence of this would be less molecules absorbed per unit time, since the remaining molecules have yet to travel a certain distance before they can come in contact with a wall. Similarly, if stars are removed from the center of the galaxy, the stellar disruption rate will fall. Naturally, the stars cannot simply vanish into thin air; but if the galaxy hosts a binary black hole, then individual stars can be ejected from the galaxy by means of a so-called gravitational slingshot, a maneuver also known as a gravity assist when man-made spacecraft are involved.

The law of conservation of energy implies that when a star is accelerated (i.e., receives additional kinetic energy), the energy of the binary black hole must be reduced. As a result, the two black holes draw closer to one another and begin to merge. Eventually, when the merger is almost complete, some of the energy is radiated outward in the form of gravitational waves, as demonstrated by this recent sensational discovery.

A nonspherical galaxy in a vacuum

Although a galaxy merger can be accompanied by a decrease in the rate of star disruption, the opposite effect has also been observed. It has to do with the fact that any galactic nucleus which is a product of a merger is slightly nonspherical in shape. In a nonspherical nucleus, stars are more thoroughly intermixed; hence, there are more stars whose orbits lie close to the black hole. This means that more stars are available to be captured and the TDE rate goes up, in spite of the slingshot effect. To find out how the interplay of these two opposing factors impacts the rate of stellar disruption, Kirill Lezhnin and Eugene Vasiliev–both MIPT graduates–performed the necessary calculations and investigated the influence that black hole mass, nuclear star cluster geometry, and initial conditions have on disruption rates.

It turned out that the effect of the removal of stars from the center of the galaxy by means of the gravitational slingshot was negligible in all cases except for the spherical-galaxy-in-a-vacuum scenario. It should be noted, however, that the shape of a galaxy formed in a merger is never a perfect sphere. As far as the results of calculations are concerned, the bottom line is that an average of one star per 10,000 years per galaxy should be disrupted. And while this number is in good agreement with prior theoretical predictions, it also begs the question: Why is it the case that fewer TDEs are observed than theoretical models would have us expect?

Kirill Lezhnin, one of the authors of the study and a researcher at MIPT’s Laboratory of Astrophysics and Physics of Nonlinear Processes, explains the significance of the research findings: “We showed that the observed low disruption rates cannot be accounted for by the slingshot effect. Therefore, another mechanism needs to be found which lies outside the realm of stellar dynamics studies. Alternatively, the TDE rates we arrived at could in fact be accurate. We then need to find an explanation as to why they are not observed.”