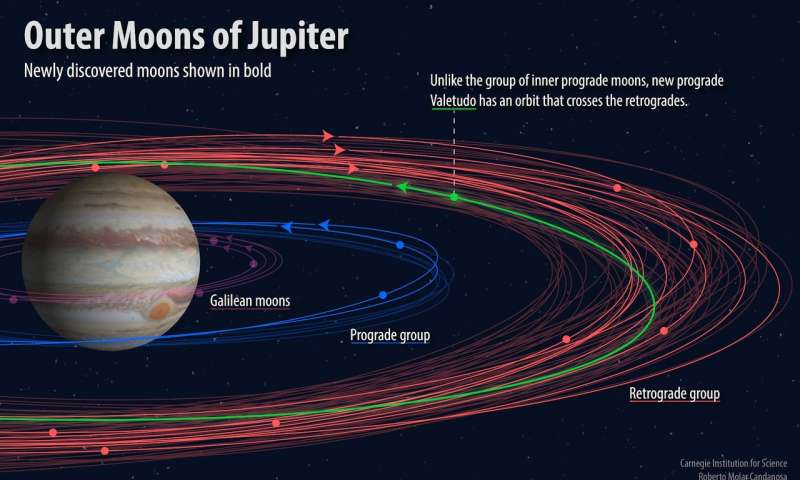 Various groupings of Jovian moons with the newly discovered ones shown in bold. The ‘oddball,’ called Valetudo after the Roman god Jupiter’s great-granddaughter, has a prograde orbit that crosses the retrograde orbits. Credit: By Roberto Molar-Candanosa, courtesy of Carnegie Institution for Science.

Twelve new moons orbiting Jupiter have been found—11 “normal” outer moons, and one that they’re calling an “oddball.” This brings Jupiter’s total number of known moons to a whopping 79—the most of any planet in our Solar System.

A team led by Carnegie’s Scott S. Sheppard first spotted the moons in the spring of 2017 while they were looking for very distant Solar System objects as part of the hunt for a possible massive planet far beyond Pluto.

In 2014, this same team found the object with the most-distant known orbit in our Solar System and was the first to realize that an unknown massive planet at the fringes of our Solar System, far beyond Pluto, could explain the similarity of the orbits of several small extremely distant objects. This putative planet is now sometimes popularly called Planet X or Planet Nine. University of Hawaii’s Dave Tholen and Northern Arizona University’s Chad Trujillo are also part of the planet search team.

“Jupiter just happened to be in the sky near the search fields where we were looking for extremely distant Solar System objects, so we were serendipitously able to look for new moons around Jupiter while at the same time looking for planets at the fringes of our Solar System,” said Sheppard.

“It takes several observations to confirm an object actually orbits around Jupiter,” Williams said. “So, the whole process took a year.”

Nine of the new moons are part of a distant outer swarm of moons that orbit it in the retrograde, or opposite direction of Jupiter’s spin rotation. These distant retrograde moons are grouped into at least three distinct orbital groupings and are thought to be the remnants of three once-larger parent bodies that broke apart during collisions with asteroids, comets, or other moons. The newly discovered retrograde moons take about two years to orbit Jupiter.

Two of the new discoveries are part of a closer, inner group of moons that orbit in the prograde, or same direction as the planet’s rotation. These inner prograde moons all have similar orbital distances and angles of inclinations around Jupiter and so are thought to also be fragments of a larger moon that was broken apart. These two newly discovered moons take a little less than a year to travel around Jupiter.

“Our other discovery is a real oddball and has an orbit like no other known Jovian moon,” Sheppard explained. “It’s also likely Jupiter’s smallest known moon, being less than one kilometer in diameter”.

As a result, head-on collisions are much more likely to occur between the “oddball” prograde and the retrograde moons, which are moving in opposite directions.

“This is an unstable situation,” said Sheppard. “Head-on collisions would quickly break apart and grind the objects down to dust.”

It’s possible the various orbital moon groupings we see today were formed in the distant past through this exact mechanism.

The team think this small “oddball” prograde moon could be the last-remaining remnant of a once-larger prograde-orbiting moon that formed some of the retrograde moon groupings during past head-on collisions. The name Valetudo has been proposed for it, after the Roman god Jupiter’s great-granddaughter, the goddess of health and hygiene.

Elucidating the complex influences that shaped a moon’s orbital history can teach scientists about our Solar System’s early years.

For example, the discovery that the smallest moons in Jupiter’s various orbital groups are still abundant suggests the collisions that created them occurred after the era of planet formation, when the Sun was still surrounded by a rotating disk of gas and dust from which the planets were born.

Because of their sizes—one to three kilometers—these moons are more influenced by surrounding gas and dust. If these raw materials had still been present when Jupiter’s first generation of moons collided to form its current clustered groupings of moons, the drag exerted by any remaining gas and dust on the smaller moons would have been sufficient to cause them to spiral inwards toward Jupiter. Their existence shows that they were likely formed after this gas and dust dissipated.

The initial discovery of most of the new moons were made on the Blanco 4-meter telescope at Cerro Tololo Inter-American in Chile and operated by the National Optical Astronomical Observatory of the United States. The telescope recently was upgraded with the Dark Energy Camera, making it a powerful tool for surveying the night sky for faint objects. Several telescopes were used to confirm the finds, including the 6.5-meter Magellan telescope at Carnegie’s Las Campanas Observatory in Chile; the 4-meter Discovery Channel Telescope at Lowell Observatory Arizona (thanks to Audrey Thirouin, Nick Moskovitz and Maxime Devogele); the 8-meter Subaru Telescope and the Univserity of Hawaii 2.2 meter telescope (thanks to Dave Tholen and Dora Fohring at the University of Hawaii); and 8-meter Gemini Telescope in Hawaii (thanks to Director’s Discretionary Time to recover Valetudo). Bob Jacobson and Marina Brozovic at NASA’s Jet Propulsion Laboratory confirmed the calculated orbit of the unusual oddball moon in 2017 in order to double check its location prediction during the 2018 recovery observations in order to make sure the new interesting moon was not lost.