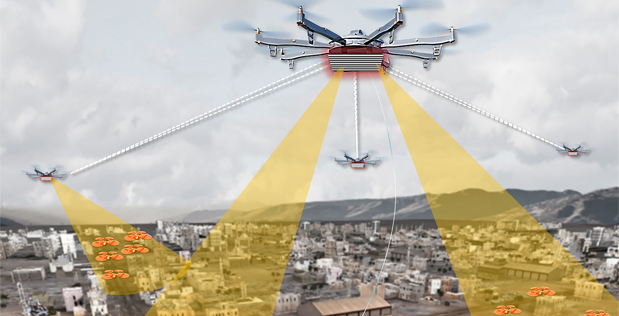 Airspace for the flying public today is perpetually congested yet remarkably safe, thanks in no small part to a well-established air traffic control system that tracks, guides and continuously monitors thousands of flights a day. When it comes to small unmanned aerial systems (UAS) such as commercial quadcopters, however, no such comprehensive tracking system exists. And as off-the-shelf UAS become less expensive, easier to fly, and more adaptable for terrorist or military purposes, U.S. forces will increasingly be challenged by the need to quickly detect and identify such craft—especially in urban areas, where sight lines are limited and many objects may be moving at similar speeds.

Although several systems are being developed for tracking small UAS by extending surveillance methods used in open areas where large line-of-sight buffers mitigate the threat, these systems are impractical for operation in urban terrain. Aerial Dragnet seeks to leapfrog these approaches by developing systems adapted to the fundamental physics of small UAS in urban environments that could enable non-line-of-sight (NLOS) tracking and identification of a wide range of slow, low-flying threats. The program seeks an array of innovative approaches, but notionally envisions a network of surveillance nodes, each providing coverage of a neighborhood-sized urban area, perhaps mounted on tethered or long-endurance UAS. Using sensor technologies that can look over and between buildings, the surveillance nodes would maintain UAS tracks even when the craft disappear from sight around corners or behind objects. The output of the Aerial Dragnet system would be a continually updated common operational picture (COP) of the airspace at altitudes below where current aircraft surveillance systems can monitor, disseminated electronically to authorized users via secure data links. Because of the large market for inexpensive small UAS, the program will focus on combining low cost sensor hardware with software-defined signal processing hosted on existing UAS platforms. The resulting surveillance systems would thus be cost-effectively scalable for larger coverage areas and rapidly upgradable as new, more capable and economical versions of component technologies become available.