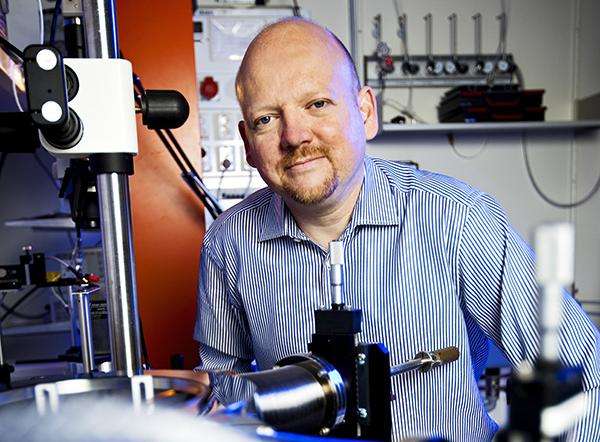 Johan Åkerman was the principal investigator in this study. (Credit: Johan Wingborg)

What do fire flies, Huygens’s wall clocks, and even the heart of choir singers, have in common? They can all synchronize their respective individual signals into one single unison tone or rhythm.

Now researchers at University of Gothenburg have taught two different emerging classes of nano-scopic microwave signal oscillators, which can be used as future spintronic neurons, to sing in unison with their neighbours.

Earlier this year, they announced the first successful synchronization of five so-called nano-contact spin torque oscillators. In that system, one of the nano-contacts played the role of the conductor, deciding which note to sing, and the other nano-contacts happily followed her lead. This synchronized state was best described as driven and directional, since every nano-contact in the chain only listened to its upstream neighbor, adjusted its own frequency in accordance, and then enforced this frequency on the next neighbor downstream. The interaction strength is the same between each neighbor and the chain can hence be made very long without any oscillator singing out of tune.

This time around the same research group has demonstrated synchronization of as many as nine nano-constriction based spin Hall nano-oscillators. In this system, there is no conductor. Instead the organization is entirely flat with each oscillator now listening to both its neighbors. As a consequence, the note is decided in a democratic manner, with the final unison state being an agreed on compromise between all the original individual frequencies. The synchronized state is hence best described as both mutual and bi-directional. This means that information can now travel in both directions and a perturbation at any location along the oscillator chain can lead to an adjustment of the tone of the entire choir.

By making use of the spin Hall effect, not only to power each oscillator but also to enhance the coupling between the nano-constrictions, the authors were also able to synchronize two oscillators separated by up to 4 micrometers.

“As the nano-constrictions are only 100 nm in size, this would correspond to a line of nine singers, each singer standing some 80 meters from its nearest neighbor, and still all singers staying in tune,” says Ahmad Awad, the first author of the study. “The synchronization is hence very robust”.

The researchers envision that both types of oscillators can play key parts in future oscillatory networks for wave based neuromorphic computing. For example, inputs and outputs from the network require directionality to make sure the information travels in the correct direction and that the outputs are unperturbed by any potential interference or other spurious signals. However, inside the network, one wants to make use of the parallelism and the collective response of all oscillators. This hence requires bi-directionality and mutual synchronization within the network itself.

Says Prof. Johan Åkerman, the principal investigator behind the results: “The demonstration of the key concepts of both driven and mutual synchronization in nano-scopic microwave oscillators is really only the first step. The robustness of our results now give us the design freedom to explore oscillator networks of any size using a wide range of different layouts only limited by one’s imagination. Add the potential for neuromorphic computing and you can see why we are so excited!”