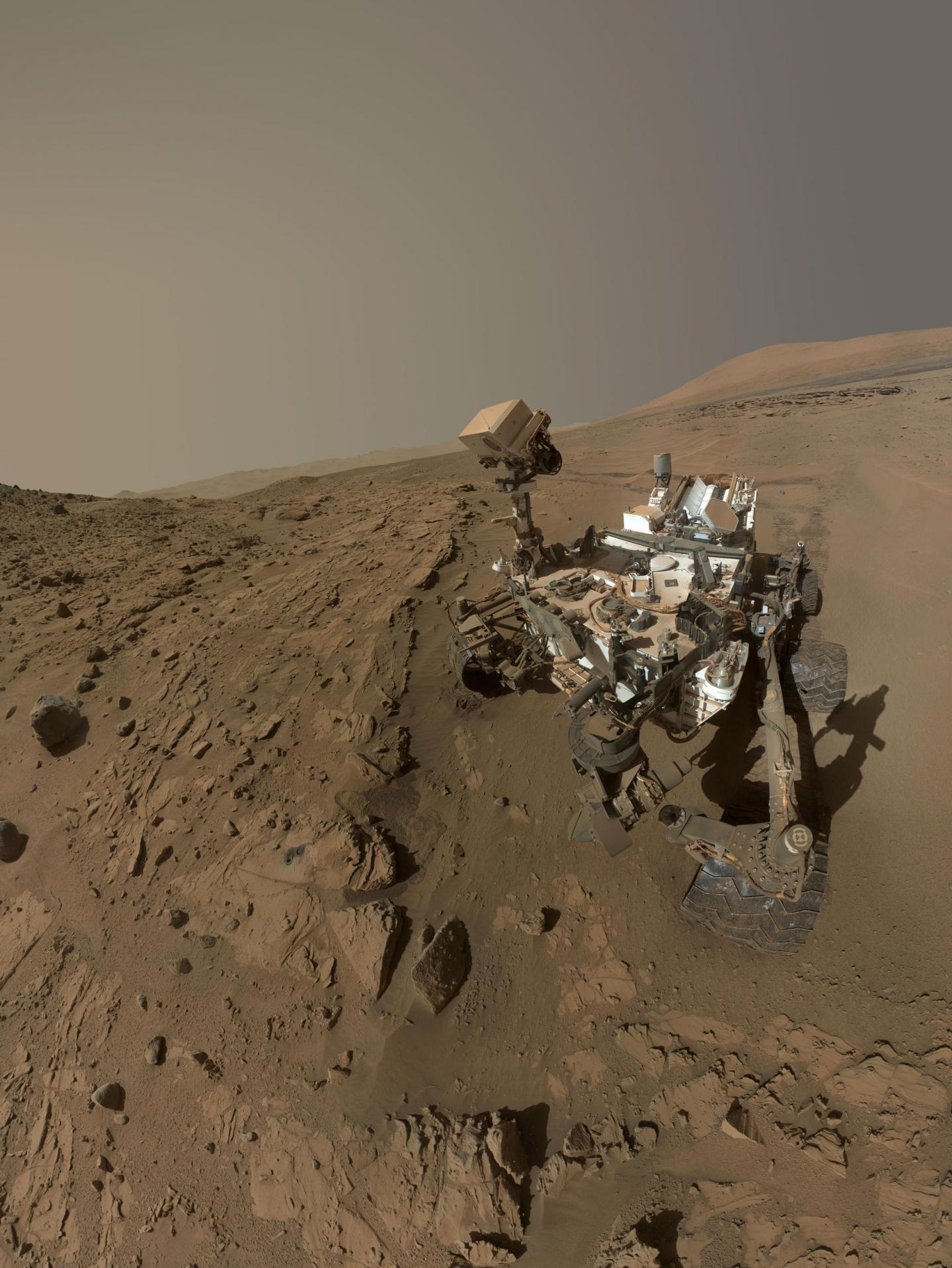 A composite self-portrait by NASA’s Mars Curiosity Rover taken at the Windjana site in Gale Crater.

NASA’s Curiosity rover has discovered new “tough” organic molecules in three-billion-year-old sedimentary rocks on Mars, increasing the chances that the record of habitability and potential life could have been preserved on the Red Planet, despite extremely harsh conditions on the surface that can easily break down organic molecules.

“The Martian surface is exposed to radiation from space and harsh chemicals that break down organic matter, so finding ancient organic molecules in the top five centimeters, from a time when Mars may have been habitable, bodes well for us to learn the story of organic molecules on Mars with future missions that will drill deeper,” said lead author Jen Eigenbrode of NASA’s Goddard Space Flight Center. (She also happens to be a former Carnegie postdoc at our Geophysical Laboratory.)

Organic molecules contain carbon and hydrogen, and can include oxygen, nitrogen, and other elements. Organic compounds are commonly associated with life, although they can be created by non-biological processes as well, processes referred to as abiotic organic chemistry. There is no way for Curiosity to determine if the materials it found came from ancient Martian life or not, according to Eigenbrode.

“Whether it holds a record of ancient life, is the food for extant life, or has existed in the absence of life, organic matter in Martian materials holds chemical clues to planetary conditions and processes,” Eigenbrode said.

Carnegie’s Andrew Steele was a key member of the research team, whose work on this project built off his discovery six years ago of indigenous organic carbon in 10 Martian meteorites. The organic molecules he found in 2012 are comparable to those found by Curiosity.

Like the meteoric samples, the rocks sampled by Curiosity must be heated by the rover’s instruments to very high temperatures, ranging between 500 and 800 degrees Celsius (932 and 1,472 degrees Fahrenheit), to have their organics released as gas. Because the hydrocarbons were released at such high temperatures, they may be coming from bigger, tough organic molecules within the rock.

Sedimentary rocks (mudstones) were drilled from four areas at the base of Mount Sharp, the central mound in Gale crater. Although the surface of Mars is inhospitable today, there is evidence that in the distant past, the Martian climate allowed the presence of liquid water-an essential ingredient for life-at the surface.

Analysis by Curiosity indicates that billions of years ago, a lake inside Gale crater held all the ingredients necessary for life, including chemical building blocks, energy sources, and liquid water. The mudstone gradually formed from silt that settled out of the water and accumulated at the bottom of the lake. Scientists estimated the age of the rocks by the crater count method. Since meteorite impact craters accumulate over time, the more craters a region has, the older it is. Although there was no way to directly date the organic material found within the rocks, it has to be at least as old as the rocks themselves.

The results indicate organic carbon concentrations on the order of 10 parts per million or more. This is close to the amount of observed in Martian meteorites and about 100 times greater than prior in-situ detections of organic carbon. Some of the molecules identified include thiophenes, benzene, toluene, and small carbon chains, such as propane or butene.

Organic molecules containing chlorine were detected on Mars before.

Finding ancient carbon preserved right on the Martian surface gives scientists confidence that NASA’s Mars 2020 rover and the European Space Agency’s ExoMars rover will find even more organics, both on the surface and in the shallow subsurface.

“Are there signs of life on Mars?” asks Michael Meyer, NASA Program Scientist for the Mars Science Laboratory mission. “We don’t know but these results tell us we are on the right track.”

Steele says that the next steps must be looking for organic compounds that are released from the rock samples at lower temperatures.

“The next target is material that comes out when heated to less than 600 degrees Celsius, which is where the molecules are that will provide evidence of biological activity or the kinds of abiotic chemistry that could give rise to life,” he said.

Adapted from an article provided courtesy of NASA.