If Alexander Yulaev and his colleagues had their druthers, they’d do away with whiskers altogether. These scientists don’t have anything against facial hair, but they would love to eliminate the whisker-like filaments that can short out the next-generation lithium batteries that are potentially safer and more efficient than conventional lithium-ion batteries.

Using real-time nanoscale imaging techniques, researchers at the National Institute of Standards and Technology (NIST) and their colleagues have now documented the movement of lithium as it cycles across a next-generation lithium battery made entirely of solid components. By studying lithium cycling in different environments — when exposed to varying concentrations of molecular oxygen — the team determined the optimal conditions to avoid or stem the growth of lithium whiskers.

A technology still in its infancy, lithium solid-state batteries may ultimately supersede the industry standard for the past 25 years, the lithium-ion battery. A standard lithium-ion battery contains a liquid electrolyte. An electrically conducting substance, it enables the movement of ions from the positively charged terminal (cathode) to the negatively charged electrical terminal (anode) during charging and the reverse of that process during discharging. The solid-state battery has a thin film of solid electrolytes and therefore is more compact, lighter in weight and has the potential to store more energy. And because the solid-state device has a solid rather than liquid electrolyte, it can’t catch on fire the way lithium-ion batteries in cell phones sometimes have.

During charging, lithium ions in a solid-state battery move through the solid electrolyte in order to travel from the cathode to anode. In that process, some of the ions inevitably accumulate on the surface of the anode as lithium atoms instead of inserting themselves into the layered structure of the anode’s interior.

To ensure that that the solid-state battery operates flawlessly and can store energy at peak capacity, lithium must be deposited on the anode uniformly.

But that can prove challenging. As lithium atoms congregate on the anode they sometimes grow in clumps that evolve into isolated nanostructures, such as whisker-like filaments. The whiskers can be a recipe for disaster. 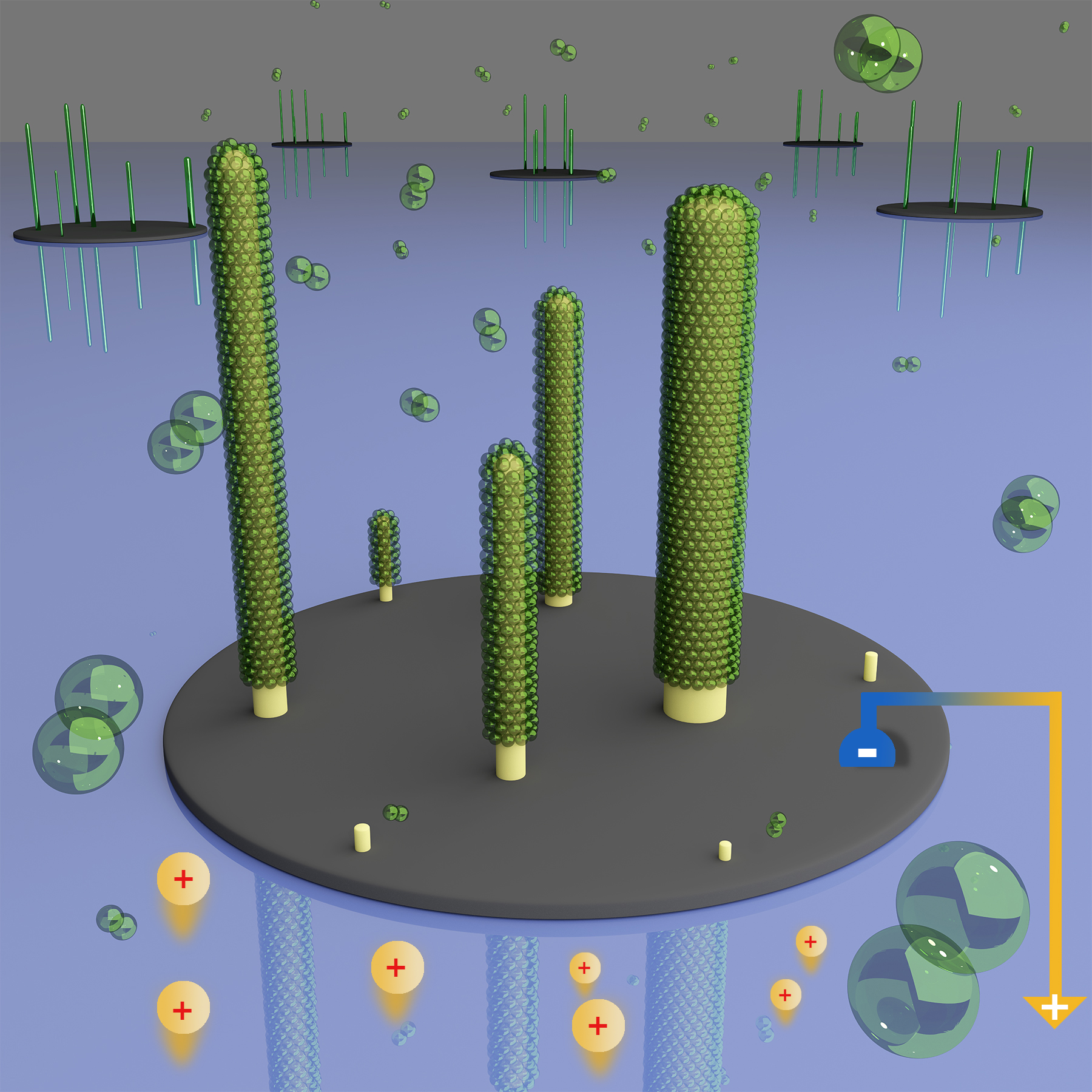 Artist’s view of a model lithium solid-state battery shows lithium nanowires (yellow) protruding from carbon pads (gray) that act as electrodes. The presence of molecular oxygen (green) forms a lithium-oxide shell that encapsulates the lithium and restricts its uniform, three-dimensional growth. The fine balance between the battery charging rate and the concentration of molecular oxygen and other oxidizing species determines the ultimate shape of the lithium deposits, which is critical to the optimal operation of a lithium solid-state battery. Image: A. Yulaev/NIST

The whiskers protrude from the anode and may even touch the cathode, shorting out the circuit and destroying the battery. Controlling both the plating and stripping of lithium atoms on the anode is therefore essential for keeping lithium solid-state batteries in good working condition.

The team used a scanning electron microscope to record images and videos of lithium activity while the battery was in operation. The researchers relied on Auger electron spectroscopy, in which an electron beam induces surface atoms to emit electrons, in order to measure the changes in chemical composition of the anode.

Yulaev and his collaborators found that a balance between several competing factors influenced how lithium atoms are distributed on the anode: the rate at which lithium atoms arrived at the terminal and the concentration of molecular oxygen or other oxidizing impurities that react with lithium atoms.

Somewhat to their surprise, the researchers found that higher concentrations of molecular oxygen prevented lithium from forming whiskers. The team suggests that the large oxygen concentration led to a thicker shell of lithium oxide, which newly arriving lithium atoms cannot penetrate. The underlying lithium atoms retained their uniform distribution inside the anode.

Yulaev of NIST and the University of Maryland, along with NIST physicist Andrei Kolmakov and collaborators from Sandia National Laboratories and Michigan State University, described their findings in a recent issue of Nano Letters.

The results demonstrate the important role that trace amounts of molecular oxygen or other oxidizing agents play in the operation of solid-state batteries, Yulaev says.