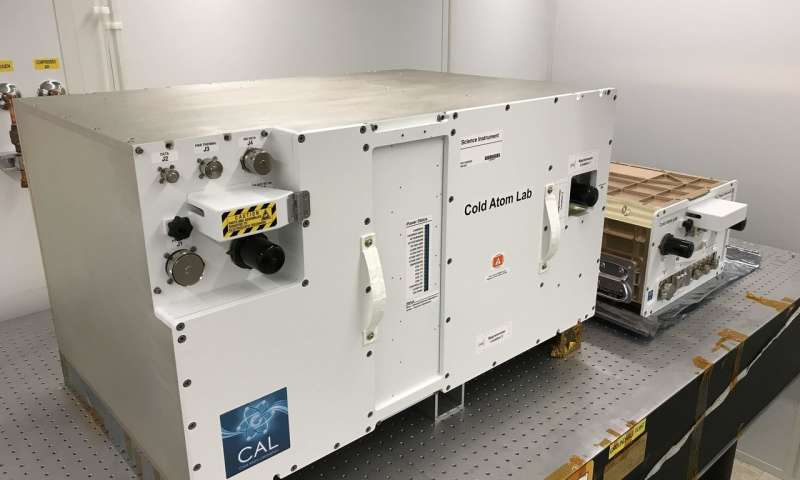 NASA scientists have, for the first time, developed a way to conduct daily studies of ultracold atoms over long periods of time.

BECs, which can reach temperatures just above absolute zero, the point where atoms should theoretically stop moving entirely, have never previously been produced in orbit.

The scientists produced the BECs from atoms of rubidium, with temperatures as low as 100 nanokelvin, significantly colder than the average temperature in space, about three Kelvin.

At ultracold temperatures, the atoms in a BEC will start to behave atypical to how they behave on Earth. BECs are characterized as a fifth state of matter, distinct from gases, liquids, solids and plasma.

The atoms in BECs will act more like waves than particle, although the wave nature of atoms is only observable at microscopic scales.

However, because BECs make this phenomenon macroscopic, they are easier to study.

The ultracold atoms all assume their lowest energy state and take on the same wave identity to become indistinguishable from one another.

The atom clouds together act like a single super atom, rather than individual atoms.

“CAL is an extremely complicated instrument,” Robert Shotwell, chief engineer of JPL’s astronomy and physics directorate, who has overseen the challenging project since February 2017, said in a statement. “Typically, BEC experiments involve enough equipment to fill a room and require near-constant monitoring by scientists, whereas CAL is about the size of a small refrigerator and can be operated remotely from Earth. It was a struggle and required significant effort to overcome all the hurdles necessary to produce the sophisticated facility that’s operating on the space station today.”

CAL is a multi-user facility that focuses on the study of the fundamental law of nature using ultracold quantum gases in microgravity. Cold atoms are long-lived, precisely controlled quantum particles could provide the ideal platform to study quantum phenomena and be used in potential quantum technology applications. The Cold Atom Laboratory launched to the space station on May 21, 2018, aboard a Northrop Grumman (formerly Orbital ATK) Cygnus spacecraft from NASA’s Wallops Flight Facility in Virginia.

The NASA facility is the first of its kind in space and is designed to give scientists the ability to make precision measurements of gravity, probing long-standing problems in quantum physics and exploring the wavelike nature of matter.

“Having a BEC experiment operating on the space station is a dream come true,” Robert Thompson, CAL project scientist and a physicist at NASA’s Jet Propulsion Laboratory in Pasadena, said in a statement. “It’s been a long, hard road to get here, but completely worth the struggle, because there’s so much we’re going to be able to do with this facility.”

BECs were first produced in the lab in 1995 after being predicted by physicists Satyendra Nath Bose and Albert Einstein 71 years earlier.