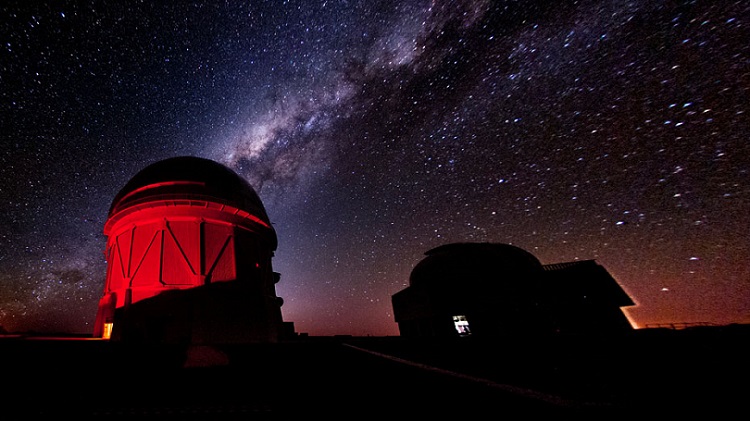 After scanning in depth about a quarter of the southern skies for six years and cataloguing hundreds of millions of distant galaxies, the Dark Energy Survey (DES) finished taking data January 9, 2019. The National Center for Supercomputing Applications (NCSA) at the University of Illinois will continue refining and serving this data for use by scientists into 2021.

The survey is an international collaboration that began mapping a 5,000-square-degree area of the sky on August 18, 2013, to search for evidence of dark energy, the mysterious force that is accelerating the expansion of the universe. Using the Dark Energy Camera, a 520-megapixel digital camera mounted on the Blanco 4-meter telescope at the Cerro Tololo Inter-American Observatory in Chile, scientists on DES took data for 758 nights over six years.

Over those nights, the survey generated 50 terabytes (that’s 50 trillion bytes) of data over its six observation seasons. That data is stored and analyzed at NCSA. Compute power for the project comes from NCSA’s NSF-funded Blue Waters supercomputer, the University of Illinois Campus Cluster, and Fermilab. “Even after observations end, NCSA will continue to support the science productivity of the collaboration by making refined data releases and serving the data well into the 2020s,” said Don Petravick, Senior Project Manager, Dark Energy Survey at NCSA. “We anticipate that this data will continue to enable breakthroughs in scientific applications and opportunities for discovery not only to astronomers but also data scientists.”

DES recorded data from nearly a billion galaxies that are billions of light-years from Earth. More than 400 scientists from over 25 institutions around the world have been involved in the project. This collaboration has already produced about 200 academic papers, with more to come.

The first step in that process, according to Fermilab’s Josh Frieman, former director of DES, is to find the signal in all the noise. “We’re trying to extract this signal of cosmology in a background of all sorts of non-cosmological stuff that gets imprinted on the data,” Frieman said. “It’s a massive ongoing effort from many different people around the world.”

According to DES Director Rich Kron, a Fermilab and University of Chicago scientist, those results and the scientists who made them possible are where much of the real accomplishment of DES lies.

“First generations of students and post-doctoral researchers on DES are now becoming faculty at research institutions and are involved in upcoming sky surveys,” Kron said. “The number of publications and people involved are a true testament to this experiment. Helping to launch so many careers has always been part of the plan, and it’s been very successful.”

DES scientists also spotted the first visible counterpart of gravitational waves ever detected, a collision of neutron stars that occurred 130 million years ago. DES was one of several sky surveys that detected this gravitational wave source, opening the door to a new kind of astronomy.

DES remains one of the most sensitive and comprehensive surveys of distant galaxies ever performed. The Dark Energy Camera is capable of seeing light from galaxies billions of light-years away, and capturing it in unprecedented quality. The Dark Energy Camera will remain mounted to the telescope at Cerro Tololo, and will continue to be a useful instrument for scientific collaborations around the world. With one era at an end, the next era of the Dark Energy Survey is just beginning.

The DES collaboration continues to release scientific results from their storehouse of data. Highlights from the previous years include: