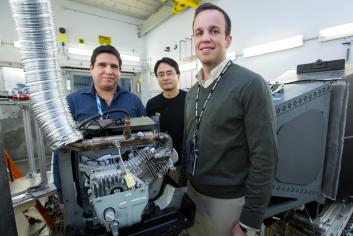 Researchers used neutrons to probe a running engine at ORNL’s Spallation Neutron Source, giving them the opportunity to test an aluminum-cerium alloy under operating conditions. From left, researchers Orlando Rios, Ke An, and Lt. Eric Stromme show off a cylinder head made from the new alloy. Source: ORNL

In a first-of-a-kind experiment, researchers used neutrons to investigate the performance of a new aluminum alloy in a gasoline-powered engine—while the engine was running.

A team from the Department of Energy’s Oak Ridge National Laboratory worked with industry partners to perform the test, which looked at whether a high-performance alloy that is promising for automotive applications held up under the heat and stress of an internal combustion engine.

The feat was a first for the Spallation Neutron Source, said Ke An, lead instrument scientist for the facility’s VULCAN instrument. “This was the first time an internal combustion engine has been run on our diffractometer, and, as far as we know, on any other,” he stated.

The unique properties of neutrons allow them to penetrate materials in a nondestructive fashion, revealing fundamental details about a material’s atomic structure. VULCAN uses neutrons to measure strain and stress on large industrial samples, which made it ideal for evaluating a cylinder head cast from an aluminum-cerium alloy ORNL developed in partnership with Eck Industries.

ORNL materials scientist Orlando Rios, who has been working through the Critical Materials Institute to explore the use of cerium as a strengthening agent for aluminum alloys, led the experiment.

“Our experiment confirmed that our alloy outperforms other aluminum alloys at elevated temperatures,” Rios said.

“The automotive industry is currently interested in alloys that can hold up to high-heat demands of new, energy-efficient technologies,” he explained. “Our aluminum-cerium composition shows exceptional stability at temperatures above 500 degrees Celsius [932 degrees Fahrenheit], which is unheard of for aluminum alloys.”

Lt. Eric Stromme, a Navy Tours with Industry Fellow who assisted on the project, added, “With an aluminum alloy stable at high temperatures, engines could run hotter, and components could be made lighter, boosting efficiency and fuel economy.”

Over the three-day experiment—with the engine stopping and restarting via a remote ignition from VULCAN’s control room—neutron diffraction allowed the researchers to “see” the high-temperature stability of Al-Ce during the engine’s operating regime.

“We really took the engine through its paces. It was probably the loudest experiment to take place at SNS,” noted Rios, who worked on the project with ORNL postdoc Michael Kesler and University of Tennessee Bredesen Center Fellow Zachary Sims.

“The entire team was impressed by the quality of the data from VULCAN, especially given that the neutrons had to travel through an entire engine structure before being observed by our detectors to supply information on the cylinder head at work,” Rios said. “That is truly remarkable.”

An added, “What we have accomplished is a proof-of-concept to prove the feasibility and value of this kind of experiment.”

An noted the effectiveness of collaborating across disciplines between ORNL and industry partners to support the effort. He is currently working to streamline the process for future VULCAN users.

“This was a fundamental experiment not only to better understand this alloy but also to provide some broader analysis that will allow new alloys, not only aluminum compounds, to be processed in this way,” Rios said. “The experiment demonstrates the benefits of coupling fundamental science with early stage research and development of new materials and technologies. We hope what we are learning through this experiment can be applied to many other materials in a wide range of applications.”