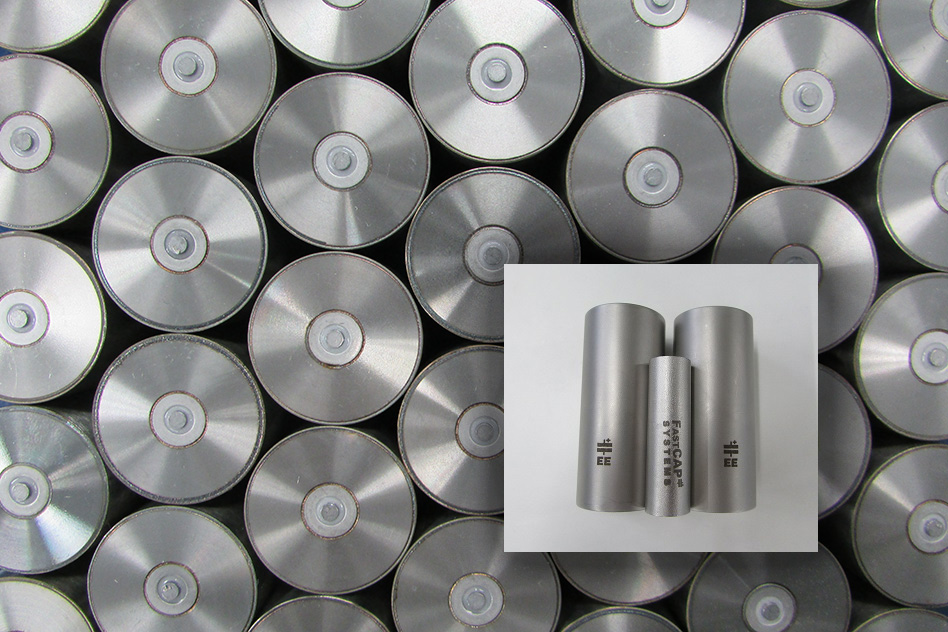 FastCAP Systems’ ultracapacitors (pictured) can withstand extreme temperatures and harsh environments, opening up new uses for the devices across a wide range of industries, including oil and gas, aerospace and defense, and electric vehicles. Source: Courtesy of FastCAP Systems

Devices called ultracapacitors have recently become attractive forms of energy storage: They recharge in seconds, have very long lifespans, work with close to 100 percent efficiency, and are much lighter and less volatile than batteries. But they suffer from low energy-storage capacity and other drawbacks, meaning they mostly serve as backup power sources for things like electric cars, renewable energy technologies, and consumer devices.

But MIT spinout FastCAP Systems is developing ultracapacitors, and ultracapacitor-based systems, that offer greater energy density and other advancements. This technology has opened up new uses for the devices across a wide range of industries, including some that operate in extreme environments.

Based on MIT research, FastCAP’s ultracapacitors store up to 10 times the energy and achieve 10 times the power density of commercial counterparts. They’re also the only commercial ultracapacitors capable of withstanding temperatures reaching as high as 300 degrees Celsius and as low as minus 110 C, allowing them to endure conditions found in drilling wells and outer space. Most recently, the company developed a AA-battery-sized ultracapacitor with the perks of its bigger models, so clients can put the devices in places where ultracapacitors couldn’t fit before.

Founded in 2008, FastCAP has already taken its technology to the oil and gas industry, and now has its sights set on aerospace and defense and, ultimately, electric, hybrid, and even fuel-cell vehicles. “In our long-term product market, we hope that we can make an impact on transportation, for increased energy efficiency,” says co-founder John Cooley PhD ’11, who is now president and chief technology officer of FastCAP.

FastCAP’s co-founders and technology co-inventors are MIT alumnus Riccardo Signorelli PhD ’09 and Joel Schindall, the Bernard Gordon Professor of the Practice in the Department of Electrical Engineering and Computer Science.

A “hairbrush” of carbon nanotubes

Ultracapacitors use electric fields to move ions to and from the surfaces of positive and negative electrode plates, which are usually coated with a porous material called activated carbon. Ions cling to the electrodes and let go quickly, allowing for quick cycling, but the small surface area limits the number of ions that cling, restricting energy storage. Traditional ultracapacitors can, for instance, hold about 5 percent of the energy that lithium ion batteries of the same size can.

In the late 2000s, the FastCAP founding team had a breakthrough: They discovered that a tightly packed array of carbon nanotubes vertically aligned on the electrode provided much more surface area. The array was also uniform, whereas the porous material was irregular and difficult for ions to move in and out of. “A way to look at it is the industry standard looks like nanoscopic sponge, and the vertically aligned nanotube arrays look like a nanoscopic hairbrush” that provides the ions more efficient access to the electrode surface, Cooley says.

With funding from the Ford-MIT Alliance and MIT Energy Initiative, the researchers built a fingernail-sized prototype that stored twice the energy and delivered seven to 15 times more power than traditional ultracapacitors.

In 2008, the three researchers launched FastCAP, and Cooley and Signorelli brought the business idea to Course 15.366 (Energy Ventures), where they designed a three-step approach to a market. The idea was to first focus on building a product for an early market: oil and gas. Once they gained momentum, they’d focus on two additional markets, which turned out to be aerospace and defense, and then automotive and stationary storage, such as server farms and grids. “One of the paradigms of Energy Ventures was that steppingstone approach that helped the company succeed,” Cooley says.

FastCAP then earned a finalist spot in the 2009 MIT Clean Energy Prize (CEP), which came with some additional perks. “The value there was in the diligence effort we did on the business plan, and in the marketing effect that it had on the company,” Cooley says.

Based on their CEP business plan, that year FastCAP won a $5 million U.S. Department of Energy (DOE) Advanced Research Projects Agency-Energy grant to design ultracapacitors for its target markets in automotive and stationary storage. FastCAP also earned a 2012 DOE Geothermal Technologies Program grant to develop very high-temperature energy storage for geothermal well drilling, where temperatures far exceed what available energy-storage devices can tolerate. Still under development, these ultracapacitors have proven to perform from minus 5 C to over 250 C.

From underground to outer space

Over the years, FastCAP made several innovations that have helped the ultracapacitors survive in the harsh conditions. In 2012, FastCAP designed its first-generation product, for the oil and gas market: a high-temperature ultracapacitor that could withstand temperatures of 150 C and posed no risk of explosion when crushed or damaged. “That was an interesting market for us, because it’s a very harsh environment with [tough] engineering challenges, but it was a high-margin, low-volume first-entry market,” Cooley says. “We learned a lot there.”

In 2014, FastCAP deployed its first commercial product. The Ulysses Power System is an ultracapacitor-powered telemetry device, a long antenna-like system that communicates with drilling equipment. This replaces the battery-powered systems that are volatile and less efficient. It also amplifies the device’s signal strength by 10 times, meaning it can be sent thousands of feet underground and through subsurface formations that were never thought penetrable in this way before.

In May 2016, FastCAP continued its relationship with NASA to design an ultracapacitor-powered module for components on planetary balloons, which float to the edge of Earth’s atmosphere to observe comets. The company is also developing an ultracapacitor-based energy-storage system to increase the performance of the miniature satellites known as CubeSats. There are other aerospace applications too, Cooley says: “There are actuators systems for stage separation devices in launch vehicles, and other things in satellites and spacecraft systems, where onboard systems require high power and the usual power source can’t handle that.”

A longtime goal has been to bring ultracapacitors to electric and hybrid vehicles, providing high-power capabilities for stop-start and engine starting, torque assist, and longer battery life. In March, FastCAP penned a deal with electric-vehicle manufacturer Mullen Technologies. The idea is to use the ultracapacitors to augment the batteries in the drivetrain, drastically improving the range and performance of the vehicles. Based on their wide temperature capabilities, FastCAP’s ultracapacitors could be placed under the hood, or in various places in the vehicle’s frame, where they were never located before and could last longer than traditional ultracapacitors.

The devices could also be an enabling component in fuel-cell vehicles, which convert chemical energy from hydrogen gas into electricity that is then stored in a battery. These zero-emissions vehicles have difficulty handling surges of power — and that’s where FastCAP’s ultracapacitors can come in, Cooley says.

“The ultracapacitors can sort of take ownership of the power and variations of power demanded by the load that the fuel cell is not good at handling,” Cooley says. “People can get the range they want for a fuel-cell vehicle that they’re anxious about with battery-powered electric vehicles. So there are a lot of good things we are enabling by providing the right ultracapacitor technology to the right application.”