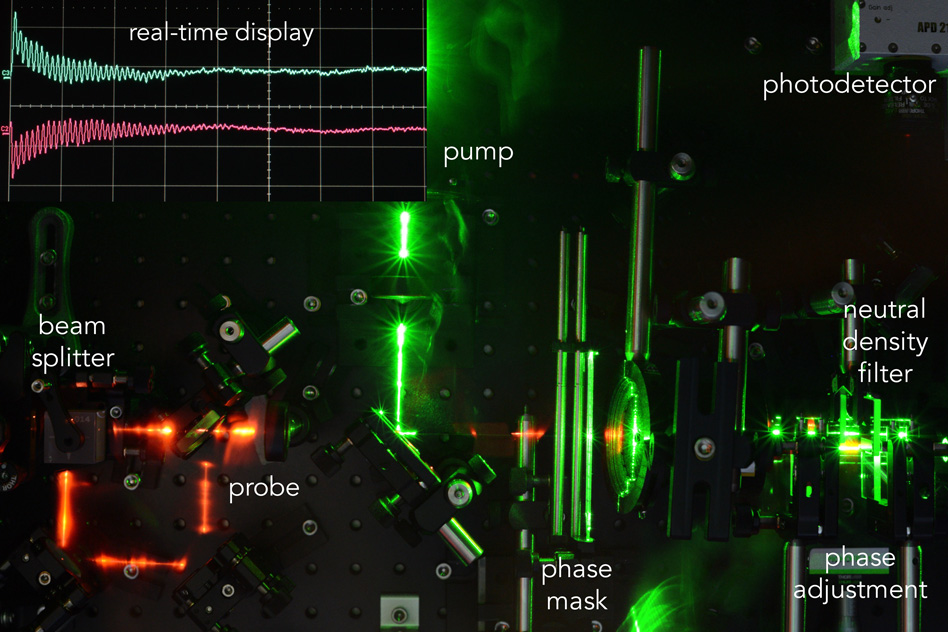 “Our whole goal was to monitor how materials evolve when exposed to radiation,” associate professor Michael Short explains, “but do it in a way that’s online,” without requiring samples to be extracted from that environment and tested in outside devices. Courtesy of the researchers

A new advance on a method developed by MIT researchers could enable continuous, high-precision monitoring of materials exposed to a high-radiation environment. The method may allow these materials to remain in place much longer, eliminating the need for preventive replacement. It could also speed up the search for new, improved materials for these harsh environments.

The new findings appear in the journal Applied Physics Letters, in a paper by graduate student Cody Dennett and assistant professor of nuclear science and engineering Michael Short. This study builds on the team’s earlier work that described the benchmarking of the method, called transient grating spectroscopy (TGS), for nuclear materials. The new research shows that the technique can indeed perform with the high degree of sensitivity and time-resolution that the earlier calculations and tests had suggested should be possible for detecting tiny imperfections.

“Our whole goal was to monitor how materials evolve when exposed to radiation,” Short explains, “but do it in a way that’s online,” without requiring samples to be extracted from that environment and tested in outside devices. Such a process can be time-consuming and expensive, and doesn’t provide information about how damage occurs over time.

The new testing approach can reveal changes in, for example, thermal and mechanical properties that affect the material’s response to temperature surges or vibration. “What we’re working toward is a real-time diagnostic system that works under radiation conditions,” Short says.

Their earlier work, he says, showed that the technique was capable of detecting such radiation-induced changes. The new work, which included making some modifications to the method, makes it possible to take measurements at high speed under real-time, dynamic conditions, and to produce the kind of detailed information needed for a practical monitoring system.

The method works without requiring any physical contact between the monitoring device and the metal surfaces being monitored. Instead, it relies purely on optical probes, which use one set of laser beams to stimulate vibrations in the surface, and others to probe the properties of those vibrations by using the interference patterns of the beams, which can reveal details not just of the surface properties but of the bulk material, as well.

The technique could also have broad applications in monitoring other kinds of materials, the researchers say. For example, it could be used to monitor the behavior of phase-change materials that are being developed for new kinds of magnetic data storage. “The ability to do characterization of dynamically changing systems is of interest to a wider materials processing community,” Dennett says. Since the team published details of the initial work, researchers around the world have contacted the researchers with requests for help with applying the technique to different kinds of materials and environments.

“We have particular applications in mind for our next steps,” Dennett says, “but the relative ease of implementation should make it interesting to a wide range of materials scientists.”

Compared to existing methods of studying these radiation-induced materials’ changes, which involve using multiple samples exposed over long periods of time before testing, Short says, this technique can provide “more data from one sample, in one experiment, in about 1 percent of the time.”

That ability to do rapid testing could be a significant boon for those attempting to develop new materials for new generations of nuclear reactors, Dennett says. Now, such development is a slow and painstaking process, because even tiny changes in the relative percentages of different alloying metals can dramatically affect the material’s properties. The new technique’s ability to provide rapid, real-time answers could open up much broader possibilities for developing and refining new options.

“There are a lot of groups working on more radiation-resistant alloys,” Short says, “but it’s a long process. Instead, this allows you to make a lot of variations and test them as you go.” This method could allow these researchers to come up with significant characterization data on new materials “in weeks instead of years,” he says.

The research was supported by the National Science Foundation, the U.S. Department of Energy’s National Nuclear Security Administration, and the MIT-Singapore University of Technology and Design International Design Center.