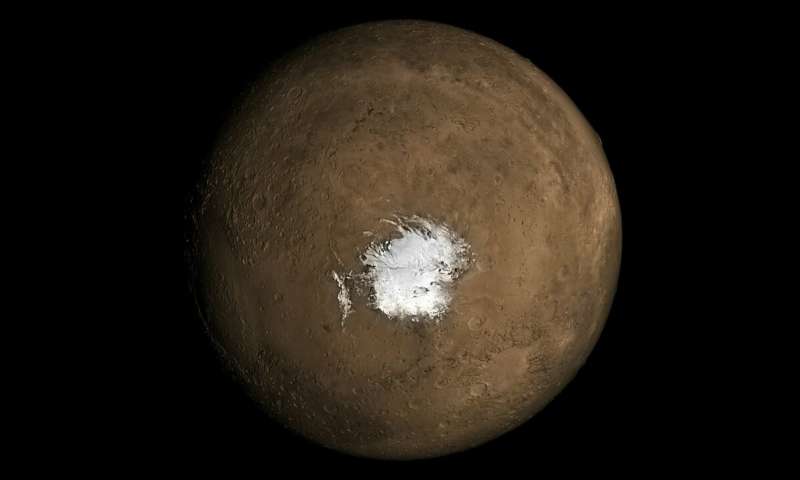 The Martian South Pole. A new study in Geophysical Research Letters argues there needs to be an underground source of heat for liquid water to exist underneath the polar ice cap. Credit: NASA.

A study published last year in the journal Science suggested liquid water is present beneath the south polar ice cap of Mars. Now, a new study in the AGU journal Geophysical Research Letters argues there needs to be an underground source of heat for liquid water to exist underneath the polar ice cap.

“Different people may go different ways with this, and we’re really interested to see how the community reacts to it,” said Michael Sori, an associate staff scientist in the Lunar and Planetary Laboratory at the University of Arizona and a co-lead author of the new paper.

The potential presence of recent underground magmatic activity on Mars lends weight to the idea that Mars is an active planet, geologically speaking. That fact could give scientists a better understanding of how planets evolve over time.

The new study is intended to further the debate around the possibility of liquid water on Mars. The presence of liquid water on the Red Planet has implications for potentially finding life outside of Earth and could also serve as a resource for future human exploration of our neighboring planet.

“We think that if there is any life, it likely has to be protected in the subsurface from the radiation,” said Ali Bramson, a postdoctoral research associate at the Lunar and Planetary Laboratory at the University of Arizona and a co-lead author of the new paper. “If there are still magmatic processes active today, maybe they were more common in the recent past, and could supply more widespread basal melting. This could provide a more favorable environment for liquid water and thus, perhaps, life.”

Mars has two giant ice sheets at its poles, both a couple of kilometers thick. On Earth, it is common for liquid water to be present underneath thick ice sheets, with the planet’s heat causing the ice to melt where it meets the Earth’s crust.

In a paper published last year in Science, scientists said they detected a similar phenomenon on Mars. They claimed radar observations detected evidence of liquid water at the base of Mars’s south polar ice cap. However, the Science study did not address how the liquid water could have gotten there.

Mars is much cooler than Earth so it was unclear what type of environment would be needed to melt the ice at the base of the ice cap. Although previous research has examined if liquid water could exist at the base of Mars’s ice caps, no one had yet looked at the specific location where the Science study claimed to have detected water.

Looking for the heat

The new study’s authors first assumed the detection of liquid water underneath the ice cap was correct and then worked to figure out what parameters were needed for the water to exist. They performed physical modeling of Mars to understand how much heat is coming out of the interior of the planet and if there could be enough salt at the base of the ice cap to melt the ice. Salt lowers the melting point of ice significantly so it was thought that salt could have led to melting at the base of the ice cap.

The model showed salt alone would not raise the temperature high enough to melt the ice. Instead, the authors propose there needs to be additional heat coming from Mars’s interior.

One plausible heat source would be volcanic activity in the planet’s subsurface. The study’s authors argue that magma from the deep interior of Mars rose towards the planet’s surface about 300,000 years ago. It did not break the surface, like a volcanic eruption, but pooled in a magma chamber below the surface. As the magma chamber cooled, it released heat that melted the ice at the base of the ice sheet. The magma chamber is still providing heat to the ice sheet to generate liquid water today.

The new study, however, proposes that there could have been more recent underground volcanic activity. And, if there was volcanic activity happening hundreds of thousands of years ago, there’s a possibility it could be happening today, according to the study’s authors.

“This would imply that there is still active magma chamber formation going on in the interior of Mars today and it is not just a cold, sort of dead place, internally,” Bramson said.

Jack Holt, a professor at the at the Lunar and Planetary Laboratory at the University of Arizona, said the question of how water could exist underneath the south polar ice cap immediately came to his mind after the Science paper was published, and the new paper adds an important constraint on the possibility of water being there. He said it will likely add to the debate in the planetary science community about the finding and point out that more research needs to be done to evaluate it.

“I think it was a great idea to do this type of modeling and analysis because you have to explain the water, if it’s there, and so it’s really a critical piece of the puzzle,” said Holt, who was not involved in the new research but did talk to the study’s authors before they submitted the paper. “The original paper just left it hanging. There could be water there, but you have to explain it, and these guys did a really nice job of saying what is required and that salt is not sufficient.”