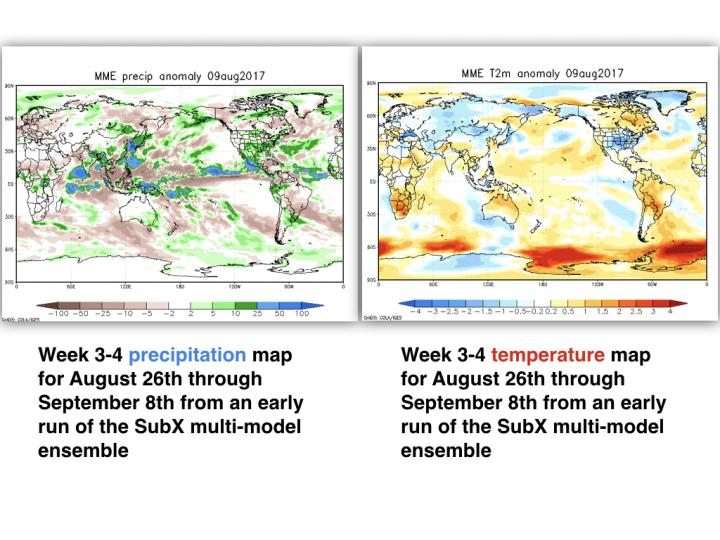 These are side-by-side precipitation and temperature maps for August 26th through September 8 from an early run of the SubX multi-model ensemble. Source: SubX, NOAA Climate Prediction Center

Predicting the weather three to four weeks in advance is extremely challenging, yet many critical decisions affecting communities and economies must be made using this lead time. However, model forecasts available for the first time this week could help NOAA’s operational Climate Prediction Center (CPC) significantly improve its week 3-4 temperature and precipitation outlooks for the U.S.

The Subseasonal Experiment (SubX) is a two year project, led by University of Miami (UM) Rosenstiel School of Marine and Atmospheric Science atmospheric scientist Ben Kirtman, that combines multiple global models from NOAA, NASA, Environment Canada, the Navy, and National Center for Atmospheric Research to produce once-a-week real-time experimental forecasts as well as a set of forecasts for past dates, called reforecasts, now available to both CPC and the research community.

“The multi-model reforecasts perfectly dovetail with the real-time forecasts so that you can perform a robust calibration and skill assessment,” said Ben Kirtman, lead of the SubX project team and University of Miami Rosenstiel School atmospheric scientist. “The research you do can immediately translate into potential improvements of an operational product, and that’s really exciting.”

The SubX reforecasts are being produced for 1999-2015, providing a robust dataset that CPC forecasters can compare to known conditions from that time to adjust the real-time SubX forecasts and improve the week 3-4 outlooks. The one-year real-time predictions provide CPC with additional models to experimentally guide the week 3-4 outlooks, which previously used only 1-3 models. In addition, the external community is able to access the data for research to better model sources of predictability that underpin NOAA’s ability to produce skillful predictions in this timescale.

SubX is a project under the NOAA Climate Test Bed, which helps expedite the transition of research to NOAA’s operational modeling centers that actually produce the forecasts given to the public. The SubX team’s goal is to combine global models, which each have different strengths and weaknesses, and test the benefit of each model and the multi-model approach for week 3-4 outlooks.

“Ultimately, you can think of our project as trying to figure out how to pull the best properties of all kinds of different tools to ultimately make better models and forecasts,” said Kirtman. “In addition to testing the benefit of combining the models into one forecast, the skill of the individual models will be evaluated against one another.”

Kirtman describes improving prediction on the week 3-4 timescale as a “new frontier.” Past efforts have focused on short-term weather forecasts and seasonal outlooks, but new research showing potential predictability for this time scale, as well as public demand, has focused attention on this problem. Advances in this area could substantially help NOAA better prepare decision makers and managers for hazards like heat waves, cold spells, and heavy rain.

NOAA’s forecasters at CPC have already begun experimentally using SubX’s multi-model reforecasts and real-time forecasts, and the potential benefits are clear. “The fact that SubX is providing us additional models to look at gives us a good chance of observing things in the models that may not have appeared in the smaller group of models or a single model,” said Dan Collins, researcher and forecaster at CPC. “This [dataset] also provides a better capability to really examine these models in an equal comparison and understand where they are skillful and where they are not.”

Rigorous evaluation of forecast skill over the next year will allow CPC to determine whether the SubX system, or any of its individual models, should become operational.

The SubX project is supported by NOAA’s OAR Modeling, Analysis, Predictions, and Projections Program, and a partnership including NWS/STI, Navy and NASA. SubX dataset is accessible to the external community through a public archive at Columbia University’s International Research Institute for Climate and Society (IRI) Data Library: http://iridl.ldeo.columbia.edu/SOURCES/.Models/.SubX/