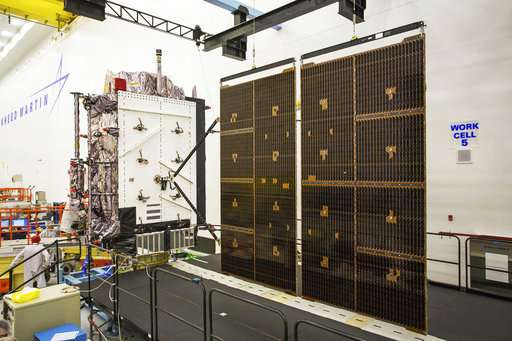 The next wave of GPS satellites will soon be launched into orbit.

A new highly accurate GPS system, developed by the U.S. Air Force, is set to lift off on Dec. 18 aboard a SpaceX Falcon 9 rocket from Cape Canaveral, Florida. The launch is the first of 32 scheduled GPS III satellites built by Lockheed Martin that will replace the older ones currently in orbit.

The new GPS systems will have a stronger military signal that is ultimately harder to jam than the current fleet of satellites. This improvement was necessary after Russia was accused of jamming Norway’s satellite signals during a NATO military exercise in October 2018.

The new system will also eventually  provide an entirely new civilian signal compatible with other countries’ navigation satellites like the European Union’s Galileo system, enabling civilian receivers capable of receiving the new signal to have more satellites to lock in on, ultimately increasing the accuracy of location information about three times as much as the current satellites. “If your phone is looking for satellites, the more it can see, the more it can know where it is,” Chip Eschenfelder, a Lockheed Martin spokesman, said in a statement.

However, Cristina Chaplain, who tracks GPS and other programs for the Government Accountability Office (GAO), said only certain features of the stronger, jamming-resistant military signal will be available until a new and complex ground control system is available. Current estimates have the ground control system being fully functional in either 2022 or 2023.

The civilian frequency also will not be available until the new control system is operational.

Due to problems in delivering key components, retesting other components and the Air Force’s decision to use for the first time the SpaceX Falcon 9 rocket, the first GPS III satellite was delayed 2.5 years.

The new ground control system OCX, which is being developed by Raytheon, is currently four years behind schedule, largely due to the U.S. Department of Defense’s inability to meet cybersecurity standards. The system also comes with a $5.2 billion price tag, $2.5 billion more than the original cost.

The second GPS III satellite has also been completed and is ready to be transported to Cape Canaveral for a summer 2019 launch, and six other satellites are currently under construction.