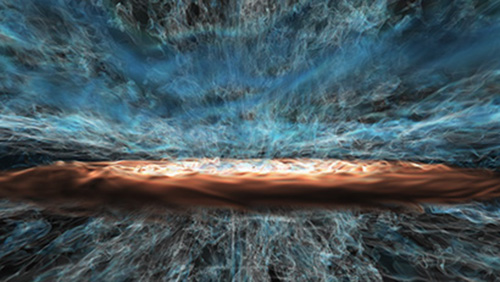 A $1.547 million grant from the National Science Foundation will fund a powerful new supercomputer for UC Santa Cruz researchers in fields ranging from astrophysics to climate science.

Principal investigator Brant Robertson, an associate professor of astronomy and astrophysics, said he hopes to have the new high-performance computer system up and running by the end of the calendar year.

“It will provide a dramatic increase in the computational power available to the campus, and it will serve a wide range of scientists throughout the division,” Robertson said. “We’ll be able to do bigger and faster simulations and more realistic modeling of physical processes.”

Computational studies have become an essential part of research in many fields. UC Santa Cruz has an especially large and accomplished group of computational astrophysicists who use supercomputers to explore fundamental questions about galaxy formation, dark matter, gravitational wave sources, supernovae, exoplanet atmospheres, and other astrophysical phenomena.

“You can’t put a galaxy in a lab or do experiments with black holes because the masses and energies are beyond anything on Earth, so we try to model them through simulations and see how the results compare to observations,” Robertson explained. “It’s like experimentation in other fields. We do controlled calculations that are predictive in order to test what physics are important for the astronomical objects we’re studying.”

UC Santa Cruz has established an international reputation as a leading institution for theoretical astrophysics, and the campus’s supercomputing facilities have played a key role in that success. This large grant from NSF’s highly competitive Major Research Instrumentation program recognizes and supports the campus’s continued excellence in this area, Robertson said.

“In addition to the tremendous opportunities in astrophysics, the new computational system will support state-of-the-art simulations of planets and their atmospheres closer to home. We’ll be able to better understand fundamental problems in planetary and atmospheric sciences, to interpret space-borne observations of our solar system, and to probe how circulations and clouds respond to, and in turn influence, future climate change on Earth,” said Feldl, who is a co-principal investigator of the NSF grant.

Other co-PIs include Enrico Ramirez-Ruiz and Piero Madau, both professors of astronomy and astrophysics, and Nicholas Brummell, professor of applied mathematics. In all, about 20 senior faculty members contributed to the proposal for the grant, illustrating the expanding role of computational science at UC Santa Cruz. In addition to astrophysics and climate science, the new supercomputer system will be used for research in materials science, chemistry, applied mathematics, and computer science.

The new facility will also serve as a training platform for undergraduates, graduate students, and postdoctoral researchers. The new system will replace the aging Hyades supercomputer, which now has more than 300 registered users and has been a workhorse since it began operating in 2013.

“Hyades has been a good resource for many years, but it’s straining under the load, so it’s great to have this opportunity to modernize our computing facilities,” Robertson said.