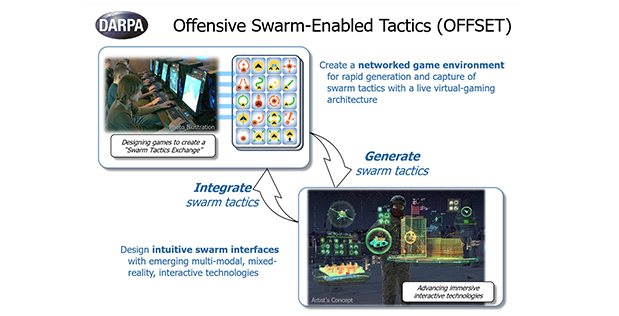 Urban canyons—with their high vertical structures, tight spaces, and limited lines of sight—constrain military communications, mobility, and tactics in the best of times. These challenges become even more daunting when U.S. forces are in areas they do not control—where they can’t rely on supply chains, infrastructure, and previous knowledge of local conditions and potential threats.

Unmanned air vehicles (UAVs) and unmanned ground vehicles (UGVs) have long proven beneficial in such difficult urban environs, performing missions such as aerial reconnaissance and building clearance. But their value to ground troops could be vastly amplified if troops could control scores or even hundreds—“swarms”—of these robotic units at the same time. The prime bottleneck to achieving this goal is not the robotic vehicles themselves, which are becoming increasingly capable and affordable. Rather, U.S. military forces currently lack the technologies to manage and interact with such swarms and the means to quickly develop and share swarm tactics suitable for application in diverse, evolving urban situations.

To help overcome these challenges and dramatically increase the effectiveness of small-unit combat forces operating in urban environments, DARPA has launched its new OFFensive Swarm-Enabled Tactics (OFFSET) program. OFFSET seeks to develop and demonstrate 100+ operationally relevant swarm tactics that could be used by groups of unmanned air and/or ground systems numbering more than 100 robots. These swarm tactics for large teams of unmanned assets would help improve force protection, firepower, precision effects, and intelligence, surveillance, and reconnaissance (ISR) capabilities. OFFSET plans to offer frequent opportunities for engagement with anticipated end users in the U.S. Army and U.S. Marine Corps and would share successfully tested swarm tactics with them on a rolling basis.

“With the technologies and tactics to be developed under OFFSET, we anticipate achieving a deeper understanding of how large numbers of increasingly autonomous air and ground robots can be leveraged to benefit urban warfighters,” said Timothy Chung, DARPA program manager. “We aim to provide the tools to quickly generate swarm tactics, evaluate those swarm tactics for effectiveness, and integrate the best swarm tactics into field operations. If we’re successful, this work could also bring entirely new scalable, dynamic capabilities to the battlefield, such as distributed perception, robust and resilient communications, dispersed computing and analytics, and adaptive collective behaviors.”

To accomplish these goals, OFFSET seeks to develop an active swarm tactics development ecosystem and supporting open systems architecture, including:

OFFSET aims to demonstrate its technologies through frequent live experiments with various unmanned air and ground platforms. Every six months, operational vignettes of progressively increasing complexity would challenge both the swarm architecture and the developed swarm tactics across numerous technological and operational test variables, such as swarm size, proportion of air and ground platforms, and mission duration. Users would employ the swarm interface to test the best of the virtual tactics in the real world, and interactively supply their unmanned platforms with near-real-time tactics updates using automated deployment technologies.

“We’re interested in developing practical swarm systems in an agile way, so future operators will have the tools they need to outsmart and outperform urban adversaries,” Chung said.