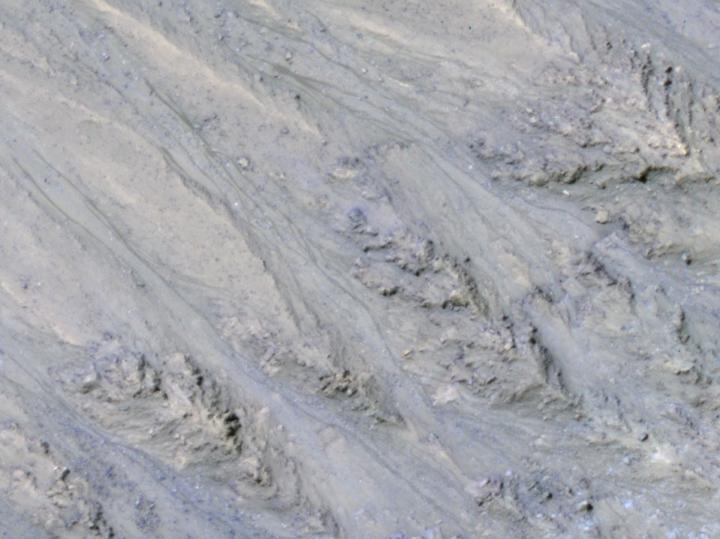 This HiRISE image cutout shows Recurring Slope Lineae in Tivat crater on Mars in enhanced color. The narrow, dark flows descend downhill (towards the upper left). Analysis shows that the flows all end at approximately the same slope, which is similar to the angle of repose for sand.

Dark features previously proposed as evidence for significant liquid water flowing on Mars have now been identified as granular flows, where sand and dust move rather than liquid water, according to a new article published in Nature Geoscience by the U.S. Geological Survey.

These new findings indicate that present-day Mars may not have a significant volume of liquid water. The water-restricted conditions that exist on Mars would make it difficult for Earth-like life to exist near the surface of the planet.

Scientists from the USGS, the University of Arizona, Durham University (England) and the Planetary Science Institute analyzed narrow, down-slope trending surface features on Mars that are darker than their surroundings, called Recurring Slope Lineae, or RSL. These RSL features grow incrementally, fade when inactive and recur annually during the warmest time of year on Mars. RSL are mostly found on steep rocky slopes in dark regions of Mars, such as the southern mid-latitudes, Valles Marineris near the equator, and in Acidalia Planitia on the northern plains. The appearance and growth of these features resemble seeping liquid water, but how they form remains unclear, and this research demonstrated that the RSL flows seen by HiRISE are likely moving granular material like sand and dust.

“We’ve thought of RSL as possible liquid water flows, but the slopes are more like what we expect for dry sand,” said USGS scientist and lead author Colin Dundas. “This new understanding of RSL supports other evidence that shows that Mars today is very dry.”

The terminal end of the RSL slopes, said Dundas, are identical to the slopes of sand dunes where movement is caused by dry granular flows. Water almost certainly is not responsible for this behavior, which would require the volume of liquid to correspond to the length of slope available, producing more liquid on longer slopes. Instead, the 151 RSL examined by the study authors all end on similar slopes despite very different lengths. Additionally, said the scientists, water is unlikely to be produced only near the tops of slopes at these angles and if it were, it should be able to flow onto lower slopes.

This new research finds that these RSL features are flows of granular material and thus, align with the long-standing hypothesis that the surface of Mars lacks flowing water. Small amounts of water could still be involved in their initiation in some fashion, as hydrated minerals have been detected at some RSL locations. The authors conclude that liquid on present-day Mars may be limited to traces of dissolved moisture from the atmosphere and thin films of water.