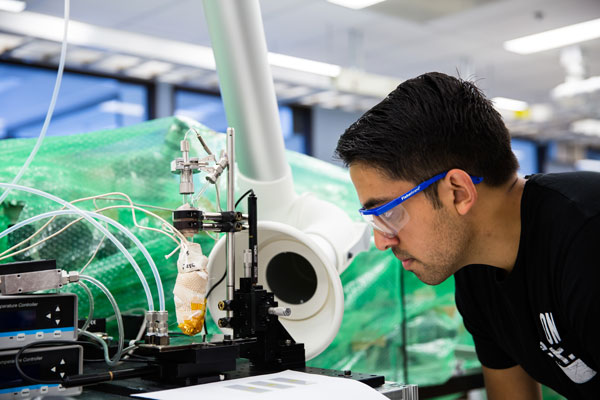 Additive manufacturing is predicted to revolutionize a number of industries, but the healthcare field could benefit the most from this technology.

A recent prototype developed by researchers at the University of Michigan may provide an avenue for drug companies to develop innovative therapeutics.

The research team has discovered a way to create “printable medication”—pure, ultra-precise doses of drugs onto a wide variety of surfaces. Some of the applications that may emerge from this endeavor could include pharmacies being able to generate custom-dosed medications for customers within a certain time period.

The technology at the center of this endeavor relies on a process called organic vapor-jet printing, which entails printing active ingredients of a certain compound directly onto surfaces without the need for solvents or “fillers” compared to conventional ink-jet or 3D printing techniques.

R&D Magazine interviewed Max Shtein, lead study author and professor of materials science and engineering at the University of Michigan, who discussed the genesis of this idea as well as elaborated on other beneficial applications that could emerge from this experiment.

R&D Magazine: Where did the idea for this experiment come from?

Shtein: For many years we have been developing a printing technology for manufacturing OLEDs and other organic electronic devices. It was relatively recently that we – somewhat accidentally – discovered that this technology could be adapted to print film-form medicines with improved properties, such as faster dissolution. We continued working along this path, did much reading, and had many conversations with experts in pharmaceutical science and technology. All this made us aware of several additional challenges in pharmaceuticals research, manufacturing, dosing, etc., that could be resolved seemingly simultaneously through this printing approach.

R&D Magazine: Why did you choose organic vapor-jet printing versus traditional 3D printing methods? What is different about this technology compared to other methods for manufacturing new drugs?

Shtein: Unlike conventional ink-jet or 3D printing, there are no solvents or “fillers” involved in the printing process – we print the active ingredients directly onto surfaces. Through tight control over process settings, vapor-jet printing can also print a very fine crystalline structure with a large specific surface area, enabling these printed medications to dissolve more easily in water. All this is accomplished without any pre- or post-processing (e.g. dissolution of active ingredient, drying of the finished film, etc.). This potentially takes many variables out of a manufacturing process.”

Shtein: We first heat the material (e.g. the medicine’s active ingredient, like ibuprofen or tamoxifen) until it starts to evaporate. We then use a gas (e.g. nitrogen) to pick up the vapor and jet it onto a surface, where the vapor condenses and forms a film. The printing can be done virtually any surface.”

R&D Magazine: Walk me through the experiment. What were the steps and what did you learn?

Shtein: My graduate student at the time, Olga Shalev, is the lead author on the published study, having done the bulk of the experiments herself and in collaboration with others from the University of Michigan. We had three major goals: a) show that several common active pharmaceutical ingredients can be printed in a very controlled way on different surfaces, b) show that the printed films could dissolve in a very precisely controlled manner (including at a faster rate), and c) show that vapor-jet printed cancer drugs would actually kill cancer cells. The study, published in Nature Communications, explains the experiment.

Briefly, Olga printed the films onto bandages, dissolvable tabs, microneedles, glass, etc. The films were characterized with the help of Prof. Clarke’s and Prof. Anna Schwendeman’s groups in a number of ways to make sure we understood their micro- and nano-scale structure, to ensure that their molecular structure was preserved, etc. With the advice from Prof. Greg Amidon’s group, Olga then printed a number of samples that were carefully dissolved, while precisely measuring the dissolution speed.

Finally, she printed some of the compounds that were put into petri dishes with cancer cells, which were studied in Prof. Mehta’s lab to see whether they would be effective at killing the cancer cells in a culture. Tamoxifen happens to be a drug often used to treat cancer and is poorly soluble in aqueous media, so it was a good choice for demonstrating these goals, along with several other materials we studied. After doing many carefully controlled experiments, we observed that, for example, printed films of tamoxifen dissolved very quickly and directly in the water-based cell cultures, resulting in the cancer cells getting killed off substantially faster than if one were to sprinkle the drug into the petri dish, and comparably to drug pre-dissolved in DMSO. (DMSO is a solvent that is sometimes used to solubilize challenging ingredients for petri dish studies, but is toxic to humans.) All this happens to be a rather big deal, because, among other things, it demonstrates a whole new level of dosing precision, compatibility with different drug delivery methods, and shows enhanced bioavailability without the need for strong solvents.

R&D Magazine: Are there any specifications that need to be made when the administered through a dissolvable strip, microneedle patch, or other dosing device?

Shtein: The amount of drug to be delivered needs to be known. This might not be the best technique at this time for delivering very large amounts, but there are many high potency medicines that need very precise, small amounts for which the technique is perfect. The active ingredient needs to withstand the evaporation process, which 90 percent of active ingredients in medicines today can do. If the dissolvable strip is administered orally, one needs to consider taste masking, in case the active ingredient has bad flavor. This can be resolved, for example, by printing onto appropriate surfaces (e.g. flavored gels, etc.). Similarly, advanced biochemical diagnostics often require smaller, but precisely personalized amounts of chemicals, which this technology can deliver.

R&D Magazine: Why would this technology be useful for the pharmaceutical industry when it comes to drug development?

Shtein: For one, many Pharma companies deal with poor solubility of their drugs on a daily basis. This technology helps resolve the dissolution bottleneck for many of them. Likewise, being able to print in a controlled way many different compounds onto an arbitrarily small (or large) area potentially opens the door to novel combination therapies, as well as novel theranostic devices.

R&D Magazine: What are the next steps in the development process for this technology?

Shtein: We are interested in collaborating with biomedical and pharmaceutical experts on treating conditions that are difficult to treat using current drug delivery methods, as well as developing printing solutions for biomed and pharma R&D, manufacturing.