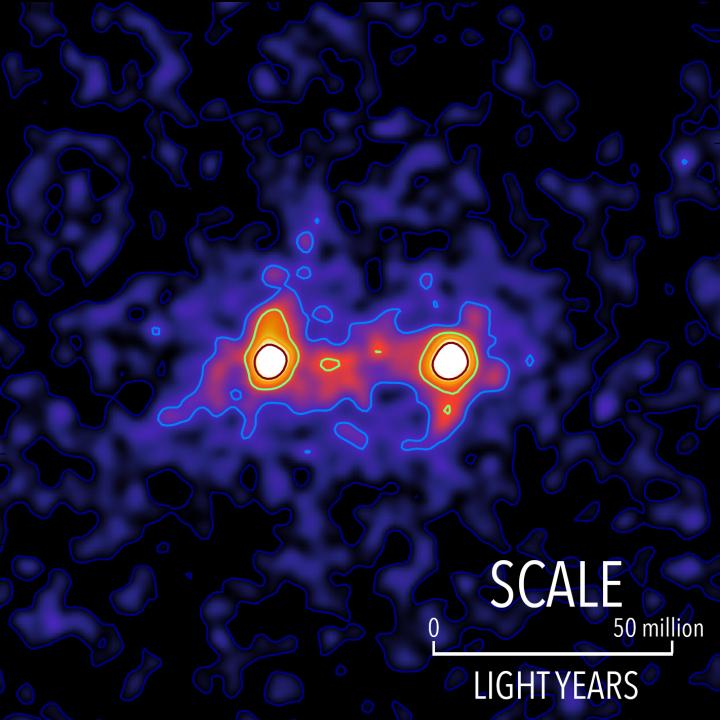 Dark matter filaments (shown in red) bridge the space between galaxies (shown in white) on this false color map. Credit: University of Waterloo

Researchers at the University of Waterloo have been able to capture the first composite image of a dark matter bridge that connects galaxies together.

The composite image, which combines a number of individual images, confirms predictions that galaxies across the universe are tied together through a cosmic web connected by dark matter that has until now remained unobservable.

Dark matter, a mysterious substance that comprises around 25 per cent of the universe, doesn’t shine, absorb or reflect light. It has traditionally been largely undetectable, except through gravity.

“For decades, researchers have been predicting the existence of dark-matter filaments between galaxies that act like a web-like superstructure connecting galaxies together,” said Mike Hudson, a professor of astronomy at the University of Waterloo. “This image moves us beyond predictions to something we can see and measure.”

As part of their research, Hudson and co-author Seth Epps, a former master’s student at the University of Waterloo, used a technique called weak gravitational lensing. It’s an effect that causes the images of distant galaxies to warp slightly under the influence of an unseen mass such as a planet, a black hole, or in this case, dark matter. The effect was measured in images from a multi-year sky survey at the Canada-France-Hawaii Telescope.

They combined lensing images from more than 23,000 galaxy pairs located 4.5 billion light-years away to create a composite image or map that shows the presence of dark matter between the two galaxies. Results show the dark matter filament bridge is strongest between systems less than 40 million light-years apart.

“By using this technique, we’re not only to able to see that these dark matter filaments in the universe exist, we’re able to see the extent to which these filaments connect galaxies together,” said Epps.

Hudson and Epps’ research appears in the Monthly Notices of the Royal Astronomical Society.