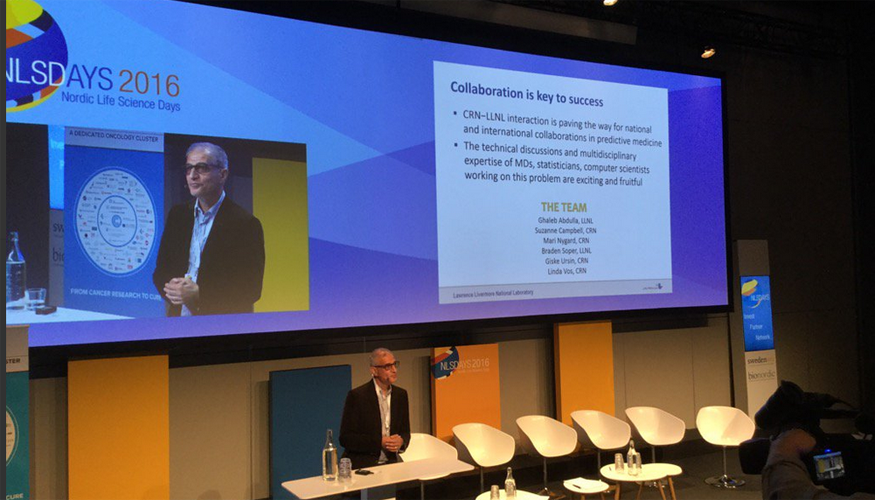 Laboratory computer scientists and Norwegian researchers are collaborating to apply high performance computing (HPC) to the analysis of medical data to improve screening for cervical cancer.

The convergence of high performance computing, big data and life science is enabling the development of personalized medicine, says Ghaleb Abdulla, Livermore lead on the collaboration with Norway and director of LLNL’sInstitute for Scientific Computing Research. “Delivering care tailored to the needs of the individual, rather than population averages, has the potential to transform the delivery of healthcare.”

Abdulla’s team is partnering with the Cancer Registry of Norway(link is external) “to advance precision medicine” by developing “individually tailored prevention and treatment strategies.” The partnership’s ultimate goal is “to improve the outcome of women affected by cervical and breast cancers.”

Norway provides equal access to health care to all citizens and maintains registries of health histories. As a result, Norway brings an invaluable resource to the collaboration, a national database for some 1.8 million ‘unique’ Norwegian women’s cervical cancer screening results covering 25 years (1991-2015). Aggressive screening programs against cancer, begun in 1995, are a key element of the Norwegian government’s cancer control effort.

“The cancer registry database is unique because it is not a sample, but includes almost all women in Norway,” Abdulla says, noting the data base contains such information as patient identification, birthdate, diagnosis date, test type, stage, lab number, region and censor date.

Initial efforts are focused on improving risk assessment and the resulting screening recommendations for individual women, he says. “We’re working to personalize screenings by combining pattern recognition, machine learning and time-series statistics to analysis of the data.”

Access to 10.7 million individual records for 1.8 million patients over 25 years gives researchers the opportunity to test and validate their models against historical data, Abdulla said.

The team is developing a flexible, extendable model that incorporates new data such as other biomolecular markers, genetics and lifestyle factors to individualize risk assessment, according to Abdulla. “We want to identify the optimal interval for screening each patient.”

Reliable assessment would allow women with increased risk of cervical cancer to receive more frequent screenings and those with less to receive fewer, improving health outcomes and making screening programs more cost effective, according to the project abstract. Medical researchers note that increasing the time between screenings for low risk women reduces the harm associated with false positive tests.

Other members of the Livermore team are Amy Gryshuk of Physical and Life Sciences and Braden Soper, a computer scientist in Global Security. The partnership also has strong institutional support from Jim Brase, Computation deputy associate director for Science and Technology; David Rakestraw, S Program manager in Global Security; and Jason Paragas, Global Security, the Computation Directorate and Livermore Computing.

The collaboration has received international attention, most recently when it was referenced by Vice President Joe Biden in a Sept. 19 speech to the United Nations’ Global Good Summit. Abdulla made successive presentations about the partnership, first to the Cancer Registry of Norway in Oslo, Sept. 13, and then the Nordic Life Sciences Days(link is external) conference in Stockholm, Sweden Sept. 14. On his return to the Lab, he presented Sept. 16 to a delegation of Norwegian members of parliament hosted by Bruce Warner, principal associate director for Global Security, at a meeting attended by Director Bill Goldstein.

Tthe seeds of the partnership were sown at a 2014 i-GATE(link is external) workshop in Livermore when representatives from the Norwegian government approached Abdulla after hearing a presentation he made on data analysis. Together they wrote a proposal in July 2014.

However, they had to address the absence of privacy and security protocols between the two countries for exchanging medical data, Abdulla says. Lab researchers were given access to the data in March of this year and early work shows promise.

Currently the partnership’s focus is on cervical cancer but the plan is to later include breast cancer as well, he says. “What we’re doing is an example of how you start small and grow the collaboration.”

“The work we’re doing now will open the door to other research opportunities,” Abdulla says. “I’m passionate about this project. This research is about saving lives.”