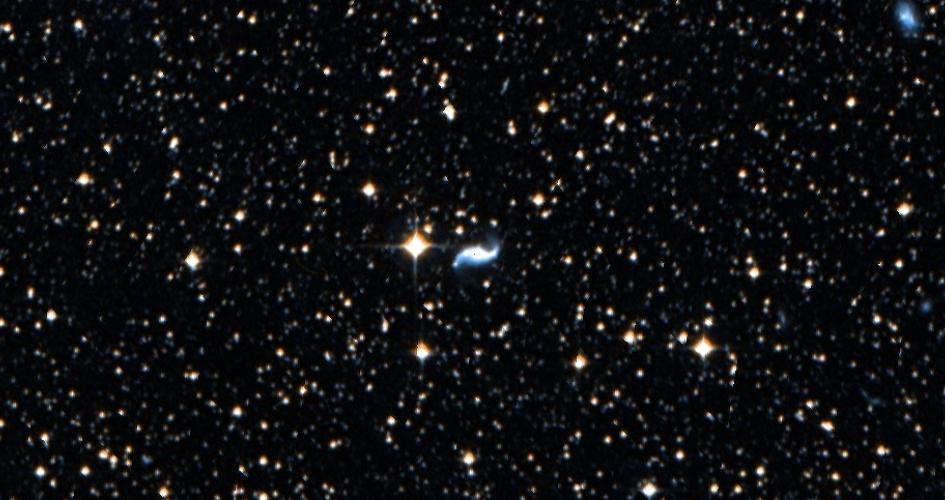 Caption: Scientists have detected the first X-rays from what appears to be a type Ia supernova, located inside the spiral-shaped galaxy ESO 336-G009, about 260 million light-years from Earth. Credit: Digital Sky Survey

X-rays from type Ia supernovae might clue scientists in on some of the lesser known features of exploding stars.

Researchers from the University of Chicago found small amounts of X-rays—33 photons in the first observation a year and a half after the supernova exploded, and ten in another about 200 days later—in Ia supernovas, which hasn’t previously been detected.

“This certainly appears to be a Ia supernova with substantial circumstellar material, and it looks as though it’s very dense,” said study co-author Vikram Dwarkadas, a research associate professor in the Department of Astronomy and Astrophysics at the University of Chicago, in a statement. “What we saw suggests a density about a million times higher what we thought was the maximum around Ia’s.”

Ia supernovas are created when a white dwarf star in a two-star system undergoes a thermonuclear explosion. These supernovas burn at a specific brightness, which is of particular interest to astronomers because it allows them to calculate how far away they are from Earth and ultimately map distances in the universe.

A few years ago scientists discovered type Ia supernovas with an optical signature that suggests they carry a very dense cloak of circumstellar material surrounding them. Dense material is primarily only seen from a different type of supernova called type II and is created when immense stars begin to lose mass.

Ejected mass collects around the star and then when the star collapses, the explosion sends a shockwave hurtling at supersonic speeds into the dense material, producing a shower of X-rays from the type II supernovas. However, X-rays have never been seen from type Ia supernovas.

“Although other type Ia’s with circumstellar material were thought to have similarly high densities based on their optical spectra, we have never before detected them with X-rays,” Dwarkadas said.

The researchers plan on conducting more studies to look for X-rays as well as radio waves, to better understand these supernovas.