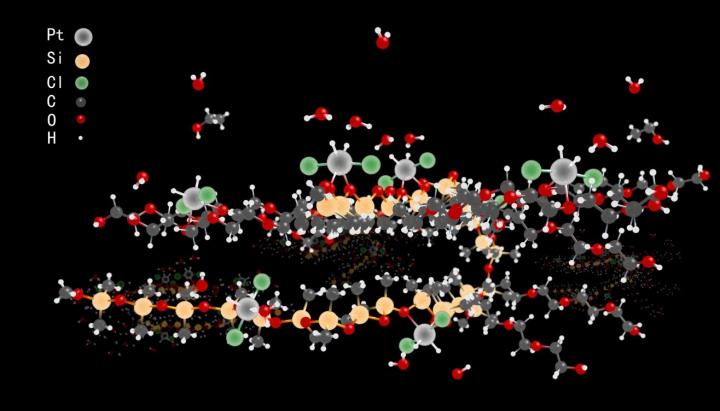 This is a schematic illustration of (R1OR2)2Pt(0)Cl2H2. Credit: DICP

Researchers at the Dalian Institute of Chemical Physics (DICP) of the Chinese Academy of Sciences and the University of Delaware have reported a way to produce a colorless liquid reservoir of metal-like discrete platinum atoms. Their findings were published in Nature Communications.

Platinum chloride salts are reduced by alcohols to single platinum metal atoms in an environmentally benign liquid surfactant. The individual Pt atoms are shielded by a mantle of hydrochlorides and docked in the liquid through abundant oxygen atoms. The preparation of the metal-like Pt atoms is scalable.

As a noble metal, metallic Pt nanoparticles on carbon or oxide supports are widely used in the petroleum refining and chemical industries due to their unique catalytic functions. “The reserve of Pt on earth is limited, and about 5.6 tons of Pt are consumed every year just in the silicone industry,” said Z. Conrad Zhang, who led the research.

The researchers tested the catalytic performance of the liquid laden with Pt atoms. “We found that the electron-deficient Pt atoms in the liquid exhibited super-high activity and high selectivity for the reaction compared to known Pt catalysts,” said LIU Kairui, a graduate student and lead author of the paper.

The docked discrete Pt atoms do not aggregate under reaction conditions – retaining high activity and staying colorless through repeated uses. “The high activity, selectivity and stability of this catalyst may dramatically reduce the amount of Pt consumed by the silicone industry and may be broadly applicable to other applications,” Zhang said.

Although the liquid laden with the Pt atoms is stable at 120°C and remains clear for over six months on the shelf at ambient temperature, the researchers found that it turned dark due to aggregation of the Pt atoms when exposed to X-ray or electron beams often employed to characterize the Pt atoms. To resolve this challenge, the researchers turned to 195Pt nuclear magnetic resonance (NMR) spectroscopy as the tool which was found to provide unambiguous evidences for the produced Pt atoms.

“The NMR spectroscopic data of the liquid not only unambiguously showed the discrete nature of mononuclear Pt atoms, but also revealed only one carbon monoxide coordinated to a Pt atom,” said Professor BAI Shi of the University of Delaware.

“We are expanding the depositories of various metal atoms in our current research. The successful synthesis of readily removable mantles of the Pt atoms in liquid phase may potentially enable atomically controllable fabrication of catalytic materials and metallic materials by design,” said Zhang.