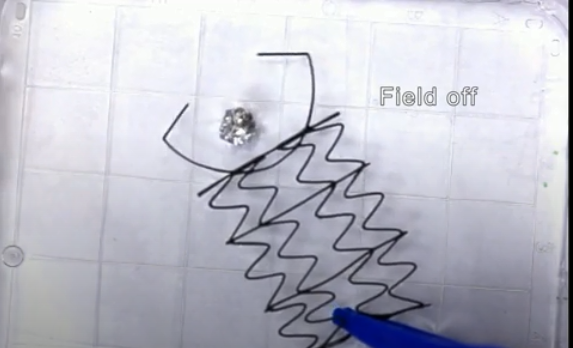 Researchers have taken the next step in developing soft mesh robots that can contract, reshape and grab small objects and carry water droplets while floating on water.

A North Carolina State University research team has found a way to 3D print soft, intelligent actuators that can be programmed to reshape and reconfigure under a magnetic field, which could prove useful in a number of applications, including soft robotics and biomedical devices.

To make this new material, the researchers first developed a new silicone microbead ink that is bound by liquid silicone and contained in water to form a homocomposite thixotropic paste that resembles toothpaste. It can be easily squeezed out of a tube, but maintains its shape without dripping.

They then used a 3D printer to shape the paste into mesh-like patterns that, after being cured in an oven, create flexible silicone structures that can be stretched and collapsed by the application of magnetic fields.

“The structures are also auxetic, which means that they can expand and contract in all directions,” Orlin Velev, the S. Frank and Doris Culberson Distinguished Professor of Chemical and Biomolecular Engineering at NC State and corresponding author of a paper describing the research, said in a statement. “With 3D printing, we can control the shape before and after the application of the magnetic field.”

The scientists also embedded into the material iron carbonyl particles—which features a high magnetization and are widely available—enabling a strong response to magnetic field gradients.

By 3D printing, the researchers can fabricate the soft architectures with different actuation modes like isotropic/anisotropic contraction and multiple shape changes, as well as functional reconfiguration.

Ultimately, meshes that reconfigure in magnetic fields and respond to external stimuli by reshaping could be useful as active tissue scaffolds for cell cultures and soft robotics that mimic creatures living on top of the surface of water.

“Mimicking live tissues in the body is another possible application for these structures,” Sangchul Roh, an NC State Ph.D. student in Velev’s lab and first author of the paper, said in a statement.

In testing, the researchers demonstrated the ability to design reconfigurable meshes, while the robotic structure was able to grab a small aluminum foil ball, as well as carry a single water droplet and release it on demand through the mesh.

While they are able to demonstrate various features for the robot, the researchers said more work still must be done.

“For now, this is an early stage proof-of-concept for a soft robotic actuator,” Velev said.

While soft materials that respond to external stimuli have been proven applicable in next-generation robotics and health care devices, the materials have proven difficult to fabricate. However, 3D printing could be the most efficient fabrication technique due to its inherent rapid prototyping capabilities.

The study was published in Advanced Materials Technologies.