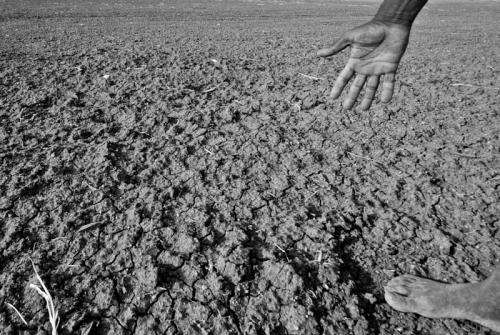 A photograph of a farmer showing his affected plot due to drought in Karnataka, India, 2012. Credit: Pushkarv/Wikipedia

Scientists from The Australian National University (ANU) have used new space technology to predict droughts and increased bushfire risk up to five months in advance.

ANU researcher Siyuan Tian said the team knew they needed to move into space to get closer to understanding the complex nature of drought.

They used data from multiple satellites to measure water below the Earth’s surface with unprecedented precision, and were able to relate this to drought impacts on the vegetation several months later.

“The way these satellites measure the presence of water on Earth is mind boggling,” said Ms Tian from the ANU Research School of Earth Sciences.

“We’ve been able to use them to detect variations in water availability that affect the growth and condition of grazing land, dryland crops and forests, and that can lead to increased fire risk and farming problems several months down the track.”

Co-researcher Professor Albert van Dijk said combining these data with a computer model simulating the water cycle and plant growth enabled the team to build a detailed picture of the water’s distribution below the surface and likely impacts on the vegetation months later.

“We have always looked up at the sky to predict droughts—but not with too much success,” said Professor van Dijk from the ANU Fenner School of Environment and Society.

“This new approach—by looking down from space and underground—opens up possibilities to prepare for drought with greater certainty. It will increase the amount of time available to manage the dire impacts of drought, such as bushfires and livestock losses.”

The drought forecasts will be combined with the latest satellite maps of vegetation flammability from the Australian Flammability Monitoring System at ANU to predict how the risk of uncontrollable bushfires will change over the coming months.

Dr. Paul Tregoning from the ANU Research School of Earth Sciences said the GRACE space gravity mission provided a measurement of changes in total water storage anywhere on Earth for the first time.

“Combined with measurements of surface water and top soil moisture from other satellites, this provides the ability to know how much water is available at different depths below the soil,” he said.

“What is innovative and exciting about our work is that we have been able to quantify the available water more accurately than ever before. This leads to more accurate forecasts of vegetation state, as much as five months in advance.”