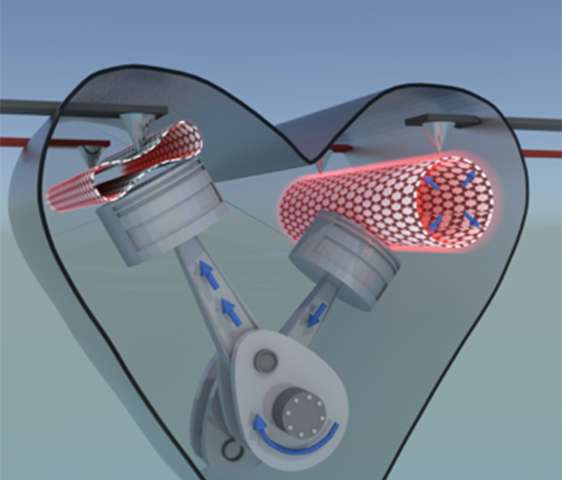 Molecular sized machines could in the future be used to control important mechanisms in the body. In a recent study, researchers at University of California, Berkeley and Umeå University show how a nanoballoon comprising a single carbon molecule ten thousand times thinner than a human hair can be controlled electrostatically to switch between an inflated and a collapsed state.

Inﬂatable balloon actuators are commonly used for macroscopic applications to lift buildings, as impact protection in cars or to widen narrowed or obstructed arteries or veins. At the micro scale they are used as micro pumps and in nature jumping spiders create microformat fluid-filled cushions to power their legs in explosive jumps.

Interestingly, at the nanoscale, balloon actuators are virtually unknown. However, a few years ago researchers at the Penn State University theoretically proposed a charge controlled nanoballoon actuator based on the collapsing and reinﬂation of a carbon nanotube.

Now, this has been realized experimentally by Hamid Reza Barzegar and his colleagues. In a study published in the journal of Nano Letters they show how a carbon nanotube, which can be visualized as a cylindrical tube of carbon atoms, can be controlled to transform from a collapsed to an inflated state and vice versa by applying a small voltage. The defect-free nature of carbon nanotubes imply that such an actuator would be able to work without wear or fatigue. This is also shown by the researchers who run the actuator over several cycles with no signs of loss in performance.

“The work is conceptually interesting and gives insight into the complexity of how to control motion at the nanoscale by external stimuli” said Hamid Reza Barzegar, doctor of Physics at Umeå University, now working at UC Berkeley in professor Alex Zettl’s research group. “It also gives insight into fundamental physics such as how the capacitance effect and in general the electrostatic forces can be used to control the dynamics of molecular structures.”

“In a longer perspective one can also envision how our findings could be used for pneumatic control on molecular level or for designing molecular containers that can open or close by controlling the surface charges of the molecules, by for example tuning the pH of the solution in which the molecules are dispersed. This could for example be of use for medical applications such as for delivering medicine to internal organs or tumors” says Thomas Wågberg, associate professor of Physics at Umeå University.

The discovery of molecular machines was awarded this year’s Nobel prize in Chemistry. Jean-Pierre Sauvage, Fraser Stoddart and Bernard Feringa got the prize for having developed molecules with controllable movements, which can perform a task when energy is added.