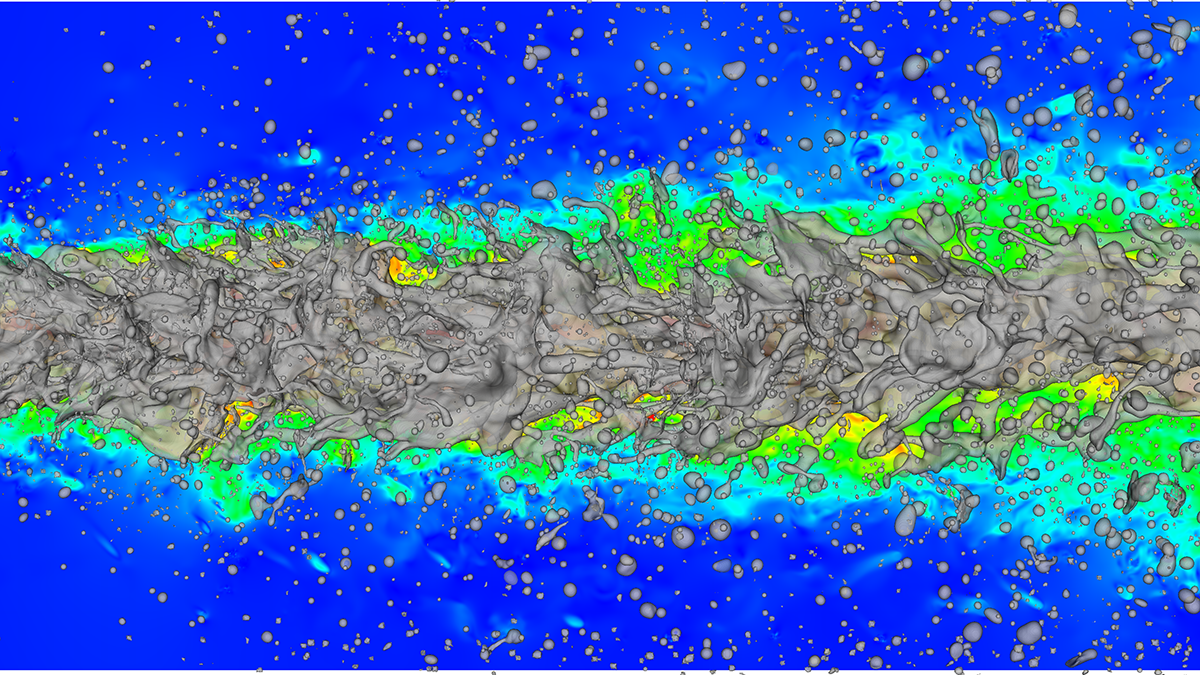 Visualization of the liquid surface and velocity magnitude of a round jet spray. (Copyright: Bundeswehr University Munich)

Whether it is designing the most effective method for fuel injection in engines, building machinery to water acres of farmland, or painting a car, humans rely on liquid sprays for countless industrial processes that enable and enrich our daily lives.

To understand how to make liquid jet spray cleaner and more efficient, though, researchers have to focus on the little things: Scientists must observe fluids flowing in atomic, microsecond detail in order to begin to understand one of science’s great challenges—turbulent motion in fluids.

Experiments serve as an important tool for understanding industrial spray processes, but researchers have increasingly come to rely on simulation for understanding and modelling the laws governing the chaotic, turbulent motions present when fluids are flowing quickly.

A team of researchers led by professor Markus Klein, Ph.D., at the Bundeswehr University Munich (German: Universität der Bundeswehr München) understood that modelling the complexities of turbulence accurately and efficiently requires it to employ high-performance computing (HPC), and recently, it has been using Gauss Centre for Supercomputing (GCS) resources at the Leibniz Supercomputing Centre (LRZ) in Garching near Munich to create high-end flow simulations for better understanding turbulent fluid motion.

“Our goal is to develop simulation software that someone can apply commercially for real engineering problems,” says Josef Haßlberger, Ph.D., collaborator on the Klein team. He works together with collaborator Sebastian Ketterl on the computational project. The team’s research recently was chosen for the cover of the Journal of Fluid Mechanics.

When scientists and engineers speak of liquid sprays, there is a bit more nuance to it than that—most sprays are actually multiphase phenomena, meaning that some combination of a liquid, solid, and gas are flowing at the same time. In sprays, this generally happens through atomization, or the breakup of a liquid fluid into droplets and ligaments, eventually forming vapours in some applications.

Researchers need to account for this multiphase mixing in their simulations with enough detail to understand some of the minute, fundamental processes governing turbulent motions—specifically, how droplets form, coalesce and break-up, or the surface tension dynamics between liquids and gases—while also capturing a large enough area to see how these motions impact jet sprays. Droplets are formed and influenced by turbulent motion, but also further influence turbulent motion after forming, creating the need for very detailed and accurate numerical simulation.

When modeling fluid flows, researchers have several different methods they can use. Among them, direct numerical simulations (DNS) offer the highest degree of accuracy, as they start with no physical approximations about how a fluid will flow and recreates the process “from scratch” numerically down to the smallest levels of turbulent motion (“Kolmogorov-scale” resolution). Due to its high computational demands, DNS simulations are only capable of running on the world’s most powerful supercomputers, such as SuperMUC at LRZ.

Another common approach for modeling fluid flows, large-eddy simulations (LES), make some assumptions about how fluids will flow at the smallest scales, and instead focus on simulating larger volumes of fluids over longer periods of time. For LES simulations to accurately model fluid flows, though, the assumptions built into the model must rely on quality input data for these small-scale assumptions, hence the need for DNS calculations.

To simulate turbulent flows, the researchers created a three-dimensional grid with more than a billion individual small cells, solving equations for all forces acting on this fluid volume, which according to Newton’s second law, give rise to a fluid accelerating. As a result, the fluids velocity can be simulated in both space and time. The difference between turbulent and laminar, or smooth, flows depends on how fast a fluid is moving as well as how thick, or viscous, it is and in addition to the size of the flow structures. Then researchers put the model in motion, calculating liquid properties from the moment it leaves a nozzle until it has broken up into droplets.

Based on the team’s DNS calculations, it began developing new models for fine-scale turbulence data that can be used to inform LES calculations, ultimately helping to bring accurate jet spray simulations to a more commercial level. LES calculates the energy carrying large structures, but the smallest scales of the flow are modelled, meaning that LES calculations potentially provide high accuracy for a much more modest computational effort.

Flowing in the right direction

Although the team has made progress in improving LES models through gaining a more fundamental understanding of fluid flows through its DNS simulations, there is still room for improvement. While the team can currently simulate the atomization process in detail, it would like to observe additional phenomena taking place on longer time scales, such as evaporation or combustion processes.

Next-generation HPC resources will help to close the gap between academic-caliber DNS of flow configurations and real experiments and industrial applications. This will give rise into more realistic databases for model development and will provide detailed physical insight into phenomena that are difficult to observe experimentally.

In addition, the team has more work to do to implement its improvements to LES models. The next challenge is to model droplets that are smaller than the actual grid size in a typical large-eddy simulation, but still can interact with the turbulent flow and can contribute to momentum exchange and evaporation.