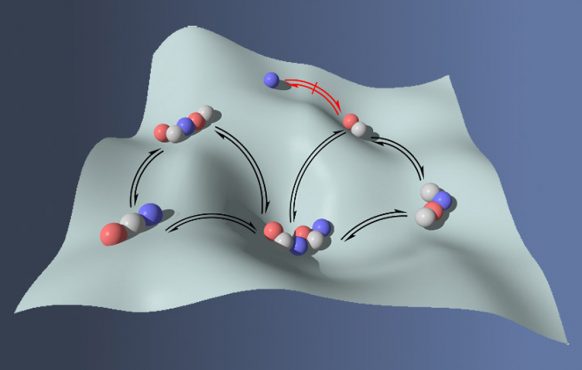 Research led by Rein Ulijn, Director of the CUNY Advanced Science Research Center (ASRC)’s Nanoscience Initiative and Professor of Chemistry at Hunter College, has paved the way for the development of dynamically-evolving polymers that form spontaneously by adapting to their environment, which may lead to a number of product possibilities including drug delivery, food science and cosmetics, the results of which were published today in Nature Nanotechnology.

By allowing these peptides—strings of polymers composed of amino acids—to continuously reorganize their sequences, they will eventually form those polymers that are most suited to the environment at the expense of less favored structures. This method, which is inspired by the principles of evolution, allowed Ulijn’s team to identify a range of heretofore unseen peptide-based materials. While previous research in peptide nanotechnology centered on chance discoveries or painstaking design, the new approach allows for unbiased discovery by self-selection of optimized structures.

“In our quest to find materials based on biology’s building blocks—but which are much simpler-it is difficult to rationally design these materials because there are very many possible permutations that could be explored,” Ulijn said.

“Instead of designing rationally to improve materials, we’ve found a way to autonomously evolve,” said Charalampos Pappas, first author, and former CUNY ASRC postdoctoral researcher. “We achieve this by having components dynamically connect, rearrange and disconnect, resulting in the spontaneous selection and formation of the most stable self-assembling nanostructures.”

The paper, entitled “Dynamic peptide libraries for the discovery of supramolecular nanomaterials,” is a continuation of Ulijn’s research of tunable peptide structures, which have shown great promise in a variety of commercial applications. These include nanospheres which can be biodegradable and could potentially be used in drug delivery applications, as well as nanofibers which form gel-phase materials, that can be used in a variety of applications, including cosmetics or biodegradable plastics that can withstand harsh conditions.

The evolution-based peptide discovery method does not yet cover the full range of chemical functionalities present in natural materials and it is currently a time-consuming process. “These issues can potentially be overcome by automation and miniaturization of the process, which is the focus of current research,” Ulijn said.