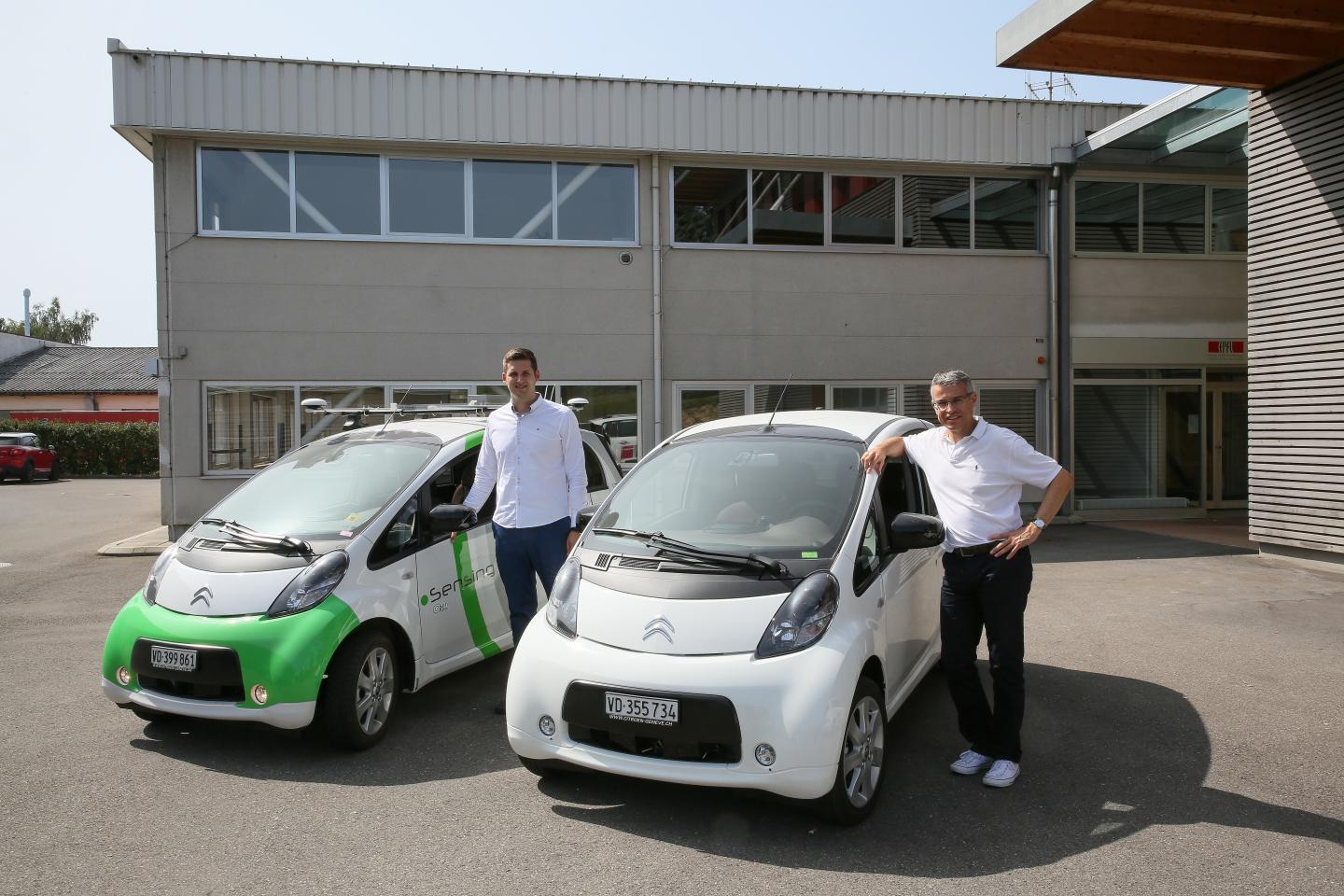 This is an image of Milos Vasic, PhD, and Alcherio Martinoli, head of the Distributed Intelligent Systems and Algorithms Laboratory. They made two regular cars intelligent using off-the-shelf equipment. Source: Copyright Alain Herzog/EPFL

Intelligent vehicles get their intelligence from cameras, Light Detection and Ranging (LIDAR) sensors, and navigation and mapping systems. But there are ways to make them even smarter. Researchers at EPFL are working to improve the reliability and fault tolerance of these systems by combining the data they gather with that from other vehicles. This can, for example, extend the field of view of a car that is behind another car. Using simulators and road tests, the team has developed a flexible software framework for networking intelligent vehicles so that they can interact.

“Today, intelligent vehicle development is focused on two main issues – the level of autonomy and the level of cooperation,” says Alcherio Martinoli, who heads EPFL’s Distributed Intelligent Systems and Algorithms Laboratory (DISAL). Over the past several years, his team has been working on cooperation issues, which have yet to garner much attention from the automotive industry. As part of his PhD thesis, Milos Vasic has developed cooperative perception algorithms, which extend an intelligent vehicle’s situational awareness by fusing data from onboard sensors with data provided by cooperative vehicles nearby.

The researchers used the cooperative perception algorithms as the basis for the software framework. For example, in a scenario in which one car overtakes another car on a two-lane road, they developed an assistance system that assesses the risk of the overtaking manoeuver. The risk assessment factors in the probability of an oncoming car in the opposite lane as well as kinematic conditions such as driving speeds, the distance required to overtake and the distance to the oncoming car. Cooperative perception means that an intelligent vehicle can combine its own data with that of another vehicle – such as the one it wants to overtake, which has a wider field of view. In this way, the decision whether or not to overtake can be made safely. According to Vasic, “cooperative perception makes overtaking safer and more fluid.”

Seeing two pedestrians instead of one

At first, the team used a simulator to test their algorithms under various scenarios, both with and without cooperative vehicles nearby. Then, with help from Groupe PSA, they took their project on the road. Two Citroen C-Zero electric cars were retrofitted with a Mobileye camera, an accurate localization system, a router to enable Wi-Fi communication, a computer to run the software and an external battery to power everything. “These were not autonomous vehicles,” says Martinoli, “but we made them intelligent using off-the-shelf equipment.”

Success did not come easily, however. One of the difficulties in fusing data from the two vehicles involved relative localization. The cars needed to be able to know precisely where they are in relation to each other as well to objects in the vicinity. If a single pedestrian does not appear to both cars to be in the same exact spot, there is a risk that, together, they will see two figures instead of one. By using other signals, particularly those provided by the LIDAR sensors and cameras, the researchers were able to correct flaws in the navigation system and adjust their algorithms accordingly. This exercise was all the more challenging as the data had to be processed in real time while the vehicles were in motion. “Because of this, the project also helped improve the accuracy of localization more generally,” Vasic says. Although the tests involved only two vehicles, the longer-term goal is to create a network between multiple vehicles as well with the roadway infrastructure.

In addition to driving safety and comfort, cooperative networks of this sort could eventually be used to optimize a vehicle’s trajectory, save energy and improve traffic flows. The team is aware, however, that many questions – which are beyond the scope of their research – remain unanswered. To begin with, there is the issue of liability in the case of an accident. Determining liability – which already involves the owner, car manufacturer and software designer or supplier – becomes even more complicated when vehicles cooperate. “The answers to these issues will play a key role in determining whether autonomous vehicles are accepted,” adds Martinoli.