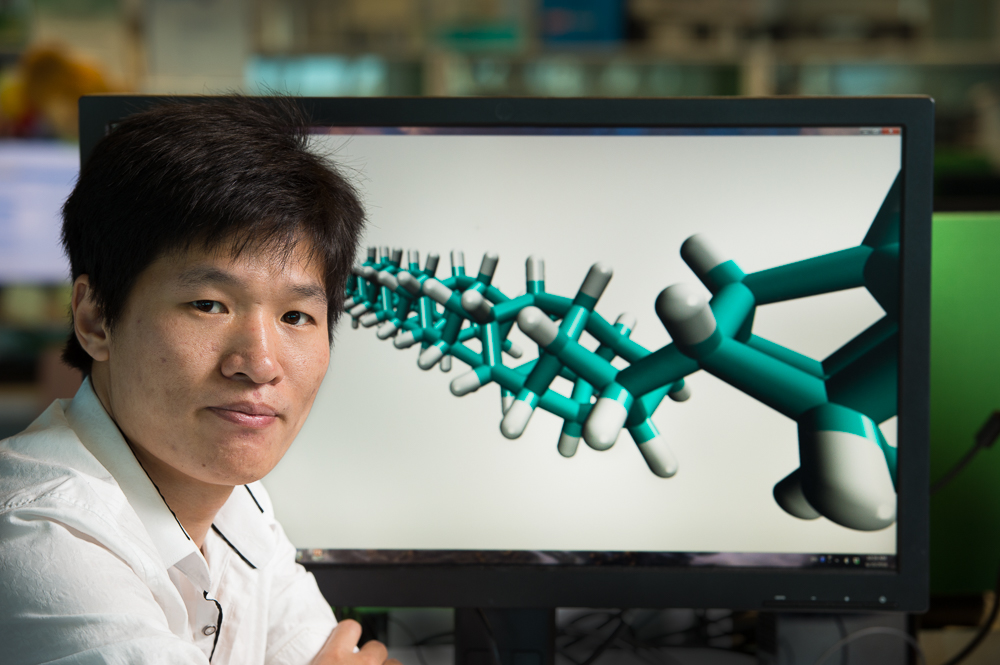 QUT’s Haifei Zhan, Ph.D., is leading a global effort to work out how many ways humanity can use a newly-invented material with enormous potential – diamond nanothread (DNT). (Credit: Queensland University of Technology)

Would you dress in diamond nanothreads? It’s not as far-fetched as you might think. And you’ll have a Brisbane-based carbon chemist and engineer to thank for it.

QUT‘s Haifei Zhan, Ph.D., is leading a global effort to work out how many ways humanity can use a newly-invented material with enormous potential – diamond nanothread (DNT).

“DNT, by comparison, is even thinner, incorporating kinks of hydrogen in the carbon’s hollow structure, called Stone-Wale (SW) transformation defects, which I’ve discovered reduces brittleness and adds flexibility,” said Zhan, from QUT’s School of Chemistry, Physics and Mechanical Engineering. “That structure makes DNT a great candidate for a range of uses. It’s possible DNT may become as ubiquitous a plastic in the future, used in everything from clothing to cars. I feel very lucky to have this chance to study a new material in depth – blue-sky applied research opportunities like this are rare.”

DNT does not look like a rock diamond. Rather, its name refers to the way the carbon atoms are packed together, similar to diamond, giving it its phenomenal strength.

Zhan has been modelling the properties of DNT since it was invented, using large-scale molecular dynamics simulations and high-performance computing.

He was the first to realise the SW defects were the key to DNT’s versatility.

“While both carbon nanotubes and DNT have great potential, the more I model DNT properties, the more it looks to be a superior material,” Zhan said. “The SW defects give DNT a flexibility that rigid carbon nanotubes can’t replicate – think of it as the difference between sewing with uncooked spaghetti and cooked spaghetti. My simulations have shown that the SW defects act like hinges, connecting straight sections of DNT. And by changing the spacing of those defects, we can a change – or tune – the flexibility of the DNT.”

That research is published in the peer-reviewed publication Nanoscale.

Zhan has also published a number of other results from his DNT-modelling research:

“Further modelling is needed to fully investigate all the properties of DNT. However, I am excited about the potential range of applications it could be used for, given we’ve proven we can control its flexibility, conductivity and strength,” Zhang said.”Carbon is the most abundant element on the planet. It’s a renewable resource, so the cost of the raw material is extremely low. Once the manufacturing costs are viable, DNT would likely be used primarily in mechanical applications, combined with other materials to make ultra-strong, light-weight composites and components – such as plane fuselages. I plan to test how DNT performs as a two-dimensional networked structure – a sheet or layer – for potential use in flexible electronics and screens.”

“I also want to test is viability as a fibre for textiles or rope, from bullet-proof vests and hard-wearing work gear to a replacement for steel cables in bridge construction,” Zhan concluded. “There’s already talk in the global carbon community of DNT being the best candidate yet for building a space elevator. It would be a real honour if my research contributed to the development of DNTs for that purpose.”