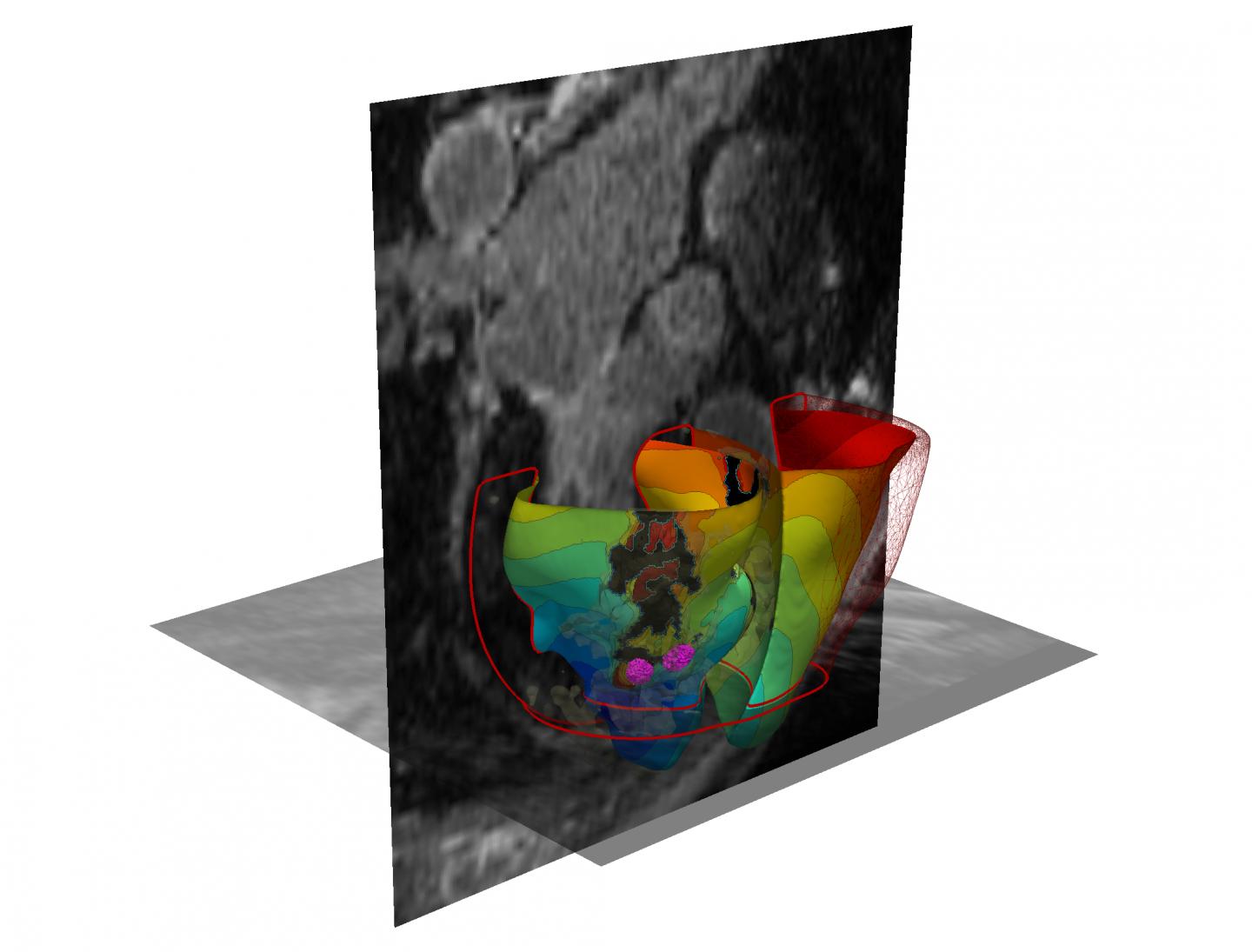 This is a 3D virtual heart. Credit: Johns Hopkins University

In a proof of concept study, scientists at Johns Hopkins report they have successfully performed 3D personalized virtual simulations of the heart to accurately identify where cardiac specialists should electrically destroy cardiac tissue to stop potentially fatal irregular and rapid heartbeats in patients with scarring in the heart. The retrospective analysis of 21 patients and prospective study of five patients with ventricular tachycardia, the researchers say, demonstrate that 3D simulation-guided procedures are worthy of expanded clinical trials.

Results of the study are described in the Sept. 3 issue of Nature Biomedical Engineering.

“Cardiac ablation, or the destruction of tissue to stop errant electrical impulses, has been somewhat successful but hampered by a lot of guesswork and variability in the way that physicians figure out which locations to zap with a catheter,” says Natalia Trayanova, Ph.D., the Murray B. Sachs Professor in the Department of Biomedical Engineering at The Johns Hopkins University Schools of Engineering and Medicine. “Our new study results suggest we can remove a lot of the guesswork, standardize treatment and decrease the variability in outcomes, so that patients remain free of arrhythmia in the long term,” she adds.

When a normal heart contracts to pump blood throughout the body, a wave of electrical signals flows through the heart, stimulating each cardiac cell to contract–one after the other–in a normal rhythm. After the heart contracts, it relaxes and refills with blood.

In people with ventricular tachycardia, the electrical signals in the heart’s lower chambers misfire and get stuck within the fist-size organ, crippling the relaxation and refilling process and producing rapid and irregular pulses–or arrhythmias–linked to an estimated 300,000 sudden cardiac deaths in the U.S. each year.

Numerous drugs are available to treat and manage so-called infarct-related ventricular tachycardia, but side effects and limitations of the drugs have increased focus on other interventions, especially the potential of cardiac ablation that essentially “rewires” the electrical signaling that gives rise to the arrhythmias. Trayanova says current estimates indicate that cardiac ablation is successful anywhere between 50 and 88 percent of the time, but outcomes are difficult to predict.

To perform a traditional ablation, doctors thread a catheter through blood vessels to reach the heart, and use radiofrequency waves to destroy regions in the heart tissue believed to sustain and propagate erratic electrical waves. Mapping of the heart’s electrical functioning with a catheter is used to locate likely problem areas, but as Trayanova notes, precise pinpointing of those tissues has been a challenge.

In a bid to locate arrhythmias more precisely, Trayanova and her research team developed 3D personalized computational models of patients’ hearts based on contrast-enhanced clinical MRI images. Each heart tissue cell in the model generates electrical signals with the aid of mathematical equations representing how heart cells behave when they are healthy, or when they are semiviable when near the scar. By poking the patient’s virtual heart with small electrical signals in different locations, the computer program then determines whether the heart develops an arrhythmia and the location of the tissue that perpetuates it. Using the model, Trayanova then simulates an ablation to that area of the heart and runs the computer program over and over to find multiple locations that doctors should ablate on the actual patient.

Among the experiments in the current study, Trayanova and her team used MRI images to create personalized heart models of 21 people who previously had successful cardiac ablation procedures for infarct-related ventricular tachycardia at The Johns Hopkins Hospital between 2006 and 2017. The 3D modeling of these patients correctly identified and predicted the locations where physicians ablated heart tissue. In five patients, the amount of ablated tissue identified by the 3D model was smaller overall–in some cases, more than 10 times smaller–than the area that was destroyed during the patients’ procedures.

Next, the research team tested the 3D simulation to guide cardiac ablation treatments for three patients with ventricular tachycardia at the University of Utah and two patients at the University of Pennsylvania. Two patients who received the simulation-guided ablation procedure have remained free of tachycardia throughout follow-up periods of 23 and 21 months. One patient who had the simulation procedure remained free of tachycardia after two months of follow up. In two patients, the virtual heart approach predicted that tachycardias would not be inducible — this was confirmed during the clinical procedure, so cardiac ablation was not performed.

With this prospective test, the research team demonstrated the feasibility of integrating a computer-simulated prediction into the clinical routine. The patient is scanned approximately 24 hours or less before the procedure. Then, the simulation is created and a prediction is made of where physicians should perform the ablation. Finally, the predicted set of ablation targets is imported into the mapping system before the patient’s procedure so that the ablation catheter is navigated directly to the predicted targets.

The study represents the first attempt to incorporate personalized simulation predictions as part of anti-arrhythmia treatment. The researchers believe that implementing these predictions will cut down the lengthy and invasive cardiac mapping process and reduce complications experienced by patients. The technology could also reduce the need for repeat procedures through its ability to make the infarcted heart incapable of creating new arrhythmias.

“It’s an exciting blend of engineering and medicine,” says Trayanova.

“One of the main challenges of catheter ablation is that we are performing procedures on very sick patients with advanced heart disease who have multiple areas in their heart that could sustain arrhythmias,” says Jonathan Chrispin, M.D., Robert E. Meyerhoff Assistant Professor of Medicine at the Johns Hopkins University School of Medicine, who will lead the clinical trials of this technology. “We are excited to begin testing Trayanova’s approach in a prospective clinical trial. We are hopeful that it can help us achieve our overarching goal of improving quality of life for patients suffering from treatment-resistant ventricular tachycardia.”

Trayanova says the results of a clinical trial are needed to validate the promise of personalized simulation guidance for infarct-related ablation treatments. Further clinical study planned at The Johns Hopkins Hospital was recently approved by the Food and Drug Administration under an investigational device exemption.