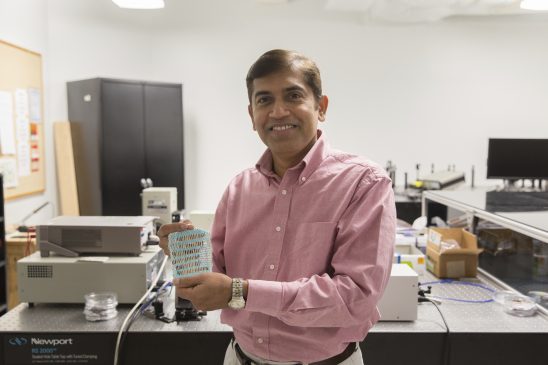 UCF professor Jayan Thomas has developed filaments that could enable clothing to store and use solar energy. (Credit: UFC)

A University of Central Florida scientist is making the self-lacing Nikes Marty McFly wore in Back to the Future Part II a reality.

Associate professor Jayan Thomas, a nanotechnology scientist at UCF’s NanoScience Technology Center, has developed filaments that harvest and store the sun’s energy that can be woven into textiles that could enable jackets and other clothing to be wearable, solar-powered batteries that would never have to be plugged in.

Thomas said the 1989 movie starring Michael J. Fox was the basis for his project, which could one day revolutionize wearable technology, helping soldiers who now carry heavy loads of batteries or help people constantly texting to charge their smart phones.

“A major application could be with our military,” Thomas said in a statement. “When you think about our soldiers in Iraq or Afghanistan, they’re walking in the sun.

“Some of them are carrying more than 30 pounds of batteries on their bodies. It is hard for the military to deliver batteries to these soldiers in this hostile environment. A garment like this can harvest and store energy at the same time if sunlight is available.”

In 2015, Thomas was honored during the R&D 100 Awards for his development of a cable that can both transmit energy like a normal cable but also store energy like a battery.  He’s also worked on semi-transparent solar cells that can be applied to windows, allowing some light to pass through while also harvesting solar power.

Both research projects led to the recent advancement.

“The idea came to me: We make energy-storage devices and we make solar cells in the labs. Why not combine these two devices together?” he said.

Thomas and his research team developed filaments in the form of copper ribbons that are thin, flexible and lightweight that have a solar cell on one side and energy-storing layers on the other. They then wove the ribbons into a square of yarn.

The experiment proved that the filaments could be laced throughout jackets and other outerwear to harvest and store energy to power a variety of personal equipment like phones, personal health sensors and other tech gadgets.

Other uses include electric cars that could generate and store energy whenever they’re in the sun.

“That’s the future. What we’ve done is demonstrate that it can be made,” Thomas said. “It’s going to be very useful for the general public and the military and many other applications.”

The study, which was published in Nature Communications, can be viewed here.