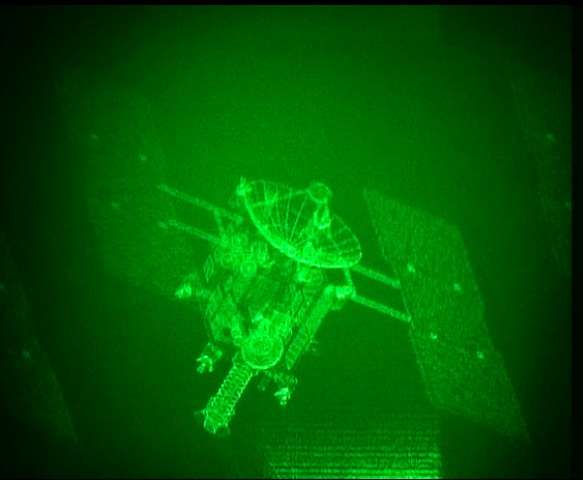 Japanese computer scientists have developed a special purpose computer that can project high-quality three-dimensional (3-D) holography as video. The research team led by Tomoyoshi Ito, who is a professor at the Institute for Global Prominent Research, Chiba University, has been working to increase the speed of the holographic projections by developing new hardware.

Holography has a long history. Since 1960 when the first laser was invented, many works involving laser holograms have been produced. For digitalizing these analog technologies and developing electron holography techniques to project 3-D holography images as video, computing powers with more than 10 frames per second and 1 trillion pixels per frame are required. Therefore, hardware development, as well as corresponding software development, represents some of the biggest challenges for researchers in this field.

Also, to make a 3-D object from two-dimensional (2-D) data, it is necessary to consider several factors including the binocular parallax, motion parallax, convergence angle, focus adjustment, and estimates made based on human experience. Currently, general 3-D televisions (TVs) use binocular parallax for the stereoscopy, but children cannot use this technology because it has the potential to damage their health, a risk that is related to the difference between the distances that a brain perceives and those that the eyes’ focus on. Many researchers around the world have been investing in video holography, which may allow more people to enjoy 3-D TVs safely.

Ito, who is an astronomer and a computer scientist, began working on specially designed computers for holography, called HORN, in 1992. The HORN-8, which adopts a calculation method, the amplitude type, for adjusting the intensity of light, was recognized as the world’s fastest computer for holography in a publication in the international science journal Nature Electronics on April 17, 2018.

With the newly developed “phase type” HORN-8, the calculation method for adjusting the phase of light was implemented, and the researchers were successful at projecting holography information as a 3-D video with high-quality images. This research was published in Optics Express on September 28, 2018.

“We have been developing high-speed computers for 3-D holography by implementing the knowledge of information engineering and the technology of electrical and electronic engineering and by learning insights from computer science and optical methods,” Ito said. “This is a result of the interdisciplinary approach of our research that has been conducted for over 25 years with the commendable effort by our students who have been studying at our lab.”

Takashi Nishitsuji, a former student of Ito’s lab and now assistant professor at Tokyo Metropolitan University, who led the experiment, said “HORN-8 is the fruit of many people’s wisdom, skills, and efforts. We want to continue the research of HORN and try other methods from various perspectives for its practical application.”

In the latest phase type of HORN-8, eight chips are mounted on the FPGA (Field Programmable Gate Array) board. This enables one to avoid a bottleneck problem for the processing speed with the calculation method, by which the chips are prevented from communicating with each other. With this approach, HORN-8 increases the computing speed in proportion to the number of chips, so that it can project video holography more clearly.