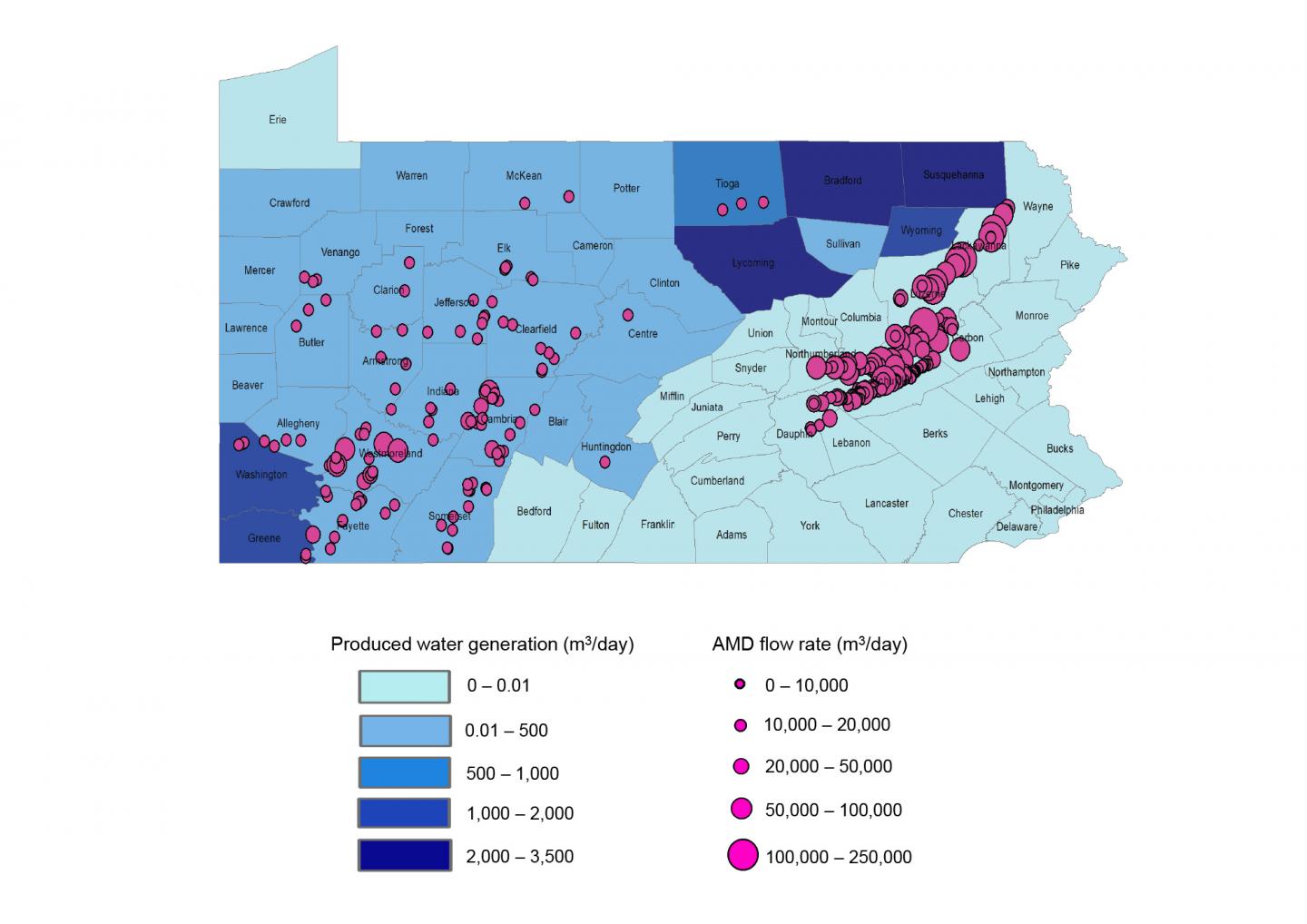 This is a map of Pennsylvania including the relative produced water generation volumes by county based on 2014 production data (indicated by the color gradient, m3/day) as well as the location and flow rate (m3/day) of AMD sites. Credit: Leanne Gilbertson. Reprinted with permission from Environmental Science & Technology. Copyright 2018 American Chemical Society.

Pennsylvania’s energy history is rich with the quantities of fossil fuels that it has produced, but is also rife with the environmental legacies of coal mining and, more recently, hydrofracturing. Water that finds its way into abandoned coal mines dotted throughout the Commonwealth resurfaces as acid mine drainage (AMD), while freshwater used to fracture or “frack” oil and natural gas deposits reemerges as “produced” water contaminated with salts, metals, and radioactive material.

Remediating both AMD and produced water is an expensive process and federal law prohibits produced water disposal at municipal water treatment plants. However, research from the University of Pittsburgh Swanson School of Engineering, published recently in Environmental Science & Technology, found that co-treatment of the two fluids may not only solve two environmental issues at once, but also reduce the environmental impact of both legacy wastes.

“This study is the serendipitous result of three different researchers finding a common theme to unite the collaboration. Radisav’s group developed the method for co-treating AMD and produced water and he is a leading researcher in the field of produced water treatment via membrane distillation, while Vikas’s group focuses on complex systems analysis,” Dr. Gilbertson explained. “My expertise in life cycle assessment brings a new perspective to these industries and a way to quantify the environmental and human health impact tradeoffs of alternative approaches to utilizing these two wastewaters.”

Dr. Gilbertson and her group focused on a five county region of southwestern Pennsylvania impacted by both AMD and hydrofracturing – Allegheny, Fayette, Greene, Washington, and Westmoreland counties. The research targeted three critical, mutual aspects of remediation – co-treatment of produced water and AMD, transportation of water to and from mine and drill sites, and avoiding AMD discharge to the environment. Dr. Gilbertson’s LCA found that co-treating AMD and produced water is beneficial because, while the chemical composition of each fluid varies from site to site, the two byproducts share opposite amounts of barium and sulfates which, when combined, can be removed via precipitation. The resulting fluid can then be used to replace freshwater in future fracking operations while the barite produced by this process can be used in drilling operations.

Dr. Gilbertson noted that this result is important because it creates value of out two significant waste products and precludes environmental impacts of AMD. “While the combined produced water volume from fracking is 4,450 cubic meters per day, there is a staggering 281,000 cubic meters of orphaned AMD produced daily in the region. Mitigating the two via co-treatment would result in reduced freshwater use and become a net environmental benefit.”

But even with the potential positive impact of co-treatment, transporting the fluids between mining and drilling sites could create a significant, negative tradeoff. It will be a balance between the proposed and current handling of produced water, which his often transported significant distances for treatment, or out of state for disposal via large trucks logging several hundred thousand miles per year.

To minimize these significant impacts, which include not only fuel use but also road wear and truck exhaust, Dr. Khanna and his PhD student, Sakineh Tavakoli, developed a model to identify the optimal locations for co-treatment sites between AMD and gas wells in the five-county region. Although costs associated with optimized co-treatment may be higher than using freshwater, the environmental benefits could be significant. Another potential option currently being piloted by Drs. Vidic and Khanna is a mobile membrane distillation system that would be powered by waste heat generated during drilling to treat produced water on site.

And although the optimization model was developed using mining and gas well sites in the five-county region, the researchers note that this approach can be applied to other areas in Pennsylvania, and throughout the U.S. using similar data. Ms. Wang added that what is novel about this research is that the group attempted to quantify the benefits of not releasing AMD into ecosystems and the environment.

“These are “credits” to the system that you wouldn’t necessarily think about. For example, by utilizing AMD as a fracking fluid, we’re greatly reducing the amount of freshwater that would be wasted. Similarly, by optimizing transportation routes and developing mobile treatment sites, we are significantly reducing the environmental impact of long-haul trucking,” Ms. Wang said. “Most importantly, by using AMD as a resource, we are helping to mitigate a legacy waste from the environment that then improves remediation efforts. In short, the cascade effect of co-treating these two waste products can be a net benefit for Pennsylvania.”