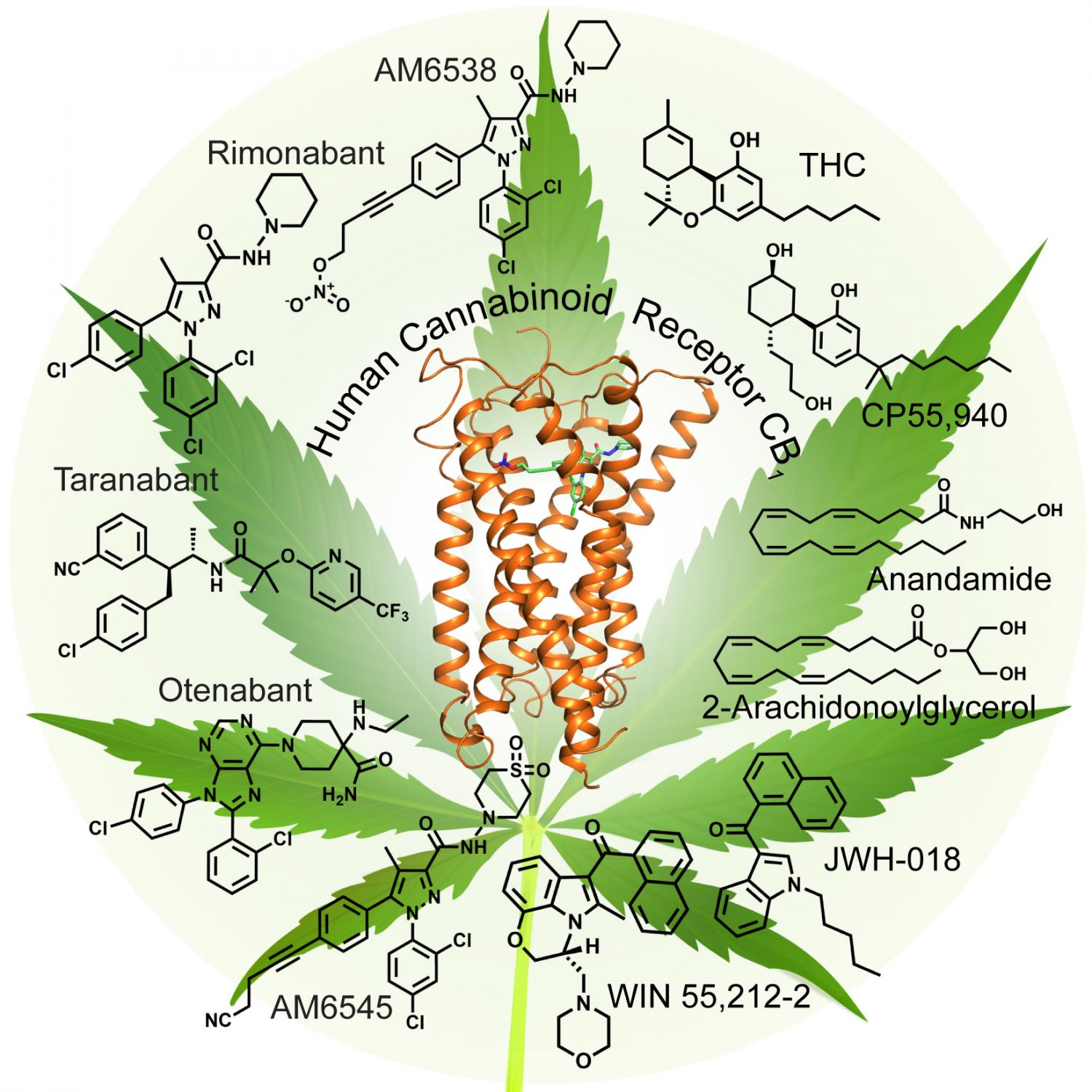 A model of the CB1 receptor shows the structure of the receptor in green, along with the stabilizing molecule AM6538 in the central binding pocket. The researchers used this model to examine how different cannabinoid molecules bind to and activate the receptor. (Credit: Yekaterina Kadyshevskaya, Stevens Laboratory, USC)

Researchers have the clearest picture yet of the receptor that causes the “high” associated with marijuana. The three-dimensional image of cannabinoid receptor 1, revealed Oct. 20 in Cell, reveals how molecules like THC bind to cannabinoid receptor 1, which is found to be embedded in the surface of many nerve cells. This could explain how pain medications meant to mimic cannabis use without the “high” can cause unintended side effects and provide a foundation for future therapies.

“With marijuana becoming more popular with legislation in the United States, we need to understand how molecules like THC (the psychoactive component of marijuana) and the synthetic cannabinoids interact with the receptor, especially since we’re starting to see people show up in emergency rooms when they use synthetic cannabinoids,” said co-author Raymond Stevens, professor at the iHuman Institute, ShanghaiTech University and Provost Professor of Biological Science and Chemistry at the University of Southern California.

“Researchers are fascinated by how you can make changes in THC or synthetic cannabinoids and have such different effects,” says Stevens. “Now that we finally have the structure of CB1, we can start to understand how these changes to the drug structure can affect the receptor.”

For example, cannabis-derived therapies have been used as a medication for obesity, but, upon investigation, researchers found that the therapeutic molecules could trigger depression, anxiety, and even suicidal tendencies, so the drug was pulled off the market. Currently, researchers are watching for potential side effects related to synthetic cannabinoids, such as Spice and K2, which aim to replicate the “high” associated with THC but instead are triggering trips to the emergency room.

“We need to understand how marijuana works in our bodies; it can have both therapeutic potential and recreational use, but cannabinoids can also be very dangerous,” said iHuman Institute Prof. Zhi-jie Liu, co-leader of the study. “By doing both the basic science and understanding how this receptor works, we can then use it to help people in the future.”