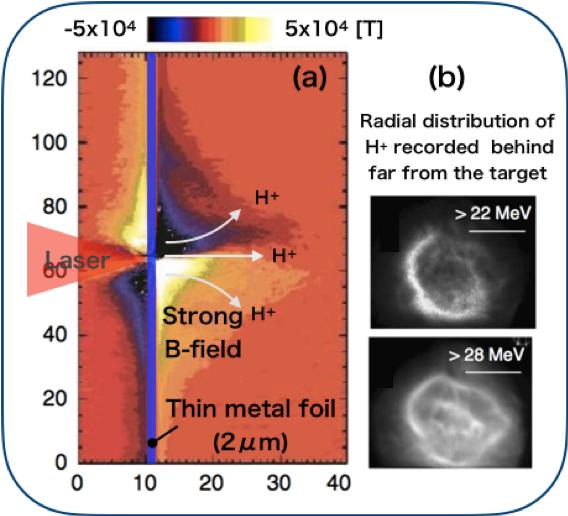 Quasistatic magnetic fields computed by a laser-plasma simulation code, PICLS (a). Radiographic images of high energy protons which have a ring structure due to the magnetic diffraction.

Shine a powerful laser onto a solid, and you get a beam of high-energy protons. Far from being a curiosity, this phenomenon has important applications, such as in neutron-generation research. Theoretically, the more intense the laser, the faster (in other words, more energetic) the resulting protons. However, we recently seem to have hit a wall, with stronger lasers failing to yield the expected boost in acceleration.

The problem occurs when trying to push the proton energies beyond about 100 mega-electronvolts. Up to that point, the energies scale nicely with the laser intensities, allowing a simple formula to predict the output from the input. At higher intensities, though, the theory breaks down, and significantly overestimates the beam energy, for reasons not fully understood. Now, in a Nature Communications study, an international team of scientists led by Osaka University has uncovered a piece of the puzzle.

Proton acceleration is really a secondary effect of laser bombardment. Initially, the laser expels out electrons from the thin solid target. Moving close to the speed of light, these electrons then create a powerful electric field, known as a sheath field, and it is this that accelerates the nearby protons. However, the Osaka researchers realized that earlier theories overlooked a crucial stumbling block: magnetism.

“The sheath effectively forms a slope, and the protons accelerate through this slope at right-angles to the target,” explains study lead author Motoaki Nakatsutsumi. “Unfortunately, the electrons that build the sheath also generate a current, which gives rise to a magnetic field, called a B-field. This magnetism jeopardizes the whole process by trapping electrons on the target surface. While, protons are deflected away from the sheath.”

Aided by simulations, the team explored two strategies to minimize this effect. Noticing that the B-field takes some time to reach maximum strength, they envisaged that extremely brief laser pulses may allow the protons to outrace it. This works up to a point. However, calculations showed that even pulses quicker than 100 femtoseconds would fail to prevent magnetic inhibition when the most intense lasers were used.

Their second idea was to use much thinner solid targets than the size of the laser spot, which weakens the effect of B-field on the electron trajectories. Unfortunately, the target thickness is limited by the laser temporal profile, so that we have to increase the laser spot size, which requires more laser energy, e.g. more expensive laser system.

“Magnetic inhibition could be a severe bottleneck for a range of particle acceleration methods,” Nakatsutsumi predicts. “It’s not just lasers – radiation acceleration could be affected too. So far we have not found a straightforward remedy. However, this is an innovative research area, and I have no doubt that the hurdle can be overcome. Our insights into the mechanism of inhibition will hopefully be a firm basis for the solution.”