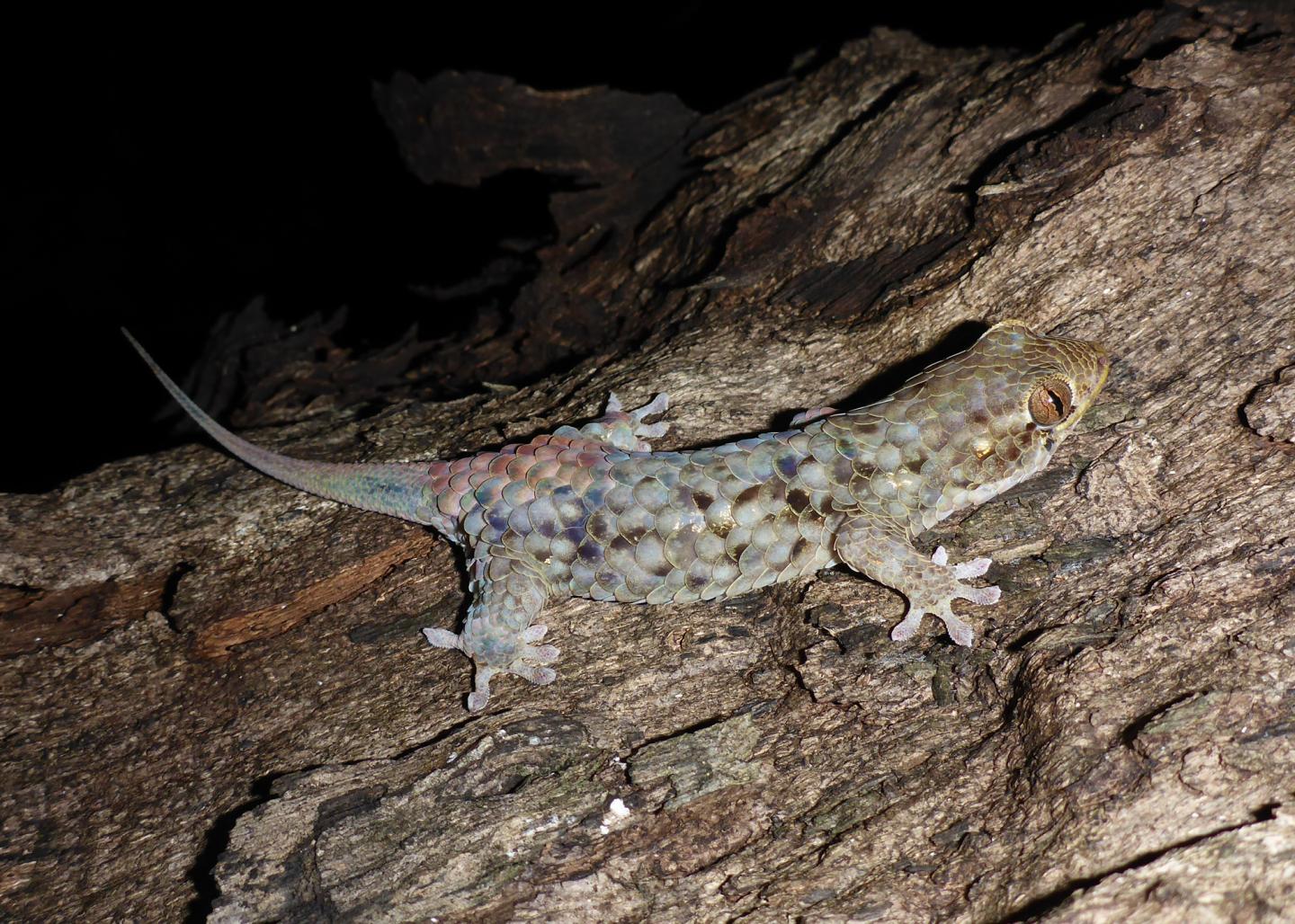 The new fish-scale gecko, Geckolepis megalepis, has the largest body scales of all geckos. This nocturnal lizard was discovered in the ‘tsingy’ karst formations in northern Madagascar. Source: F. Glaw

Many lizards can drop their tails when grabbed, but one group of geckos has gone to particularly extreme lengths to escape predation. Fish-scale geckos in the genus Geckolepis have large scales that tear away with ease, leaving them free to escape whilst the predator is left with a mouth full of scales. Scientists have now described a new species (Geckolepis megalepis) that is the master of this art, possessing the largest scales of any gecko.

The skin of fish-scale geckos is specially adapted to tearing. The large scales are attached only by a relatively narrow region that tears with ease, and beneath them they have a pre-formed splitting zone within the skin itself. Together, these features make them especially good at escaping from predators. Although several other geckos are able to lose their skin like this if they are grasped really firmly, Geckolepis are apparently able to do it actively, and at the slightest touch. And while others might take a long time to regenerate their scales, fish-scale geckos can grow them back, scar-free, in a matter of weeks.

This remarkable (if somewhat gruesome) ability has made these geckos a serious challenge to the scientists who want to study them. Early researchers described how it was necessary to catch them with bundles of cotton wool, to avoid them losing almost all of their skin. Today, little has changed, and researchers try to catch them without touching them if possible, by luring them into plastic bags. But once they are caught, the challenges are not over; identifying and describing them is even harder.

“A study a few years ago showed that our understanding of the diversity of fish-scale geckos was totally inadequate,” says Mark D. Scherz, lead author of the new study and PhD student at the Ludwig Maximilian University of Munich and Zoologische Staatssammlung München, “it showed us that there were actually about thirteen highly distinct genetic lineages in this genus, and not just the three or four species we thought existed. One of the divergent lineages they identified was immediately obvious as a new species, because it had such massive scales. But to name it, we had to find additional reliable characteristics that distinguish it from the other species.” A challenging task indeed: one of the main ways reptile species can be told apart is by their scale patterns, but these geckos lose their scales with such ease that the patterns are often lost by the time they reach adulthood. “You have to think a bit outside the box with Geckolepis. They’re a nightmare to identify. So we turned to micro-CT to get at their skeletons and search there for identifying features.” Micro-CT (micro-computed tomography) is essentially a 3D x-ray of an object. This method is allowing morphologists like Scherz to examine the skeletons of animals without having to dissect them, opening up new approaches to quickly study the internal morphology of animals.

By looking at the skeletons of the geckos, the team was able to identify some features of the skull that distinguish their new species from all others. But they also found some surprises; a species named 150 years ago, Geckolepis maculata, was confirmed to be different from the genetic lineage that it had been thought to be. “This is just typical of Geckolepis. You think you have them sorted out, but then you get a result that turns your hypothesis on its head. We still have no idea what Geckolepis maculata really is–we are just getting more and more certain what it’s not.”

The new species, Geckolepis megalepis, which was described by researchers from the US, Germany, and Columbia in a paper published today in the open access journal PeerJ, is most remarkable because of its huge scales, which are by far the largest of any gecko. The researchers hypothesize that the larger scales tear more easily than smaller scales, because of their greater surface area relative to the attachment area, and larger friction surface. “What’s really remarkable though is that these scales–which are really dense and may even be bony, and must be quite energetically costly to produce–and the skin beneath them tear away with such ease, and can be regenerated quickly and without a scar,” says Scherz. The mechanism for regeneration, which is not well understood, could potentially have applications in human medicine, where regeneration research is already being informed by studies on salamander limbs and lizard tails.