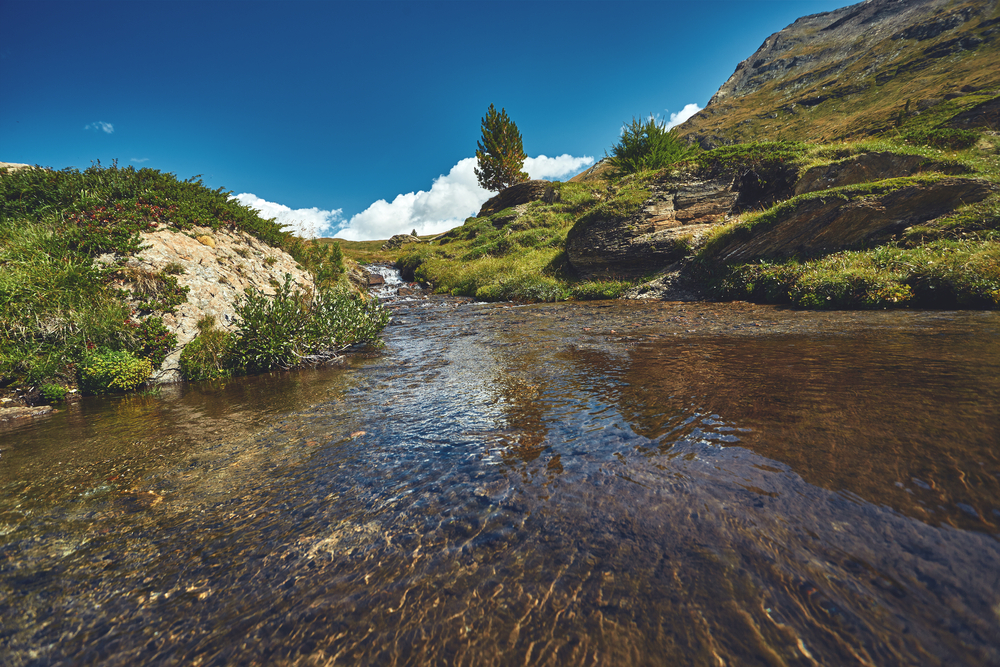 An EPFL study has for the first time measured the impact of climate change on alpine streams, and the results are quite worrying: after a low-snow winter, these streams release more carbon dioxide than they absorb.

Numerous researchers are looking at the impact of climate change on the Alps. And one of the most obvious effects is the low snowfall observed in recent years. EPFL researchers have discovered that this lack of snow also has an impact on mountain streams. We have known for some ten years now that these streams, together with the Alps’ lakes and rivers, release a large amount of carbon dioxide (CO2) into the atmosphere as a naturally occurring phenomenon. But the study shows that a warm winter with little snowfall can change all this. The lack of snow means that once spring comes, the streams release more CO2 than they absorb. “This is the first study that shows the impact of climate change on the global carbon cycle in alpine streams,” explains Tom Battin, director of the Stream Biofilm and Ecosystem Research Laboratory (SBER) and co-author of the study, which has just been published in the journal Ecosystems.

Comparing two winters
This phenomenon was reported after researchers compared data from two consecutive winters – the winter of 2012-2013, which was considered normal, and that of 2013-2014, which was exceptionally warm. “After a normal winter, our study showed that during a 70-day ‘magic window,’ the streams absorb more carbon dioxide through photosynthesis than they produce naturally,” explains Amber Ulseth, a researcher at SBER and lead author of the study. “After a warm winter with very little snowfall, more production of CO2 takes places during the spring, which means that the streams release more carbon dioxide than they absorb. There is no magic window, and the alpine streams become a net producer of CO2.”

At this stage, it is still hard for the researchers to measure the exact quantity of CO2 released into the atmosphere. They can, however, determine some of the potential consequences. The rivers fed by these small alpine streams will, for example, receive less organic carbon with less snowmelt to drive their metabolism. Less snowmelt could have a worrying impact on the entire ecosystem, as it may end up altering the water flow. The study’s authors also think it would be worth studying the impact that this is likely to have on the hydroelectric network that relies on these rivers – particularly the dams – and the potential consequences to the carbon cycle within these alpine streams.

High-tech sensors
To better understand how these mountain streams behave, the latest generation of environmental sensors were deployed for 18 months in 12 streams that run into the River Ybbs in the Austrian foothills. The sensors were placed between 700 and 1,500 meters above sea level and measured the region’s water ecosystem – a first in this kind of study. Every five minutes they measured three parameters: light intensity, streamwater temperature and oxygen levels. With this data, it was possible to observe the photosynthesis process and the ecosystem’s “carbon respiration,” which in turn provided information on the carbon flux. “This research couldn’t have been conducted ten years ago because the sensors we used didn’t exist,” says Ulseth. “By collecting data every five minutes, we could really take each stream’s pulse and measure the metabolism of the entire ecosystem.”

Battin’s teams are now going further in their research. For the past year, they have been working on 12 streams located in Valsorey, Champéry and the Val Ferret in Valais Canton, and in the Vallon de Nant in Vaud Canton. The researchers have been taking more in-depth measurements across this region, which is higher and larger than the region in the Austrian foothills used for the previous study. And instead of three parameters, ten parameters are being measured every ten minutes using new sensors. This phase of the research project is being supported by EPFL Valais-Wallis, the Swiss National Science Foundation and the European “C-Cascades” project, which is aimed at better understanding the role of the carbon cycle in regulating the climate.

For around three years, the researchers will collect millions of data – a method that has become essential in environmental science. To process the data, Battin’s team is working closely with the new Swiss Data Science Center, a joint venture between EPFL and ETH Zurich with offices in both Lausanne and Zurich.