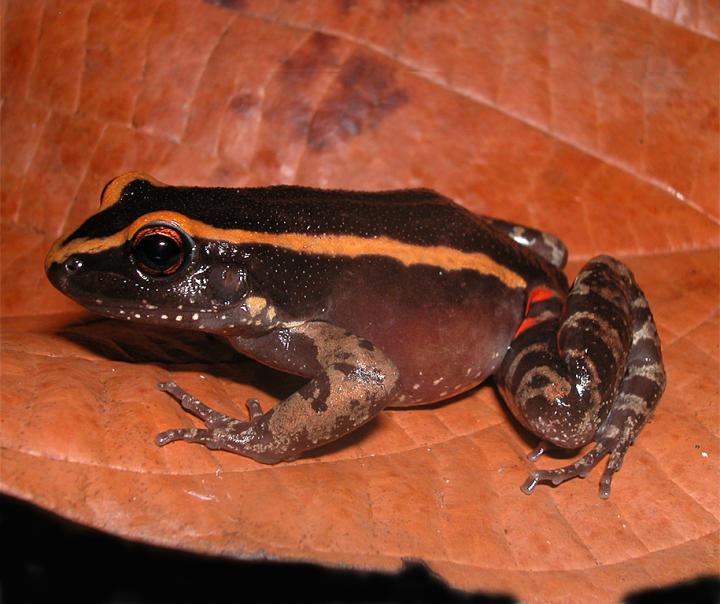 This is the Lithodytes lineatus. Source: Albertina Pimentel Lima

The Amazon rainforest is a lush ecosystem filled with interesting creatures, but scientists found one denizen that uses a notable tool to keep itself safe from predators.

A small yellow striped Amazonian frog, Lithodytes lineatus, harnesses a chemical-based mimicry and camouflage system designed to shield itself from leaf-cutting ants, which are aggressive attackers when they feel threatened.

This defense system is typically seen in parasites, but usually not vertebrates, according to Springer, which published this study.

André Barros, Ph.D., the lead study author and researcher at Brazil’s National Institute of Amazonian Research, conducted two sets of field experiments to observe how this ambitious amphibian can hide itself.

His team placed the Lithodytes frogs, four similar species of frogs, and leaf-cutting ants in a glass vessel where they watched what would happen in a 10- minute period. The other four frogs frantically tried to escape, whereas the Lithodytes remained calm.

Another experiment involved the scientists placing 20 Rhinella major frogs in glass containers with the ants. One half was covered in skin extract from the Lithodytes lineatus while the others were administered ultrapure water. Results had shown 10 frogs covered in the skin extract remained safe while the ants attacked the remainder of the group.

“Our results demonstrate that the skin of frog Lithodytes lineatus has chemicals that prevent the attack of two species of leaf-cutting ants,” said Barros in a statement.

Ultimately, the team said it felt these creatures emitted a pheromone that imitates the one the leaf-cutting ants use to communicate in their colonies, therefore allowing the frogs to mate and build their nests.

One potential reason for this result is that these ant hills offer a stable environment with higher humidity in order to support reproduction and egg development.

These findings were published in the journal Behavioral Ecology and Sociobiology.