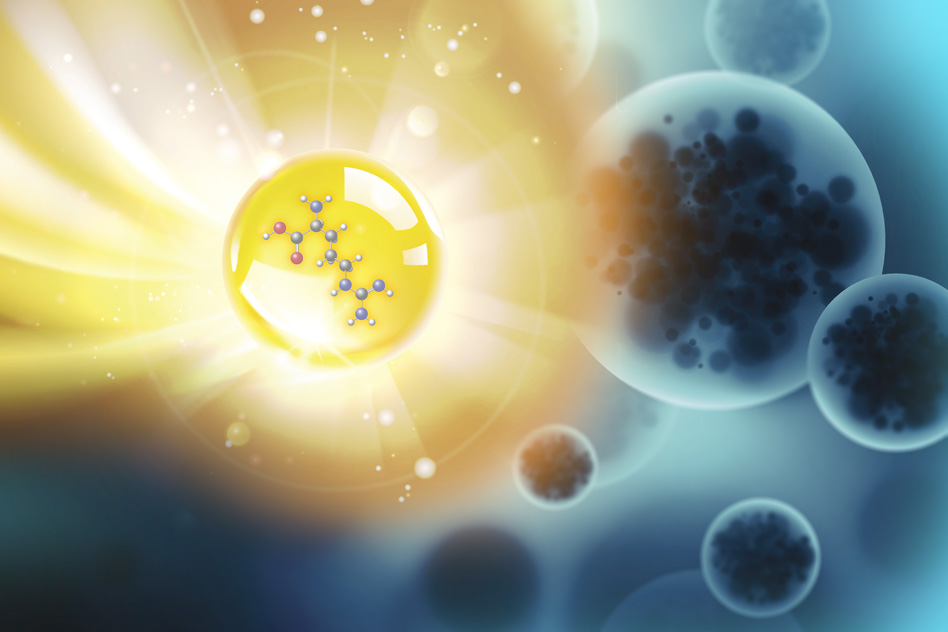 Researchers are hoping to use nanotechnology to develop more targeted treatments for drug-resistant bacteria. In this illustration, an antimicrobial peptide is packaged in a silicon nanoparticle to target bacteria in the lung. Image: Jose-Luis Olivares/MIT

Antibiotic resistance is a growing problem, especially among a type of bacteria that are classified as “Gram-negative.” These bacteria have two cell membranes, making it more difficult for drugs to penetrate and kill the cells.

Researchers from MIT and other institutions are hoping to use nanotechnology to develop more targeted treatments for these drug-resistant bugs. In a new study, they report that an antimicrobial peptide packaged in a silicon nanoparticle dramatically reduced the number of bacteria in the lungs of mice infected with Pseudomonas aeruginosa, a disease causing Gram-negative bacterium that can lead to pneumonia.

This approach, which could also be adapted to target other difficult-to-treat bacterial infections such as tuberculosis, is modeled on a strategy that the researchers have previously used to deliver targeted cancer drugs.

“There are a lot of similarities in the delivery challenges. In infection, as in cancer, the name of the game is selectively killing something, using a drug that has potential side effects,” says Sangeeta Bhatia, the John and Dorothy Wilson Professor of Health Sciences and Technology and Electrical Engineering and Computer Science and a member of MIT’s Koch Institute for Integrative Cancer Research and Institute for Medical Engineering and Science.

Bhatia is the senior author of the study, which appears in the journal Advanced Materials. The lead author is Ester Kwon, a research scientist at the Koch Institute. Other authors are Matthew Skalak, an MIT graduate and former Koch Institute research technician; Alessandro Bertucci, a Marie Curie Postdoctoral Fellow at the University of California at San Diego; Gary Braun, a postdoc at the Sanford Burnham Prebys Medical Discovery Institute; Francesco Ricci, an associate professor at the University of Rome Tor Vergata; Erkki Ruoslahti, a professor at the Sanford Burnham Prebys Medical Discovery Institute; and Michael Sailor, a professor at UCSD.

As bacteria grow increasingly resistant to traditional antibiotics, one alternative that some researchers are exploring is antimicrobial peptides — naturally occurring defensive proteins that can kill many types of bacteria by disrupting cellular targets such as membranes and proteins or cellular processes such as protein synthesis.

A few years ago, Bhatia and her colleagues began investigating the possibility of delivering antimicrobial peptides in a targeted fashion using nanoparticles. They also decided to try combining an antimicrobial peptide with another peptide that would help the drug cross bacterial membranes. This concept was built on previous work suggesting that these “tandem peptides” could kill cancer cells effectively.

For the antimicrobial peptide, the researchers chose a synthetic bacterial toxin called KLAKAK. They attached this toxin to a variety of “trafficking peptides,” which interact with bacterial membranes. Of 25 tandem peptides tested, the best one turned out to be a combination of KLAKAK and a peptide called lactoferrin, which was 30 times more effective at killing Pseudomonas aeruginosa than the individual peptides were on their own. It also had minimal toxic effects on human cells.

To further minimize potential side effects, the researchers packaged the peptides into silicon nanoparticles, which prevent the peptides from being released too soon and damaging tissue while en route to their targets. For this study, the researchers delivered the particles directly into the trachea, but for human use, they plan to design a version that could be inhaled.

After the nanoparticles were delivered to mice with an aggressive bacterial infection, those mice had about one-millionth the number of bacteria in their lungs as untreated mice, and they survived longer. The researchers also found that the peptides could kill strains of drug-resistant Pseudomonas taken from patients and grown in the lab.

Infectious disease is a fairly new area of research for Bhatia’s lab, which has spent most of the past 17 years developing nanomaterials to treat cancer. A few years ago, she began working on a project funded by the Defense Advanced Research Projects Agency (DARPA) to develop targeted treatments for infections of the brain, which led to the new lung infection project.

“We’ve adapted a lot of the same concepts from our cancer work, including boosting local concentration of the cargo and then making the cargo selectively interact with the target, which is now bacteria instead of a tumor,” Bhatia says.

She is now working on incorporating another peptide that would help to target antimicrobial peptides to the correct location in the body. A related project involves using trafficking peptides to help existing antibiotics that kill Gram-positive bacteria to cross the double membrane of Gram-negative bacteria, enabling them to kill those bacteria as well.

The research was funded by the Koch Institute Support Grant from the National Cancer Institute, the National Institute of Environmental Health Sciences, and DARPA.