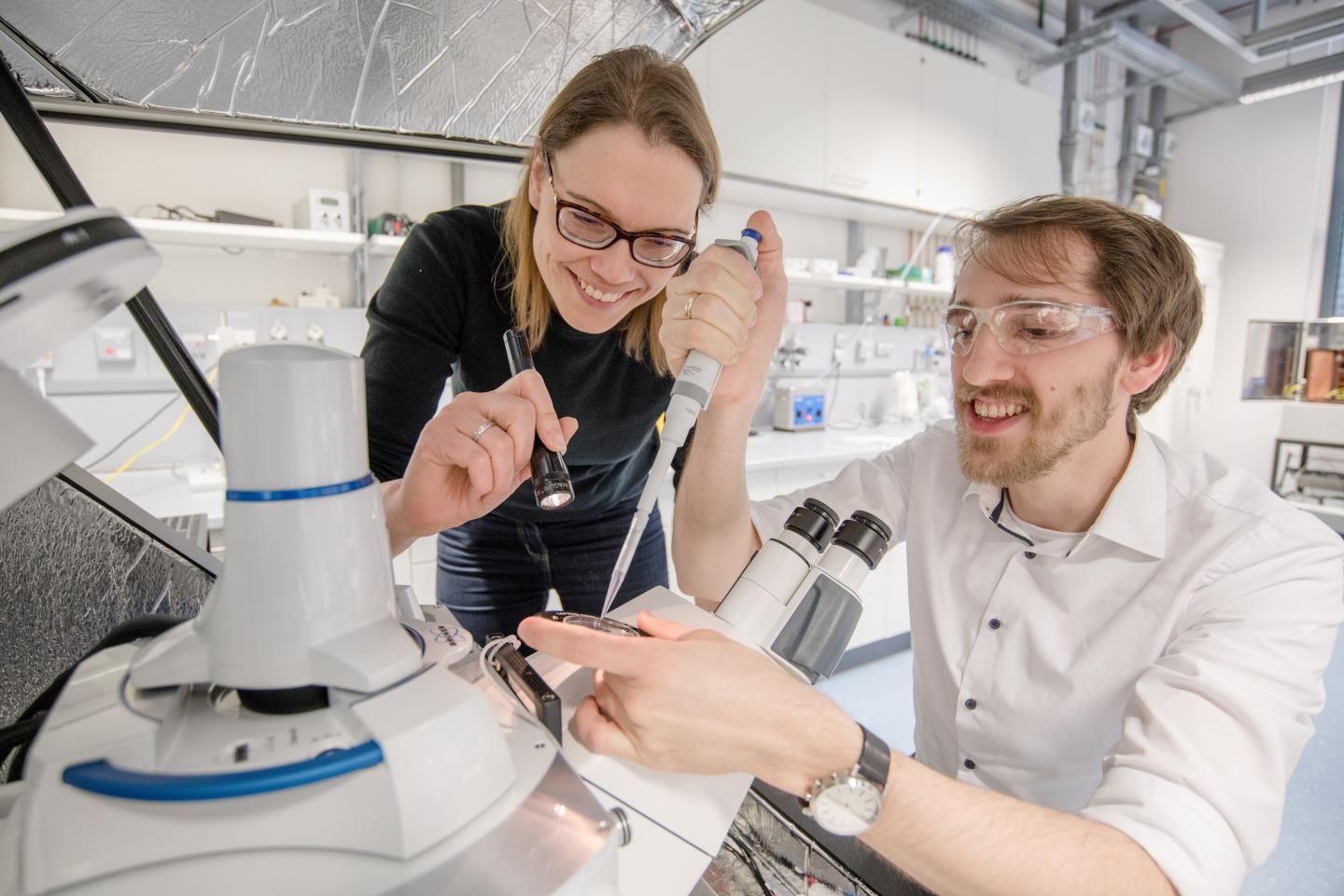 Kristina Tschulik and Mathies Evers develop methods that help to use rare and expensive precious metal nanoparticles as sparingly as possible for catalysis. Credit: RUB, Marquard

Researchers at Ruhr-Universität Bochum and the Fritz Haber Institute Berlin have developed a new method of using rare and expensive catalysts as sparingly as possible. They enclosed a precious metal salt in outer shells, tiny micelles, and had them strike against a carbon electrode, thus coating the surface with nanoparticles of the precious metal contained in the micelles. At the same time, the team was able to precisely analyse how much of the metal was deposited. The researchers then showed that the electrode coated in this manner could efficiently catalyse the oxygen reduction, which is the limiting chemical process in fuel cells.

The team led by Professor Kristina Tschulik and Mathies Evers from the Bochum Research Group for Electrochemistry and Nanoscale Materials describes the process in the journal Angewandte Chemie, published online in advance on 11 April 2019.

Producing particles of the same size

The research group produced the gold nanoparticles with the help of micelles. The particles initially consisted of a precursor substance, chloroauric acid, which was wrapped in an outer polymer shell. The benefit: “When we produce gold nanoparticles using micelles, the nanoparticles are all of an almost identical size,” says Kristina Tschulik, a Principal Investigator of the Cluster of Excellence Ruhr Explores Solvation (Resolv). Only a certain load of the precursor material, from which a single particle of a certain size is produced, fits inside the small micelles. “As particles of different sizes have different catalytic properties, it is important to control the particle size by means of the load quantity of the micelle,” adds Tschulik.

Uniform coating, even on complex surfaces

To coat the cylindrical electrode, the researchers immersed it in a solution containing the loaded micelles and applied a voltage to the electrode. The random motion of the micelles in the solution caused them to strike against the electrode surface over time. There, the outer shell burst open and the gold ions from the chloroauric acid reacted to form elemental gold, which adhered to the electrode surface as a uniform layer of nanoparticles. “Only flat substrates can be coated uniformly with nanoparticles using standard methods,” explains Tschulik. “Our process means that even complex surfaces can be loaded uniformly with a catalyst.”

While the gold ions from the chloroauric acid react to form elemental gold, electrons flow. By measuring the resulting current, the chemists can determine exactly how much material was used to coat the electrode. At the same time, the method registers the impact of each individual particle and its size.

The researchers successfully tested the oxygen reduction reaction of the electrodes coated using the new process. They achieved an activity as high as that of naked gold nanoparticles without an outer shell. Due to the uniform coating of the surface, they also observed a reaction rate almost as high as that of electrodes completely covered with gold and solid gold electrodes at just eleven percent coverage.