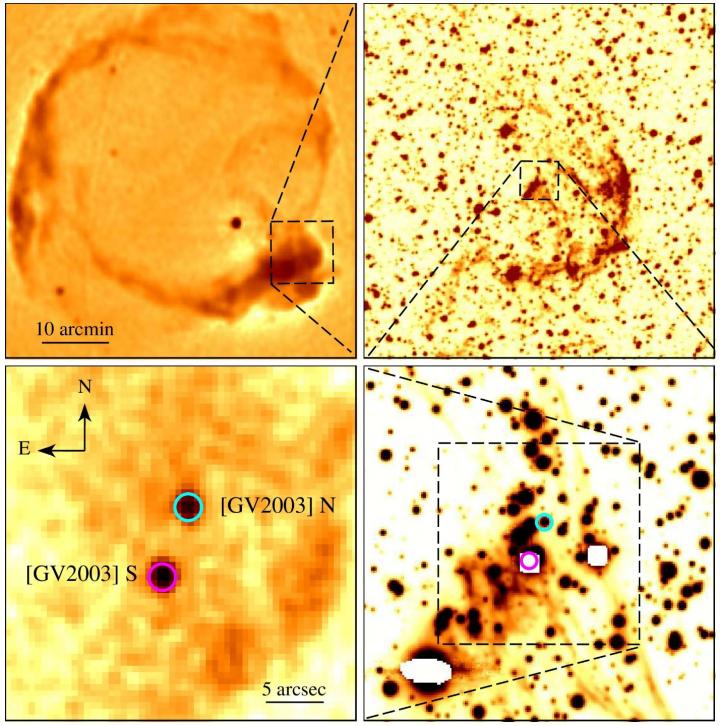 From the upper left, clockwise: 843-MHz image of RCW 86; image of an arc-like optical nebula in the southwest corner of RCW 86; optical and x-ray images of two point sources, [GV2003] N and [GV2003] S, in the centre of the optical arc. Source: Vasilii Gvaramadze

An international team of astrophysicists led by a scientist from the Sternberg Astronomical Institute of the Lomonosov Moscow State University reported the discovery of a binary solar-type star inside the supernova remnant RCW 86. Spectroscopic observation of this star revealed that its atmosphere is polluted by heavy elements ejected during the supernova explosion that produced RCW 86. In particular, it was found that the calcium abundance in the stellar atmosphere exceeds the solar one by a factor of six, which hints at the possibility that the supernova might belong to the rare type of calcium-rich supernovae – the enigmatic objects, whose origin is yet not clear. The research results are published in Nature Astronomy on 2017 April, 24.

The evolution of a massive star ends with a violent explosion called a supernova. The central part of the exploded star contracts into a neutron star, while the outer layers expand with a huge velocity and form an extended gaseous shell called supernova remnant (SNR). Currently, several hundreds of SNRs are known in the Milky Way, of which several tens were found to be associated with neutron stars. Detection of new examples of neutron stars in SNRs is very important for understanding the physics of supernova explosions.

In 2002 Vasilii Gvaramadze, a scientist from the Sternberg Astronomical Institute, proposed that the pyriform appearance of RCW 86 can be due to a supernova explosion near the edge of a bubble blown by the wind of a moving massive star – the supernova progenitor star. This allowed him to detect a candidate neutron star, currently known as [GV2003] N, associated with RCW 86 using the data from the Chandra X-ray Observatory.

If [GV2003] N is indeed a neutron star, then it should be a very weak source of optical emission. But in the optical image obtained in 2010, a quite bright star was detected at the position of [GV2003] N. This could mean that [GV2003] N was not a neutron star. Vasilii Gvaramadze, the leading author of the Nature Astronomy publication, explains: “In order to determine the nature of the optical star at the position of [GV2003] N, we obtained its images using seven-channel optical/near-infrared imager GROND at the 2.2-metre telescope of the European Southern Observatory (ESO). Spectral energy distribution has shown that this star is of solar type (so-called G star). But since the X-ray luminosity of the G star should be significantly less than that was measured for [GV2003] N, we have come to a conclusion that we deal with a binary system, composed of a neutron star (visible in X-rays as [GV2003] N) and a G star (visible in optical wavelengths)”.

The existence of such systems is a natural result of massive binary star evolution. Recently, it was recognized that the majority of massive stars form in binary and multiple systems. When one of the stars explodes in a binary system, the second one could become polluted by heavy elements, ejected by a supernova.

To check the hypothesis that [GV2003] N is a binary system, astrophysicists have got four spectra of the G star in 2015 with the Very Large Telescope (VLT) of the ESO. It was found that the radial velocity of this star has significantly changed during one month, which is indicative of an eccentric binary with an orbital period of about a month. The obtained result has proved that [GV2003] N is a neutron stars and that RCW 86 is the result of supernova explosion near the edge of a wind-blown bubble. This is very important for understanding the structure of some peculiar SNRs as well as for detection of their associated neutron stars.

Until recently, the most popular explanation of the origin of the calcium-rich supernovae was the helium shell detonation on low-mass white dwarfs. The results obtained by Vasilii Gvaramadze and his colleagues, however, imply that under certain circumstances a large amount of calcium could also be synthesized by explosion of massive stars in binary systems.

Vasilii Gvaramadze sums up: “We continue studying [GV2003] N. We are going to determine orbital parameters of the binary system, estimate the initial and final masses of the supernova progenitor, and the kick velocity obtained by the neutron star at birth. Moreover, we are also going to measure abundances of additional elements in the G star atmosphere. The obtained information could be crucially important for understanding the nature of the calcium-rich supernovae”.