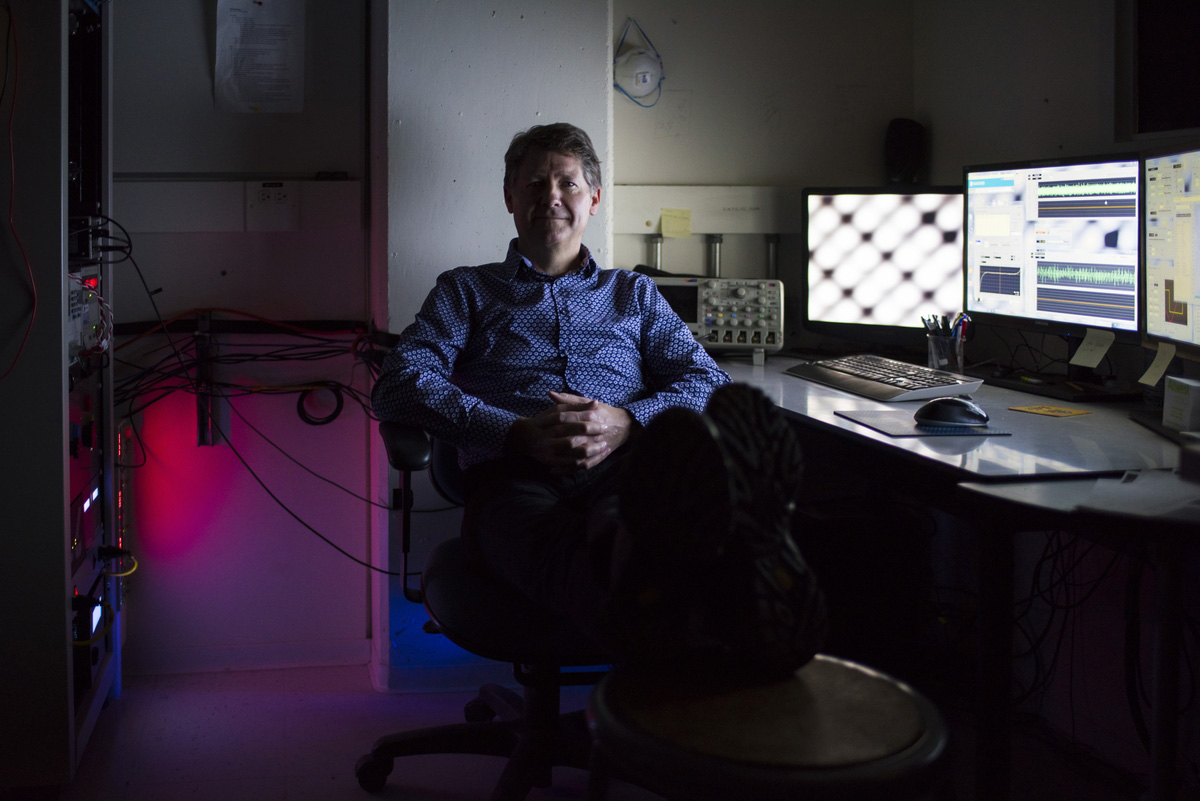 A key step in unlocking the potential for greener, faster, smaller electronic circuitry was taken recently by a group of researchers led by UAlberta physicist Robert Wolkow.

The research team found a way to delete and replace out-of-place atoms that had been preventing new revolutionary circuitry designs from working. This unleashes a new kind of silicon chips for used in common electronic products, such as our phones and computers.

“For the first time, we can unleash the powerful properties inherent to the atomic scale,” explained Wolkow, noting that printing errors on silicon chips are inevitable when working at the atomic scale. “We were making things that were close to perfect but not quite there. Now that we have the ability to make corrections, we can ensure perfect patterns, and that makes the circuits work. It is this new ability to edit at the atom scale that makes all the difference.”

Think of a typing mistake and the ability to go back and white it out and type it again perfectly. Now imagine that the white out is actually single hydrogen atoms, allowing a level of precision previously unattainable.

“We can precisely erase any errors and reprint that atom in the correct place. It’s not even a compromise like white out where you either have a gooey layer or indentation. It’s actually perfect,” said Wolkow, who worked with fellow scientists from the University of Alberta, the National Research Council, and Quantum Silicon Inc.

Scientists have seen many hints that atomic circuitry was within reach. However, the necessary precision was previously possible only for simple materials that had to be maintained at ultra-low temperatures, impractical for everyday applications demanded in computers and personal digital devices. Wolkow and his team have discovered methods and material to ensure stability at room temperature, challenges that he and other scientists the world over have been working for decades on overcoming.

Wolkow’s graduate students Roshan Achal and Taleana Huff together with postdoc Moe Rashidi showed they can overcome these obstacles with a modified approach to the same silicon chips that are used in today’s circuitry. While they had previously improved accuracy of atomic silicon printing, errors in the form of misplaced atoms always occurred at the one percent level. Though the placement errors were small—about one third of a nanometer—they nevertheless large enough to upset circuit operation.

The students created a reliable procedure for picking up single hydrogen atoms with their atomically sharp probe and replacing one or more hydrogen atoms to perfectly erase atomic misprints.

With their new discovery, many remaining challenges to ultra-low power atomic circuitry have also been erased. Wolkow, Achal, and Huff’s discovery has been captured in the academic paper “Atomic Whiteout,” appearing in the scientific journal ACS Nano. doi:10.1021/acsnano.7b04238