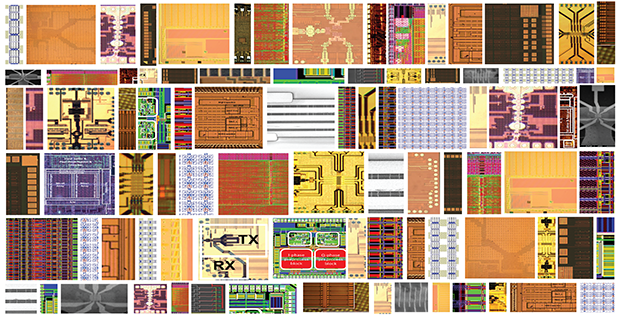 The patchwork of microelectronic dies represents work performed by a multitude of university groups that participated in previous DARPA-industry-academe collaborations. DARPA’s new electronics initiative is pushing for a new era of microsystem structures and capabilities.

The Department of Defense’s proposed FY 2018 budget includes a $75 million allocation for DARPA in support of a new, public-private “electronics resurgence” initiative. The initiative seeks to undergird a new era of electronics in which advances in performance will be catalyzed not just by continued component miniaturization but also by radically new microsystem materials, designs, and architectures. The new funds will supplement the Agency’s FY 2018 R&D portfolio in electronics, photonics, and related systems to create a coordinated effort valued at more than $200 million, to be further supplemented by significant commercial sector investments.

The new initiative comes at a time when the microsystems technology community is facing an array of long-anticipated obstacles to its relentless and storied decades-long march of progress. The microelectronics revolution—which began after World War II with the invention of the transistor and led to today’s chips bearing billions of these now astoundingly minuscule digital switches—has arrived at an inflection point, beyond which innovators will no longer be able to rely solely on the benefits of cramming more and more electronic devices into smaller and smaller spaces.

“For nearly seventy years, the United States has enjoyed the economic and security advantages that have come from national leadership in electronics innovation,” said Bill Chappell, director of DARPA’s Microsystems Technology Office (MTO), which will lead the new effort. “If we want to remain out front, we need to foment an electronics revolution that does not depend on traditional methods of achieving progress. That’s the point of this new initiative – to embrace progress through circuit specialization and to wrangle the complexity of the next phase of advances, which will have broad implications on both commercial and national defense interests.”

To appreciate the magnitude of the change the initiative aims to achieve, it helps to look back at the last such paradigm shift, which quietly became public on July 1, 1948. That’s when the word “transistor” made its understated debut on page D4 of the New York Times. That day’s “The News of Radio” column started out with descriptions of two new radio shows but ended with a bit of obscure technology news: “A device called the transistor, which has several applications in radio where a vacuum tube ordinarily is employed, was demonstrated for the for the first time yesterday.” The shift from vacuum tubes to transistors would prove monumental, kicking off more than 70 years of electronics improvements based on these increasingly minuscule components.

Ten years after the rollout of the transistor, for example, Jack Kilby of Texas Instruments demonstrated the first integrated circuit—a breakthrough in which all circuit components shared space aboard a single chip of semiconductor material and opened the pathway to what has been a relentless sprint of seemingly miraculous transistor miniaturization. Nothing could be more emblematic of modernity than the countless microelectronic chips underlying today’s vast and varied technoscape. The essence of that pathway from discreet transistors in the 1940s to the billions that engineers now integrate on individual chips often is referred to as “scaling.” DARPA, which was founded in 1958, the same year Kilby introduced integrated circuits, supported many of the breakthroughs that enabled that evolutionary trek through the Silicon Age, including fundamental advances in semiconductor materials, massive-scale integration, and precision manufacturing.

But there always has been a finish line on the horizon. The fantastic saga of electronics miniaturization that has yielded ever more computing power at ever-lower unit costs—represented by the famed Moore’s Law (named after Intel’s co-founder Gordon Moore)—has always been destined to encounter the limitations of both physics and economics. As this inflection point nears, continued progress in microelectronics will require a new phase of innovation to keep the modern miracle of electronics innovation moving forward.

This inflection point would mark not only a flattening in one of the most consequential technological trajectories in the history of humanity, but also the beginning of what likely will be an even more audacious era of technological creativity and advance. This is where the DARPA initiative comes in.

By focusing on the development of new materials for use in electronic devices, new architectures for integrating those devices into complex circuits, and software and hardware design innovations for transforming microsystem designs into reality far more efficiently than ever before, the initiative aims to ensure continued improvements in electronics performance even without the benefit of traditional scaling. Over the coming months, DARPA’s MTO will engage with the microelectronics community through technology discussions, workshops, and other channels to forge a collaborative, cost-shared research agenda to usher microsystems into an exciting new age of innovation. The new research effort will complement DARPA’s recently created Joint University Microelectronics Program (JUMP), the largest University research effort in basic electronics, co-funded by DARPA and Semiconductor Research Corporation, an industry consortium.

The materials portion of the initiative will explore the use of unconventional circuit ingredients to substantially increase circuit performance without requiring smaller transistors. Although silicon is the most familiar microsystem material and compound semiconductors such as silicon germanium already play niche roles, these materials offer limited flexibility in function and reside in a single planar layer. The initiative will show that the Periodic Table provides a vast reservoir of candidate materials for next-generation logic and memory components. Research will unfold with an eye on integrating different semiconductor materials on individual chips, “sticky logic” devices that combine processing and memory functions, and vertical rather than only planar integration of microsystem components.

The architecture portion of the initiative will examine circuit structures that are optimized to the specific tasks they perform. Graphics processing units, which underlie much of the ongoing progress in machine learning, have already demonstrated the performance improvement derived from specialized hardware architectures. The initiative will explore other opportunities, such as reconfigurable physical structures that adjust to the needs of the software they support.

The design portion of the initiative will focus on developing tools for rapidly designing and realizing specialized circuits. Unlike general-purpose circuitry, specialized electronics can be much faster and more energy efficient. Although DARPA has consistently invested in these application-specific integrated circuits (ASICs) for military use, ASICs can be costly and time-consuming to develop. New design tools and an open-source design paradigm could be transformative, enabling innovators to rapidly and cheaply create specialized circuits for a range of commercial applications.

“The proliferation and increasing sophistication of microelectronics—and the computing, communications, navigation, and countless other technologies that depend on those electronics—have been astounding, and have primarily happened with essentially the same silicon-based approach,” said Chappell. “Look at how much the world has changed as a result of mobile phone technology alone in just the past ten years. To keep this pace of progress moving forward even as we lose the benefit of conventional scaling, we need to break away from tradition and embrace the kinds of innovations that the new initiative is all about. We are looking forward to working with the commercial sector, the defense industrial base, academia, the national laboratories, and other hotbeds of innovation to initiate the next electronics revolution.”