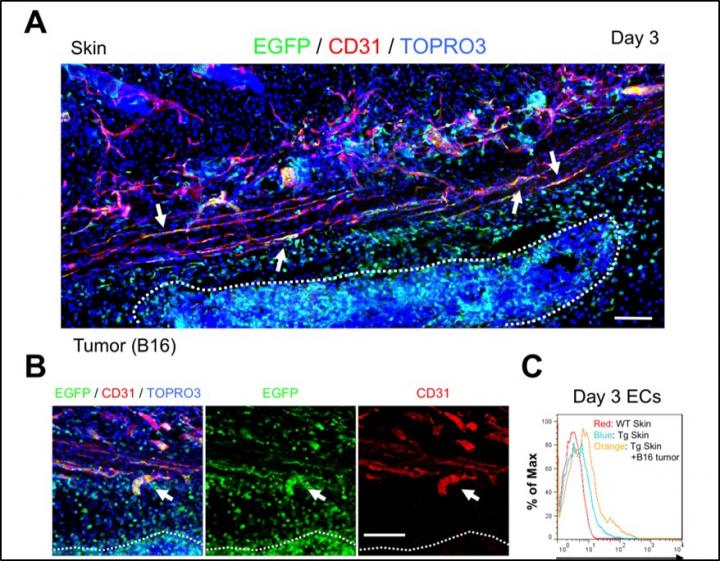 Angiogenesis, the formation of new blood vessels, is essential for tumor growth. A new studyreported in The American Journal of Pathologydescribes a vascular stabilization biomarker that can visualize blood vessel activity, thus optimizing the timing of anticancer therapies including anti-angiogenics.

No EGFP signals were observed in normal adult skin vasculature, which was expected as normal skin ECs are dormant. However, after subcutaneous injection of tumor cells, some ECs in and near the tumor shifted to EGFP-positivity. PSF1 promotor activity was also found to correlate well with tumor cell growth. ECs that were high in EGFP expression were larger and had greater intracellular complexity than cells that were EGFP negative. “Our data showed that PSF1-promotor-EGFP mice may be utilized to visualize proliferating ECs by their EGFP expression,” commented Dr. Takakura.

These results enabled researchers to successfully distinguish between proangiogenic ECs and quiescent ECs by their PSF1 gene promoter activity, which is associated with DNA replication and rapid proliferation of somatic cells. Therefore, CD109 expression in ECs marked normalized or silenced blood vessels in the tumor vasculature.

“Since CD109 is highly expressed in dormant ECs, we suggest it can be used to detect normalized blood vessels, thus allowing identification of the ‘window of opportunity’ for optimal delivery of chemotherapeutics,” remarked Dr. Takakura.