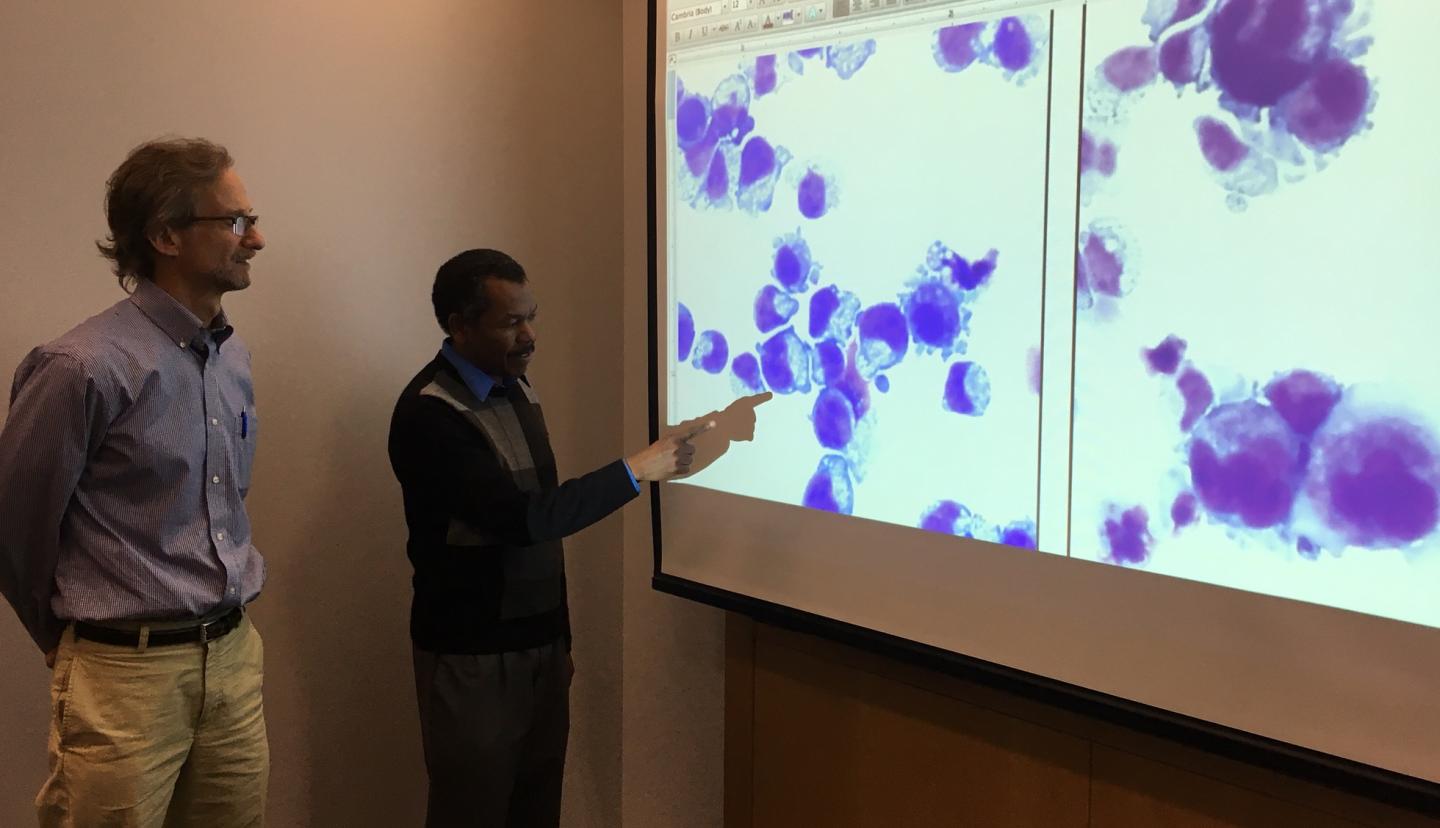 Adam Goldfarb, MD, (left) and Kamal Elagib, MBBS, PhD, examine the effects of flipping the “master switch” they discovered. One set of cells displays characteristics of infantile megakaryocytes, while the other displays characteristics of adult megakaryocytes. The ability to toggle between the two could be a big benefit to doctors. Source: Josh Barney | UVA Health System

The emergency call issued by the American Red Cross earlier this year was of a sort all too common: Donations of platelets were needed, and desperately. But a new discovery from the University of Virginia School of Medicine may be the key to stopping shortages of these vital blood-clotting cells, cells that can represent the difference between life and death.

The finding also could offer big benefits for premature babies, opening the door to new treatments for a serious condition called neonatal thrombocytopenia that affects up to 30 percent of babies in neonatal intensive care units.

The UVA researchers have identified a “master switch” that they may be able to manipulate to overcome the obstacles that have prevented doctors from producing platelets in large quantities outside the body. “The platelet supply is limited and the demand is growing,” said researcher Adam Goldfarb, MD, of UVA’s Department of Pathology. “The quantities we can produce outside the body are very, very small, and the inability to scale up right now is a major roadblock. We think that our understanding of this pathway is actually a critical step toward fixing that problem.”

Scientists also may be able to use this master switch to battle neonatal thrombocytopenia, a condition that complicates the care of babies who are already at great risk. “It turns out in premature infants and newborns that [the platelet] reserve is compromised. They are less capable of responding to distress and the demand for increased platelet production,” Goldfarb said. “A goodly percentage of those babies, these tiny little babies, require platelet transfusions to keep their platelets up.”

The switch discovered by Goldfarb’s team controls whether the bone marrow produces cells called megakaryocytes of the type seen in adults or of the sort found in infants. This is important because the adult and infantile versions have very different specialties: Adult megakaryocytes are great at making platelets. Lots and lots of them. Infantile megakaryocytes, on the other hand, are much smaller cells, and they concentrate on dividing to produce more megakaryocytes.

The ability to toggle between the two could be a huge asset for doctors. Now, doctors cannot produce large quantities of platelets in the lab and instead must rely on platelet donations for patients. The new finding, however, may help change that. “It’s thought that in our bodies every single megakaryocyte produces like a thousand platelets, and when you do it in culture [outside the body] it’s like 10,” he said. “We think the pathway we’re studying enhances the efficiency of platelet release, and this pathway, we think, could be manipulated in both directions: to suppress the pathway to promote the growth [of megakaryocytes] and then to activate the pathway at some point to enhance the efficiency of platelet release.”

For example, babies might be given a drug that would prompt their bodies to make more platelets. Researcher Kamal Elagib, MBBS, PhD, noted that the research team already has identified compounds that can flip the switch in the lab, but that those compounds likely aren’t the best option for treatment: “Those inhibitors have multiple effects, so there would be side effects,” he said.

The researchers, however, have already identified other drugs that look much more promising. “Our future efforts that Kamal is working on now are to identify better, cleaner, more effective approaches at flipping this switch,” Goldfarb said. “Understanding this process could really enhance the future approaches towards treating patients with low platelet counts.”