Researchers have developed a moldable bone substitute called Novogro Putty that can be implanted into the site of a bone fracture and degrades as the bone naturally heals.

Sarit Bhaduri, PhD, the co-founder of OsteoNovus, the Ohio-based company responsible for the innovation, said that what sets Novogro Putty apart is that it naturally dissolves in the body, rather than remaining in the bone.

“It is perfectly biocompatible and eventually dissolves in the body,” said Bhaduri, in an exclusive interview with R&D Magazine.  “Everybody else, they have a composition that is biocompatible, but it does not degrade in the body. We prefer something that degrades in the body and the actual bone takes its place. So if you have a complex injury, you can inject the other guys stuff and it will remain there and not go away.”

In its granular form, NovoGro consists of an inorganic composite and a biodegradable polymer that imparts the proper rheological property. The inorganic constituents are dicalcium phosphate anhydrate (CaHPO4, DCPA or Monetite) and magnesium hydrogen phosphate trihydrate (MgHPO4·3H2O, Newberyite) bonded by a silica sol (SiO2). The ceramic granules are then mixed with carboxymethyl cellulose (CMC) to ensure injectability.

According to Bhaduri, DCPA is the compound that allows the material to degrade in the body, not just remain in the bones.  Most bone graft substitutes use hydroxyapatites, which are not resorbable. The present composition also contains Newberyite, which has a high dissolution rate and has the best resorption kinetics of the known magnesium phosphate compounds, as the secondary phase.

The addition of silica sol elicits enhanced biological responses and plays an essential role in the bone healing process. The material also acts as a binder to reduce disintegration of the graft and debris released from the graft surface.

To process the material, the researchers use standard chemical reagents that contain relevant ions that undergo self-setting cement reactions. They initially use a microwave-assisted process to trigger an acid-base reaction and form the cement precursors. The pre-reacted product can be reconstituted with water for the final setting reaction, without exothermicity.

The granules are mixed together with a bioresorbable polymer, which preferentially dissolves before the resorption of the ceramic phases, creating macropores in the intergranular space that allow for cellular infiltration and tissue in-growth to the center of graft mass. This is followed by mineralization of tissues and remodeling the new bone during the natural bone healing process. 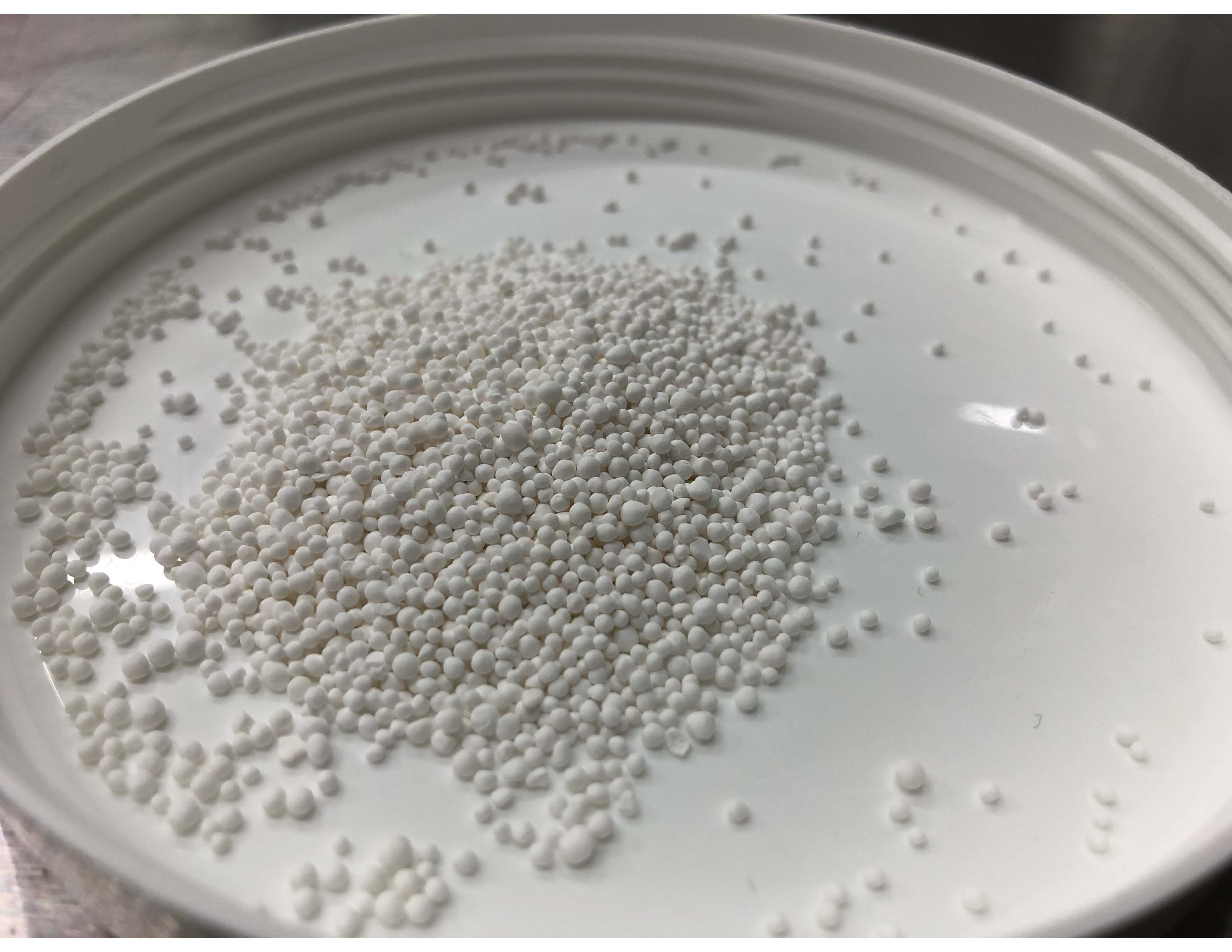 Beads (showing granules on a flat dish, which is 3 inches in diameter) Photo provided by Novogro

Bhaduri explained that most patients would only need to receive between 20 and 40 cubic centimeters of the cement-like mixture.

One of the benefits of the putty is that it will not interfere with other organs or body parts when it is injected into bones. Bhaduri also said he believes that it will even work with patients suffering from other diseases and disorders like diabetes.

“This really is a benign material, so I don’t think it will aggravate other diseases in any way but we have not of course tried any person like that or if the person is diabetic,” he said. “That would be an important application where you have complex fracture and a diabetic patient, then what happens. I would think that this will work just as good.”

The bone putty granules are generally meant to be used in situations where preexisting bone voids need to be filled.  An example of the putty used successfully is a revision surgery performed on a 52-year healthy male patient, who had an open right ankle pilon fracture that became nonunion after the original surgery because of an osteomyelitis condition with an infection caused by Staphylococcus epidermidis.

After six months, the patient was able to carry a load and his ankle was stable with no pain and minimal edema. The healing process continued with bone bridging medially across the fracture where the putty was implanted, which was not observed radiographically, appearing to be remodeled entirely by de novo bone.

The U.S. Food and Drug Administration approved the NovoGro Putty in 2017 and the researchers are currently develop a new version called NovoGro Injectable.